Today we turn the spotlight on seven actors who delivered singular performances in 2018. Many more than once: Denver native Zachary Andrews comes from serious theatre pedigree. (After all, his parents have been subscribers to the DCPA Theatre Company for 40 years.) Andrews has been doing yeoman work in the local theatre and film communities for years, notably of late as Mr. Darcy in Boulder Ensemble Theatre Company’s production of Pride and Prejudice and as a returning member of the Arvada Center’s repertory acting company. But Andrews showed some mettle in Paper Cut that we have not seen out of him before. Andrews showed uncanny ease and naturalness playing a likable, centered soldier who defies every expectation of a West Virginian tough guy when he decides, once stateside, to openly pursue a burgeoning relationship with a fellow soldier who had his leg blown off back in Afghanistan.

Critics corner: “The liveliest scenes are between Sommer Carbuccia and Zachary Andrews as a goofy and convincing military man named Chuck, in large part because there’s something actually happening between the two of them, as well as genuine humor.” Juliet Wittman, Westword DCPA Teaching Artist Brian Landis Folkins has been a member of Curious Theatre’s acting company since 2012, and early this year he did some heavy lifting in Tony Kushner’s epic The Intelligent Homosexuals Guide… He followed that up with one of the plumbest roles of his local stage career: As a republican Senator from North Carolina who is up for re-election just weeks after a gun massacre at a nearby school. Nearly every performance of the Colorado Springs Fine Arts Center at Colorado College’s Church and State was sold out, allowing the Colorado Springs community a forum to discuss the highly charged gun issue in a thoughtful and communal way. Folkins also has appeared in more than 100 short and feature films, including next year’s Hoax, starring Adrienne Barbeau about a camping trip gone wrong. He next appears in Curious Theatre’s Gloria, opening January 12. Rodney Lizcano, an award-winning comic and dramatic actor who was featured in the DCPA Theatre Company’s world-premiere production of American Mariachi that traveled to the Old Globe Theatre in San Diego after its inaugural run in Denver, moved up to leading man last summer when the Colorado Shakespeare Festival cast Lizcano to play The Bard’s most murderous and malicious king in Richard III. Lizcano is a graduate of the Denver Center’s National Theatre Conservatory.

Critics corner: “Lizcano’s masterful performance as Richard III makes for an electric and engaging night of theater. In this iteration, Lizcano is tasked with playing an eccentric 19th-century actor performing the role of the famous hunchback. Lizcano takes up that challenge effortlessly, seamlessly flipping between his varied public personas and his inner, ambitious self. While the show offers a crowd of other noteworthy performances, Lizcano is the center of this piece.” – A.H. Goldstein, The Daily Camera Michael Morgan “only” performed in two productions in 2018, but that was good enough to earn Juliet Wittman’s “Best Season by An Actor” distinction from Westword. In Bechmark’s darkly dramatic The Arsonists, he played a living corpse who haunts his surviving daughter after their last “fire for hire.” Morgan won his previous True West Award for playing Shag (a variation of William Shakespeare) in the Colorado Shakespeare Festival’s world premiere comedy Equivocation.

Critics corner: “Michael Morgan and Rebekah Goldberg are devastating in the father-daughter roles. Morgan creates a rough-hewn but loving parent. His agony as the wounded father made everyone in the audience want to comfort him.” – Beki Pineda, GetBoulder.com


Also as an actor: Alaina Beth Reel is a Denver-based actor, musician, teacher, writer and director originally from Iowa. In this, her breakout year, she made her debuts with the Curious Theatre Company (The Cake) and the DCPA Theatre Company (Colorado New Play Summit reading of David Jacobi’s The Couches). She was soaring (both literally and metaphorically) in the titular role of DCPA Education’s Master Class production of Orlando, Sarah Ruhl’s adaptation of Virginia Woolf’s original story gorgeously performed primarily on trapezes. Reel will next appear in the ensemble of the DCPA Theatre Company’s Anna Karenina. Jessica Robblee: Natalia in the Arvada Center’s The Electric Baby

Jessica Robblee is the co-mastermind of Buntport Theater for All Ages’ popular serialized adventures for young audiences. At the Denver Center, she recently returned from a glittery journey as a dancing time-travel flight attendant in Off-Center’s Drag Machine. Theatre Company credits have included Frankenstein and All the Way. She was a member of the Arvada Center’s 2018 repertory acting company. In the metaphysical new play The Electric Baby, Robblee played a Romanian mother keeping watch beside her dying child – a magical baby already half in another world, only seen by the audience as the reflection from glowing white tubes.

Critics’ corner: “I loved Jessica Robblee’s performance in the central role of sad, funny, eccentric Natalia. Robblee begins the evening with a brief lecture to the audience about coughing, and our propensity as Americans to drink enormous coffees topped with whipped cream that send us running to the toilet.” Juliet Wittman, Westword

As an actor and co-creator: 
Marco A. Robinson come into his own in 2018, mostly by playing roles that shamelessly exploited his physical attractiveness. But he made the most of every opportunity to show what a wide range he has as a comic actor, dramatic actor, singer and roller-skating dancer. He began the year playing many of the men who become the objects of the father’s hidden attractions in Miners Alley Playhouse’s Henry Award-winning family tragedy Fun Home. Next he played a graffiti tagger in Off-Center’s This is Modern Art. His debut with the Colorado Shakespeare Festival offered a double-shot of classical roles. And he finished up with Xanadu in the deceptively tricky role of a guileless artist and pretty boy named Sonny who gets some help from a goddess to realize his grand dream of … opening a roller-skating rink! That varied slate made it pretty plain Robinson is much more than a pretty face. (Though that pretty face is pretty darned pretty.)

Critics corner: “In short shorts and a tank top, Marco Robinson shows off Sonny’s biceps, triceps and lats, as well as leg muscles I hadn’t before known existed. He has a good voice, too. It must take everything he has to play a semi-serious leading man around his exuberant castmates — but he does so successfully.” Juliet Wittman, Westword 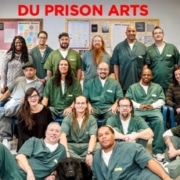 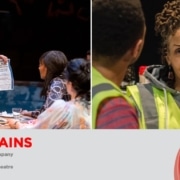 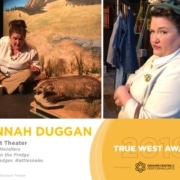 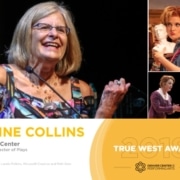 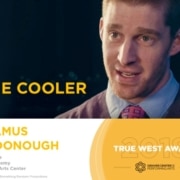 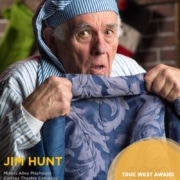