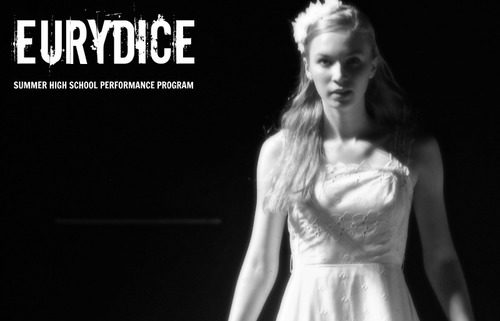 Eurydice is Sarah Ruhl’s enigmatic and lyrical re-imagining of the Orpheus myth. He’s the musician who goes to hell and back for the wife who died on their wedding night. Only this time, the story is told from Eurydice’s point of view.

The 1 p.m. and 7 p.m. performances, directed by Allison Watrous and featuring high-school performers, are free and open the public. But you are asked to email your intent to attend first by emailing academy@dcpa.org. The Conservatory Theatre is located in the Robert and Judi Newman Center for Theatre Education at the corner of 13th and Arapahoe streets.

Younger students, meanwhile, will be performing Musical Mayhem in the Stage Theatre. Those are performances by grades K through 5 and will run in 10-minute increments from 1:30 p.m. to 3 p.m. Those performances are also free but do not require an RSVP. The Stage Theatre is located in the Bonfils Theatre Complex.

Known as one of the best acting schools in town, the Denver Center Theatre Academy is open to kids ages 3 to 18. Acting lessons range from beginner to advanced and give students a wide range of skills — from props and painting to dance and drama. There’s something for everyone. For information, click here.

To help you get a better understanding of Eurydice, here is an excerpt of a review I wrote about Curious Theatre’s 2009 production:

It’s our nature to process stimuli through our heads. Eurydice is a play best filtered through the heart.

Let the love and melancholy of the timeless Orpheus myth course through you in the visually and aurally intoxicating setting of the Curious Theatre. And worry about what all those esoteric words mean later.

In Sarah Ruhl’s imaginative (and liberal) retelling of the Orpheus myth, we first see young love in full but forebodingly discordant bloom (a central metaphor). Eurydice dies but, in this world, there is no death. She emerges in the Underworld, is reunited with her beloved father and eventually found by her grieving husband.

There, a capricious young lord grants Eurydice her freedom on the impossible condition that Orpheus not look upon his love for their long journey to the surface. Following behind, she naturally calls to him. And, naturally, he looks.

For this offense, here squarely laid at Eurydice’s feet, she is forever exiled to the land below. There, heartbroken, she chooses to bathe herself in a river that expunges all memory of her husband.

The truisms are wrenchingly timeless: Gazing upon one you love but can’t touch? That feels a lot like death. And memory of a love lost is its own curse, the only relief from which might be to forget.

Though this myth has cut a pop-culture swath from Ovid to Shakespeare to Jean Anouilh to Tennessee Williams to Nick Cave, Ruhl’s take is a uniquely feminine look at a woman’s two great loves: her husband and father.