Video: Jessica Austgen being a big bully in February’s “Cult Following.” The next performance is April 10.

DCPA Teaching Artist on pride, prejudice and being seen as a 15-year-old girl with an otter obsession

Jessica Austgen is the At-Risk Coordinator and a Teaching Artist for the Denver Center’s Education Department. She heads up the STArt (Skills Through Art) Program, which teaches life skills through dramatic learning and targets at-risk and underserved populations.

She is also a geek. Seriously, a total Lord of the Rings, Veronica Mars, Lost, Benedict Cumberbatch, karaoke, Firefly geek. Which makes her the perfect addition to the cast of Off-Center @ The Jones’ Cult Following, a live, long-form improv comedy evening that returns Thursday, April 10. If you don’t know Jessica … well, you’re about to know more about her than you know about anyone named Kardashian. 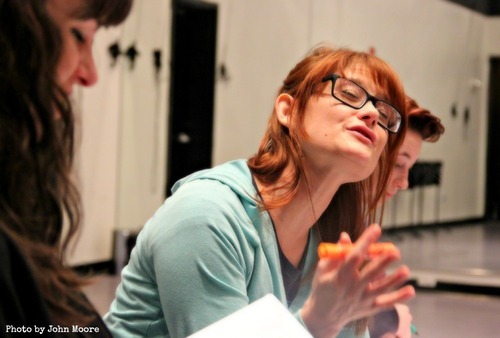 Jessica Austgen rehearses “One-Sided Fish,” a play written by teenager Laurain Park that was read at the Colorado New Play Summit in February.

John Moore: I once joined a Cult Following, and it didn’t go well for me. Please tell me your Cult Following doesn’t involve midnight conversions and sherpas.

Jessica Austgen: No, our Cult Following is a monthly comedy show that’s a completely unscripted, live B-movie. A team of six improvisers – Asa Erlendson, Sarah Kirwin, Brian McManus, Nanna Sachicko Thompson, Chris Woolf and myself – are assigned a movie genre, and we present a brand-new, totally made-up movie in that genre on show night, using audience suggestions to keep it fresh and improvised. But there is way more to it than that: We’ve got a bar and popcorn, decorated lobby and bathrooms, cool, free swag for showgoers, and lots of audience participation.

John Moore: Oh … that’s not the same thing at all. So at the last Cult Following, I heard you were singlehandedly responsible for drawing, like, 50 audience members to that sold-out house. What strange power do you hold over these people?

Jessica Austgen: A big group of them were high-school improvisers and their coaches – who are pretty much the coolest teachers ever for bringing their kids to our show. I do a lot of work with high-school improv teams, and it is really great to have them in the audience. They get to see some good, long-form improv happening on our stage. Then we have something in common when I see them at workshops or festivals during the year. I also required my Denver Center Theatre Academy Adult Improv Class to attend that night. So that is pretty much how I got so many people to the show: School field trip … and brute force.

John Moore: And how do the people of Denver benefit from your addiction to Jane Austgen? … I mean Austen?

Jessica Austgen: True fact: I adore Jane Austen. I love the pride, I love the prejudice, I love the headstrong protagonists, I love the handsome, taciturn romantic heroes in cravats. But, unfortunately, we don’t live in Regency-era England and dudes today don’t wear cravats, so… I did the only sensible thing: I created a Jane Austen improv team, Jane’s Addiction. (Not the band). It’s an all-female cast who long-form improvise a “novel” in the style of Jane Austen, covering all the archetypical characters you’d find in an Austen story.  I’d like to say I try to play intelligent, strong females, but I typically gravitate toward 18th century narcissistic, d-bag men – in cravats, of course.

John Moore: What do you think people might conclude about you if they were to scroll down your Facebook page at any given time?

Jessica Austgen: They would probably think I’m an irritating 15-year-old girl with an otter obsession.

John Moore: What’s better: Lord of the Rings … or Game of Thrones?

John Moore: In Lord of the Rings, What does the line, “Share the Load?” really mean to you?

Jessica Austgen: “Share the load” is hobbit-speak for, “I love you and want to have hobbit babies with you, Mr. Frodo.” 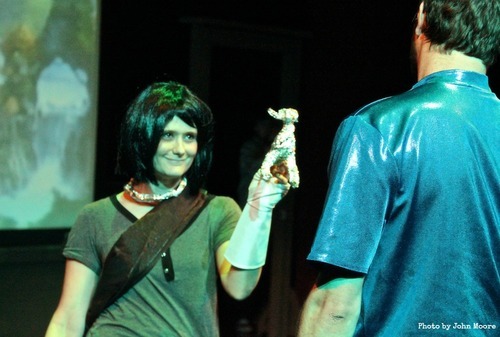 John Moore: DID! Past tense. I haven’t watched an episode in several weeks now. But back to you: Speaking as a fan of The Shield, what does the word “suuuuuuuuuuuuuuuuck” mean to you?

Jessica Austgen: It is a word used to describe the television show Seventh Heaven.

John Moore: Who wins in a battle between your fantasy lovers? Orlando Bloom or Benedict Cumberthumperbatch?

Jessica Austgen: This might be the toughest question I’ve ever been asked. After much consideration, I’m going to have to go with… Aaron Tveit. I mean, I love me some Bloom and Cumberbatch, but I’m really fickle and they’ve currently been replaced by Tveit, who played Enjolras in the Les Miserables film. I have a weird thing for singing, strident, flag-waving, soon-to-be-dead French boys. Also, have you seen how he rocks a cravat? Damn. However, Cumberbatch is hitting the stage in London this summer as Hamlet, so I could be swayed back into his camp, depending on his period neckwear. The ball’s in your court, Cumberbatch. Oh, and here’s a fun Cult Following fact: Cast member Brian McManus detests Benedict Cumberbatch. It really irritates him when people mention Cumberbatch or tell him that he looks like Cumberbatch. So, next time you see Brian, feel free to point out the resemblance. … Or tell Brian he looks like an otter.

Jessica Austgen: Kristen Bell is perfect, and nobody leans against a car and smolders like Jason Dohring. Also, it’s not a VM party until Logan punches someb—

Jessica Austgen: I always love a good “Ermahgerd!” I’m also super-into the memes where they mash-up Arrested Development quotes with other shows/movies, like Game of Thrones. 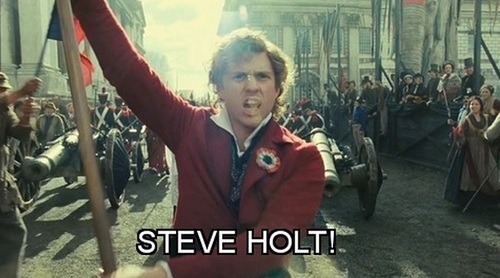 John Moore: Do you think they will ever fix the spelling of “Downtown Abbey”?

Jessica Austgen: Right? And why don’t they move it downtown? Why it is it in the country? I just wish that show wasn’t a liar.

John Moore: What can you tell us about April’s Cult Following? What shenanigans will you be up to?

Jessica Austgen: April’s Cult Following genre is Superhero movie! To prepare, I’ve been boning up on my Avengers, Spidey, Batman, Agents of SHIELD, Thor, Captain America, X-Men, Les Miserables. It’s legit: Wolverine is in it. I’ve also been peeking over the boyfriend’s shoulder when he reads Marvel comics in bed on his iPad. I think I’m pretty prepared for this month’s show. I don’t want to spoil anything, but you can probably count on: An origin story, amazing special-effect super powers (i.e. silly string), monologuing villains and maybe some upside-down kissing. Knowing Cult Following, though, that will probably be between Chris and Brian. Outside of the superhero genre, there will be the typical CF shenanigans: Chris Woolf will take his shirt off. (Why does Megan, our costumer, even GIVE him a shirt?). Sarah will break something. Brian will lick another cast member. Asa will do his Christopher Walken impression. Nanna will be adorable and make the audience want to hug her cute little face. And I will attempt to jam the phrase “Storm’s a-comin” into the show in some way, shape or form. The floor will get drenched, the plot will thicken, chaos will ensue and, by the curtain call, the Jones will look like a hurricane swept through. In short, it is going to be freaking awesome. Also, at the end of the night, we’ll find the drunkest audience member and ask him or her to chuck a dart at a board covered in balloons filled with suggestions to help us pick our genre for our season finale on May 8. I’m not sure what genres are in lay there, but I’ve got my fingers crossed for Shakespeare, Jane Austen, Fantasy or French Revolution Musical.

John Moore: Speaking of animated superheroes … What do you have against Darkwing Duck?

Jessica Austgen: DARKWING DUCK IS A STUPID SUPERHERO. Sigh. The whole Cult Following team took this Buzzfeed “Which Super Hero Are You?” quiz and everyone got a kick-ass hero and I got… Darkwing Duck. Ugh, that is a Disney children’s cartoon, not a real superhero. I’m way cooler than that. I should be, like, Deadpool or something. I want to be Deadpool.

John Moore: What are your other various jobs at the Denver Center, and how did you end up in Cult Following?

Jessica Austgen: I also teach in-house Academy classes: First Stages – for 3-5 year olds – Academy House Improv, Teen Company and summer camps. And I’m trying to build up the Denver teen improv community by hosting High School Improv days every quarter at the Newman Center. I’ve also been an actor in a couple of staged readings for the Denver Center Theatre Company: I was Appoggiatura at the Perry-Mansfield New Works Festival 2013 in Steamboat Springs, and then in Victory Jones and the Incredible One-Woman Band this past February at the Colorado New Play Summit. As far as Cult Following goes, though, I’m new to the cast this year. I auditioned for the first season and didn’t get the job. But they had an opening for a woman this season and I’ve improved a lot as an improviser these past two years, so Emily Tarquin and Charlie Miller offered me a place in the cast. I love it. I love it so much. I get to play pretend with some of my favorite people for an hour each month, and it is a beautiful thing.

Jessica Austgen: The crazy amount of tech support that we have. We’ve got lights, sound, video projections and costumes that are an enormous part of the show, and are also unscripted. Tech never knows exactly what we are going to do, and we don’t know what effects they are going to come up with. The tech team and the actors have this weird symbiotic relationship that adds up to an insane, messy, super-fun show. I don’t think there is anything like it in the country.

John Moore: Who is the ideal audience for Cult Following?

Jessica Austgen: We like fun people. I know we try to target younger audiences, but you don’t have to be a certain age to enjoy the show. As long as you are open-minded, enthusiastic and enjoy watching a bunch of improv nerds play fast and loose with film conventions, then you’ll probably have a good time. Also, do you like beer?

Jessica Austgen: Our show has beer!

John Moore: Why is it so important for companies like Off-Center to develop programming that appeals to younger people?

Jessica Austgen: Off-Center doesn’t just create programming for younger audience members; they create an experience for them. If you come to an Off-Center show, you are part of a community. The arts can’t be this “look and don’t touch” austere thing… we need people to feel like they belong, like they are an essential part of the evening. Off-Center does that: they invite you in to come and hang out with us while we make some cool art.