Lawrence Hecht, who taught hundreds of students over 18 years as the Denver Center’s Head of Acting, is back in Denver to play the patriarch in Curious Theatre’s upcoming staging of the Tony Kushner opus The Intelligent Homosexual’s Guide to Capitalism and Socialism with a Key to the Scriptures.

Hecht had a major role on the faculty of the Denver Center’s former National Theatre Conservatory master’s degree program. Of particular current pride to Hecht is the recent casting of NTC graduate Genesis Oliver in the Broadway revival of Kushner’s Angels in America. Oliver appeared in the same play for the NTC as a student in 2009.

As an actor, Hecht’s many DCPA Theatre Company credits have included A Skull in Connemara, The Pillowman, Glengarry Glen Ross and A Midsummer Night’s Dream. He also played Mark Rothko in Curious Theatre’s multiple award-winning Red. Hecht last performed in Colorado for the Colorado Shakespeare Festival in 2015, most notably as Doctor Faustus in Wittenberg.

Hecht left Denver in 2015 and moved to California with wife Ashlee Temple — a former DCPA Teaching Artist and local director — but their dream of settling on the coast of San Francisco coast ended about 80 miles short, in Stockton. That’s where Temple was hired to run the theatre department at San Joaquin Delta College while Hecht taught adjunct theatre classes at Stanford. That was a joyful task but it came at the soul-crushing cost of a two-hour drive along I-580. “And there is never a good day on the 580,” said Hecht, who now lives with Temple in Livermore, 35 miles closer to San Francisco.

In his current play with the lumbering title that the Curious cast has affectionately shortened to “IHo,” Hecht plays Gus, a retired Italian-American longshoreman and patriarch of a family that is having an unusual weekend reunion in a Brooklyn brownstone.

Hecht took some time this week to talk about his Colorado return, his mammoth present acting challenge and other random thoughts in this new feature we call: Having a Cup of Coffee with … (And in this case, the cup was poured at the Denver Diner.)

John Moore: How did this role come about?

Larry Hecht: All it took was a phone call. (Director) Chip Walton said: ‘I’ve got this play. It’s Kushner. There’s a role for you. Do you want to do it?’ It took me all of 30 seconds to say, ‘Sure.’

John Moore: Why was it such a slam dunk?

Larry Hecht: When you get the chance to do Kushner, there is every reason in the world to do it. I would do Kushner anywhere, anytime. Plus, it’s Curious. When Chip calls, I answer.

John Moore: After the death of Edward Albee, I surveyed a national panel of experts and, not surprisingly, it determined that Tony Kushner is the leading living voice among American playwrights. What is it about him?

Larry Hecht: He is an incredible wordsmith and a great poet. But I think it really is the daring and sheer audacity of his writing that sets him apart. He makes the issues and the world we live in accessible to people who would perhaps otherwise be put off by the topics he writes about.

From 2015: DCPA says farewell to Larry Hecht after 18 years

John Moore: Such as homosexuality and AIDS and communism?

Larry Hecht: Yes. But he writes in a way that generates incredible passion for the people watching his plays on both sides of an issue. We’ve talked about this in rehearsal: You may have different views, but you don’t have different passion. He comes from a place that is pure in soul, heart and mind. He writes good, brainy stuff. And he doesn’t treat you as if you couldn’t possibly understand. You can.

John Moore: Angels in America is essentially two separate, three-hour plays. IHo comes in at 3 hours and 45 minutes. Tell me about the epic nature of Kushner’s storytelling, especially at a time when most American playwrights are being told to write no longer than 90 minutes without an intermission.

Larry Hecht: Kushner knows that certain stories can’t be told in just 90 minutes. This is the story of an Italian-American family over the course of two days, and that story is bigger than a sound bite. Yes, he could touch on his main points in a 90-minute play, but that’s not what it’s about for Kushner. For him, it’s about settling into this world that the audience gets to inhabit for 3 or 4 hours —  if they have the guts and the determination to come along with us.

John Moore: Curious will appreciate your use of the word “guts.”

Larry Hecht: Yes, that’s their company slogan: “No guts, no story.” Well … there you go.

John Moore: I feel like this is a play that speaks to a different kind of theatregoer right now. Not the kind that demands a quick, drive-through kind of approach to live theatre. This is a play for audiences who are missing, seeking and demanding more substance.

John Moore: But that requires a different kind of mindset going into a play like IHo. What would you say to audiences who are on the fence about coming to Curious and really settling in for an entire night?

Larry Hecht: I would just remind them that people are lining up by the thousands every night to see an almost-three-hour musical <!– called Hamilton –> that has changed the landscape of the American theatre itself. <!–

I saw it in New York, and it was everything you dream of. It was absolutely possibly the most thrilling night I have ever had in the theatre. –> So … time is kind of a relative thing.

John Moore: Speaking of time: The Broadway revival of Angels in America is about to open next week, 37 years after it was first performed. That play was such a statement about where we were as a country in 1991. But why should it matter to us now?

Larry Hecht: When something is so deadly specific to a time and place as Angels in America, it becomes universal. The writing is so incredible. Those relationships. Those characters are so fully drawn that they have become part of the diorama of America. It has so much life beyond just the play itself. And to now see this uniquely American story as presented by the National Theatre of Britain should be really interesting.

John Moore: I’m of the belief that tumultuous times demand a ferocious cultural response. But that didn’t happen after 9/11. The attack produced a generation of plays that were certainly informed by the terrorism, but that moment didn’t necessarily produce a run of great plays. But when you look back at the 1980s — specifically the AIDS crisis and the government’s lackadaisical response to it —  that inspired angry, intelligent, monumental plays like Angels in America and The Normal Heart and many others. Maybe that’s why they are bringing Angels in America back now: It’s time for theatre to get angry again.

Larry Hecht: It is. And Angels is still a potent force in theatre. I mean, if you were going to name your top-five plays ever written, Angels is certainly going to be at or near the top.

John Moore: So let’s talk more specifically about IHo. It will be new to this audience. What do we need to know?

John Moore: You mention the nod to Miller and O’Neill but the title is actually a riff on George Bernard Shaw‘s 1928 nonfiction book called The Intelligent Woman’s Guide to Socialism and Capitalism and Mary Baker Eddy’s Science and Health with Key to the Scriptures, which delved into Marxism and socialist thought. How is this play informed by Shaw?

Larry Hecht: I would say it’s the wit and wisdom of the words. But also the ideas are similar.

John Moore: So set us up. What happens in this play?

Larry Hecht: It’s a fun-filled two days with a scattered Italian-American family going through a crisis situation having to do with the patriarch. And that crisis brings everybody’s divergent ideologies to the fore.

John Moore: OK, now what would you say the play is about?

Larry Hecht: I think it’s Kushner’s look at a past that is not spoken of much anymore. It’s a past that involves unions and revolution and the possibility of a violent change that is both necessary and inevitable. The idea of revolution has gone away in this country. Kushner’s play speaks to the danger of complacency in America and in the world. So it’s really a play about revolution.

John Moore: Why is this a relevant topic of conversation in 2018?

Larry Hecht: Kushner is a political beast. His voice speaks about what is happening in the here and now, even in the things he wrote 10 years ago. But for all the issues he raises, this play is really about the necessity of family. Our families have started drifting away from each other, and this play is a call for families to come back together. That’s the only way the revolution ever happens.

John Moore: And what is your role in all of this?

Larry Hecht: I play Gus, the patriarch. Gus is an old-time communist, union guy. He worked on the waterfront as an organizer. His mission in life was revolution. And now, at a more advanced age, other issues are coming into play.

John Moore: How does this work compare in style and structure to, say, Angels in America?

Larry Hecht: For me, this is Angels in America: Middle Age. Angels was about young people. This is the middle-age version of that.

John Moore: What questions do you want audiences to wrestle with after they see the play?

Larry Hecht: I would want them to ask themselves, ‘What are the things that we have become complacent with, both in our society and in our families?’ Are you really with your family? This play calls that into question.


The Intelligent Homosexual’s Guide to Capitalism and Socialism with a Key to the Scriptures: Ticket information 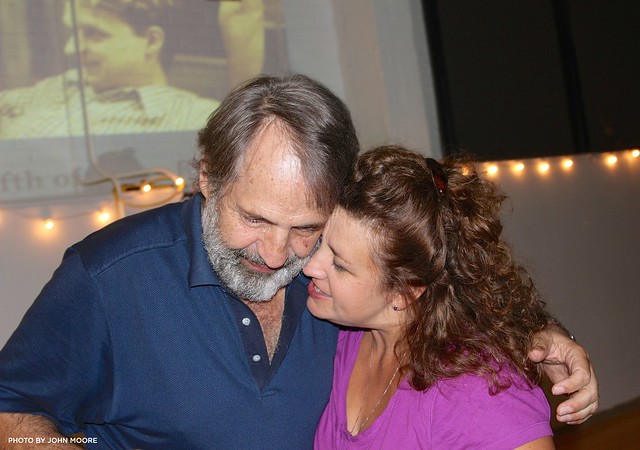 Photos from the Denver Center’s 2015 celebration of Lawrence Hecht’s 18 years as Head of Acting. To see more, click on the image above to be taken to our full gallery of photos. Photos by John Moore for the DCPA NewsCenter.