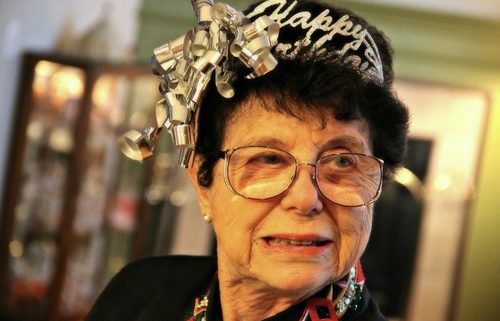 Among her many other accomplishments, Sylvie Drake translated two plays — one from French and another from Italian — into Denver Center Theatre Company productions. Photo by John Moore.

By John Moore and Suzanne Yoe

To adequately describe Sylvie Drake’s career would mean to risk the depraved incursion of the run-on sentence, which the editor in her would never abide. But, damn the torpedoes:

Drake is an accomplished playwright, theatre critic, editor, interviewer, poet, wine connoisseur and even cartoonist. She is, as Denver Center Theatre Company Producing Artistic Director Kent Thompson more succinctly puts it, “simply the most knowledgeable person of the theatre I have ever known.”

And she’s an old, joke-telling Jew. “This old man goes to see his Rabbi and says to him, ‘Rabbi! I know my wife is poisoning me! I need your advice. What should I do?’ And the Rabbi says to the man, ‘Calm down. Give me a chance to talk to her. I’ll get back to you.’ So about three days later, the Rabbi calls the man and says to him, ‘I had a long talk with your wife. Three hours we talked!’ And the man says, ‘Yes, yes! So what’s your advice?’ ‘Take the poison!” (Rim shot.)

Drake, who was born in Egypt and considers Marion Ross ofHappy Days her closest friend, saw John Gielgud play Hamlet when she was 15 years old. She has interviewed many of the greatest theatre artists of our time. She has Edward Albee on speed dial. She was Eugene Ionesco’s personal interpreter. She served on the drama panel for the Pulitzer Prize.

And, oddly enough, she wrote a 1966 episode of TV’s Flipper.

Drake has been one of the nation’s most respected theatre critics since 1971. She is so widely regarded for her endless reservoir of theatre knowledge and her endless reservoir of industry contacts. Once, when former Denver Center Deputy Director of Media Relations Teri Downard was having problems getting the publicist of a Sound of Musictouring production to return her calls, Drake suggested, “Why don’t you just call the Von Trapps at home? Here’s the number. They live down the hill from me in Vermont.”

For the past 20 years, Drake’s head-spinning, globe-spanning career has had her working as Director of Publications (among other titles) for the Denver Center for the Performing Arts. Now, that career has called her home to Los Angeles, where she has split time with Denver for two decades.

Just don’t call her “retired.” At age 84, Drake already is making inroads in the Los Angeles critical community as a contributor for CulturalWeekly.Com. Collin Mitchell, who aggregates Los Angeles theatre media coverage for the popular Bitter Lemonswebsite, has twice singled out Drake’s recent theatre reviews as the Los Angeles media’s best “critique of the week.”

But for all her intellect, the undersized woman with the oversized glasses is most respected for her unbounded enthusiasm for the craft. She once described theatre at its best as “a gigantic jolt to my emotions.”

“Theatre is life — incarnate, alive, on stage,” Drake once wrote. “It takes all of the other arts combined to create it, and when the stars align and the results are powerful, theatre holds that fabled mirror up to nature like nothing else.”

Drake grew up in Alexandria, Egypt, and earned her masters degree in acting and directing from the Pasadena Playhouse in 1952. That’s where she met and performed with TV’s Marion Ross. Drake worked as an actor and director in Los Angeles and New York before turning to writing episodic television. In 1969, Drake became theatre critic for the Canyon Crier, a Los Angeles weekly. She joined the staff of The Los Angeles Times in 1971 and served as Chief Theatre Critic there through 1993. She was president of the Los Angeles Drama Critics Circle and on the Executive Committee of the American Theatre Critics Association.

She came to the Denver Center in 1994 with an impressive resume and  title. But former Denver Center Theatre Company Artistic Director Donovan Marley already knew Drake long before he knew her.

“First, I read her,” said Marley, who before Denver had served as Artistic Director of the Pacific Conservatory of the Performing Arts in Santa Maria, Calif. “So, knowing Sylvie Drake’s response to each production she reviewed for The Los Angeles Times was a job requirement.

“In doing my due diligence, I learned she was witty, smart, passionate about the art form, and — unlike most of her colleagues around the country – she knew the theatre from backstage as well as out front.

Marley admired Drake’s deep respect for talent and her openness to new ideas. “I was often astonished at the aggressiveness of her intolerance of the shoddy, the derivative, and the pretentious,” said Marley. But when he learned that Drake was taking her first trip to Santa Maria to review three PCPA productions, Marley admitted, “ I was flattered … and terrified.”

It was clear to Marley “and to all of us who were producing on the West Coast,” he said, “that she did not suffer fools. At all.”

When Marley later came to Denver and instituted a massive 12-play season and an equally massive new-play program, he knew he needed to bring in a bold, organized and disciplined leader with national prestige to help him. He wanted Drake.

But rather than call her in Los Angeles and likely get a “no” from her on the phone, Marley instead hopped on a plane … and all but stalked her. He knew Drake would not entirely walk away from her status as one of the nation’s leading theatre critics.

“So I pitched the idea of a six-month sabbatical,” he said. “I assured her that I was not trying to get her to leave The Los Angeles Times. Instead, I urged her to come to Denver, create the new-play program for the Denver Center Theatre Company and then return to her desk and byline in Los Angeles.

“I baited the hook with her own restless curiosity,” he added.

Drake named the new-play program in Denver Prima Facie – Latin for “at first sight.” She organized a massive reading process and began letting the international theatre community know they needed to be in Denver every spring.

“The energy she created around the new-play festival spilled into the rehearsal halls and shops of our production facility and onto the stages where we performed nightly,” Marley said.

Drake did return to her job at the Los Angeles Times. But some years later, after the paper was sold, Denver Post publisher – and Denver Center founder – Donald Seawell recruited Drake to supervise publications for the Denver Center.

In her free time, Drake translated A Servant of Two Masters from Carlo Goldoni’s Italian and The Madwoman of Chaillot from Jean Giraudoux’s French, both of which were later staged by the Denver Center Theatre Company.

“She is a walking English-French-Italian dictionary, with a smattering of Hebrew and Arabic thrown in,” Downard said.

She arrived in Denver with an impressive – and daunting – resume. Kirk Petersen, Associate Director of Ticket Services, admitted, “When I first started working with Sylvie, I was a bit intimidated.” And he was not alone. But Drake immediately dispelled Petersen’s trepidation, he said, “with her welcoming approach and wry humor.”

Anthony Powell, who will direct Lord of the Flies for the Denver Center Theatre Company this fall, felt similarly out of his league at first. “As an actor-turned-director,” he said, “I’ve always felt a little bit like I should have gone to Yale or something.” But he was comforted, he said, by Drake’s “quiet encouragement, her droll sense of humor — and that little twinkle of the eye that flashes whenever she has said something slightly wicked.”

Drake edited more than 400 issues of Applause Magazine. In that capacity, retiring Director of Development Dorothy Denny said Drake deserves her own round of applause “for adding a touch of class to what could have been just a playbill.”

And yet, for all her profound wordsmithing, Drake could sometimes make her point with remarkable abruptness. Her critique of the profane musical sensation The Book of Mormon? “I loved it … Damn it!”

Drake has come to be known as a mentor to anyone who has walked the Denver Center halls. “Sylvie taught me to be honest and direct, that work is better when it’s fun, and what handling yourself with true dignity and grace is,” said Suzanne Yoe, Denver Center Director of Creative Services.

In summarizing Drake’s impact at the Denver Center, Chairman and C.E.O. Daniel L. Ritchie invoked Abraham Lincoln, who once said, “He has a right to criticize, who has a heart to help.” Lincoln could have been talking about Sylvie Drake, Ritchie added: “She criticized, illuminated, argued and pushed the Denver Center to greater heights.”

Former Denver Center Attractions public-relations manager Genevieve Holt said when Drake believes in you, “no one can bring you down. Denver Center audiences have been better enlightened thanks to her tireless work.”

Local filmmaker Steve Delano has often found conferring with Drake to be reassuring, “like talking to one’s tribal chief, or a good mechanic, an old friend,” he said. “Sylvie listens to you, and everything she says just sounds cooler. Quiet, considered, comforting, smart.”

Drake caught the theater bug while a student at The Pasadena Playhouse, “and once it enters the blood, there is no way to purge it,” Marley said. That said, theatre has not been the great love of her life. That distinction went to her late husband, Ty Jurras, who died in 2011 at age 95. He was a former wine industry publicist who later operated a well-regarded Vermont bed and breakfast. They married in 1973.

Drake was previously married to late TV actor Ken Drake, with whom she has two children: Robert Drake, Director of Production for the Old Globe Theater in San Diego; and Jessica Drake, a speech and dialect coach working in feature films and television.

As Sylvie Drake was preparing to leave Denver last month, she had one last bit of mentoring to offer the co-workers before she left.

“Travel on,” she told them. “Be happy, and share the wealth.”

NOTE: Much of the interviewing for this report was compiled by Suzanne Yoe.