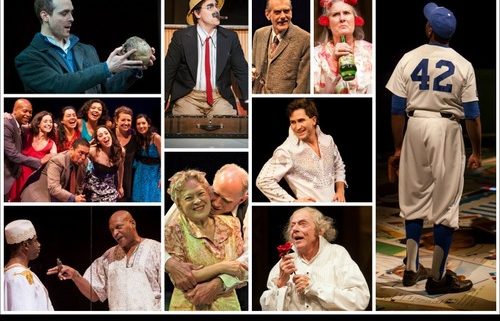 This video gives you some of the sights and sounds from the year’s 2014 Colorado Theatre Guild Henry Awards ceremony on July 20, at the Arvada Center. Video by John Moore and Brian Landis Folkins.
.

Curious Theatre Company’s staging of the remarkable Civil War drama The Whipping Man swept the Colorado Theatre Guild’s Henry Awards on Monday, while the Denver Center Theatre Company was honored for Outstanding Season for the fourth time in the past seven years. “The Whipping Man is an incredibly rich, complex, and surprising play, and this production was an exciting opportunity for Curious to illuminate an important chapter in American history while also exploring a fascinating intersection of religions and cultures,” Walton said. “It is precisely the kind of provocative and adventurous play that Denver audiences have come to expect from Curious Theatre Company.”

The Whipping Man was written by Matthew Lopez, who also penned the Denver Center Theatre Company’s world-premiere comedy, The Legend of Georgia McBride, which was named Outstanding New Play. It is the story of an Elvis impersonator who must conquer his fears and preconceptions by entering the vulnerable world of drag performance. It also won the Henry for Costuming (Dane Laffrey). The Whipping Man, set in the immediate aftermath of emancipation, focuses on an injured Jewish Confederate landowner who finds himself in desperate need of medical help from two of his family’s former slaves.

The Guild’s Lifetime Achievement Award went to Billie McBride, whose seminal acting performances have spanned cancer patient Vivian Bearing in “Wit” to an illiterate old crank in “Grace and Glorie.” Her directing credits include everything from the Arvada Center’s “The House of Blue Leaves” to children’s theater. McBride, a veteran of three soaps, appeared on Broadway in Safe Sex in 1987, and was Production Supervisor for Torch Song Trilogy, starring Harvey Fierstein.

“I use her as an example to a lot of actors, actually, of somebody who did the right thing,” Fierstein said of McBride. “She saw what her career and life would be in New York, which would be not getting to do enough of what gives her great joy. And so she went off to Denver, where she has been unbelievably busy ever since.  She acts, she directs, she does everything, and she has a very full life doing it.”

In all, eight Colorado theatre companies and 11 productions won at least one Henry Award on Monday. The Aurora Fox won four, two each for Painted Bread (including Outstanding Actress Karen Slack, reprising her role as Frida Kahlo), and two for Metamorphoses, the retelling of Greek and Roman myths in an actual pool of water.

The host Arvada Center won three awards, including Tari Kelly for Outstanding Actress in a Musical (End of the Rainbow) for her portrayal of Judy Garland in her final, drug-crazed days. Emma Messenger, above, in The Edge’s “The Beauty Queen of Leenane.” Photo by Rachel D Graham.

It was a breakthrough year for Emma Messenger, who played Big Mamma in The Edge’s Cat on a Hot Tin Roof and won a True West Award for her comic performance in Illumination Theatre’s Sordid Lives. On Monday, she was named Outstanding Actress in a Play for her portrayal of a cripplingly cruel Irish mum in The Edge’s The Beauty Queen of Leenane.

The evening included performances from Phamaly Theatre’s “Fiddler on the Roof,” Breckenridge Backstage Theatre’s “I Love You, You’re Perfect, Now Change” and Midtown Arts Center of Fort Collins’ “Les Miserables” (including an assist from the Arvada Center’s Javert, Stephen Day), along with a song from the Bobby G Awards’ Outstanding Musical, “Joseph…” by Cherry Creek High School.

For the second year, the Colorado Theatre Guild split its technical awards into two categories: Those of larger and smaller scale budgets. Shannon McKinney swept the lighting awards – for Curious’ The Whipping Man (larger scale) and the Aurora Fox’s Painted Bread (smaller scale).

Henry Award judges attend shows and complete a scorecard evaluating every facet of a production according to a point scale of 1 to 50. Ballots completed by judges who are considered professional critics automatically count. A team of about 40 “citizen judges” make up the difference. A total of six ballots are counted toward each show’s scores. Any over that total are discarded.

That system will change slightly for next year with the June 1 start of a new judging period. Going forward, there will no distinction between professional and citizen judges. If more than six scorecards are received, the six that make up each show’s actual total will be chosen at random.

The nominees and winner of Outstanding Season, the Henrys’ signature award, are not determined by judges but rather by the discretion of Colorado Theatre Guild staff. Director and actor Billie McBride, shown in Miners Alley Playhouse’s “Grace and Glorie” with  Kendra Crain, will be given the Colorado Theatre Guild’s Lifetime Achievement Award at tonight’s Henry Awards at the Arvada Center. Photo by Sarah Roshan/Trulife Photography