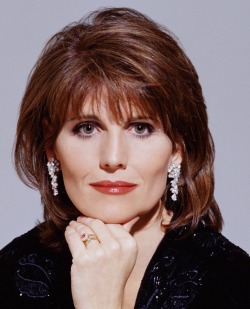 Casting for the upcoming Denver launch of the nationally touring production of Pippin has been completed with the addition of Lucie Arnaz in the role of the title character’s trapeze-flying grandmother, Berthe, it was announced today.

Rehearsals begin today for the U.S. national tour that launches Sept. 6 and runs through Sept. 20 at the Buell Theatre.

Arnaz is the daughter of beloved actors Lucille Ball and Desi Arnaz, and the sister of actor Desi Arnaz, Jr. Her Broadway credits include originating the role of Sonia Walsk in Marvin Hamlisch’s They’re Playing Our Song, as well as Lost in Yonkers (Bella) and Dirty Rotten Scoundrels (Muriel).

She rose to fame as a teenager in the series TV series Here’s Lucy from 1968 to 1974. She played Kim Carter, the daughter of her real-life mother.  She has performed in concerts, TV and film ever since. Arnaz appeared to great acclaim in The Witches of Eastwick on London’s West End, and in concerts at The White House, in Las Vegas, and at the famed Birdland jazz club and Feinstein’s at The Regency in New York.  Arnaz and her husband/actor Laurence Luckinbill produced the Emmy Award-winning documentary “Lucy & Desi: A Home Movie,” which has aired on NBC, A&E, and Nickelodeon.  In 2001, Arnaz partnered with her brother, Desi Jr., to produce the “I Love Lucy 50th Anniversary Special,” which also received an Emmy nod.

In Pippin, Arnaz will assume the role created by Irene Ryan shortly before her death in the original Broadway musical and recreated for the 2013 Broadway revival by the Tony Award-winning Andrea Martin. The exiled Berthe tells Pippin not to be so serious and to live a little (“No Time At All”).

Previously announced cast members include Sasha Allen (a finalist on the fourth season on NBC’s The Voice) as Leading Player, Kyle Selig (The Book of Mormon on tour) as Pippin, and Tony Award winner John Rubinstein as Charles. He created the title in the 1972 original Broadway production. Now, he’s playing Pippin’ father. Click here for the full casting announcement.

Pippin received four 2013 Tony Awards, including Best Revival of a Musical and Best Direction of a Musical (Paulus).

Pippin plays in Denver from Sept. 6-20, 2014. Tickets are on sale now at 303-893-4100. Online sales are currently suspended in preparation  for a re-launch of the Denver Center web site at www.denvercenter.org. Online ticket sales will resume Wednesday, July 30.

Heidi Bosk contributed to this report.