The Buell Theatre was built, in large part, to host the national touring production of The Phantom of the Opera in 1991. And after that grand party, cynics and critics alike predicted it would surely stand empty. Instead, a quarter-century later, it ranks as the nation’s highest-grossing theatre under 3,000 seats.

Plans already were underway to convert the dilapidated old basketball arena into “The Buell” in 1990 when the late, legendary Denver theatre producer Robert Garner got the call from British producers Alan Wasser and Sir Cameron Mackintosh.

“They said we could have the first national touring production of The Phantom of the Opera — if Denver had a theater that could hold it,” Garner said in a 2011 interview.

That would mean massive upgrades to the Buell’s planned backstage area, in effect forcing the city to commit to building a major, state-of-the-art Broadway roadhouse. At a cost of $40 million.

“And right up to the end, we were not sure it was going to be ready to open on time,” Garner said. “But contracts were signed, and we were on the hook no matter what.”

The 10-week Phantom run christened the 2,830-seat Buell and drew 224,393, generating $11 million in ticket sales and making an estimated $44 million economic impact. It was later determined that 21 percent of the audience came to Colorado to see the show from 43 states. In a letter to the Rocky Mountain News, Denver resident Dick Moore claimed to have seen the show 25 times during the run. The top ticket price was $60.

It was, Denver Post critic Jeff Bradley wrote at the time, “the most successful theatrical event in Denver history.”

Since then the Buell, named after Denver architect and philanthropist Temple Hoyne Buell, has served more than 13 million patrons. It launched notable touring productions of Sunset Boulevard, The Lion King and The Book of Mormon. It has hosted comedians like Jerry Seinfeld; speakers such as Madeleine Albright, Laura Bush and Queen Noor of Jordan; and hip musicians including Nick Cave and Ray LaMontagne. The Buell has hosted innumerable graduations, funerals — and even a recent original stage comedy written by Tyler Perry.


But the Buell is primarily home to Broadway musicals such as Andrew Lloyd Webber’s The Phantom of the Opera, which returns this summer in an updated production with new scenery, lighting, staging and choreography. This engagement will be the show’s seventh visit to the Buell. (Pictured right: Storm Lineberger as Raoul in the new ‘Phantom of the Opera’ visiting Denver. Photo by Matthew Murphy.)

Over  25 years, dozens of future Broadway stars from Annaleigh Ashford to Andy Kelso to Sierra Boggess (who has played Christine Daaé in both The Phantom of the Opera and Webber’s 2010 sequel, Love Never Dies) decided they wanted to be actors while absorbing musicals on the Buell stage.

Photos: 25 years of The Buell Theatre … and before: 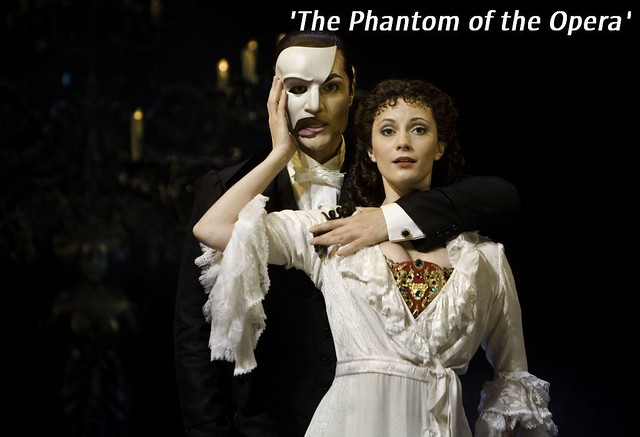 To see more photos, click the forward arrow on the image above.

Few would know now that the Buell spent much of its previous life as the rowdy, rickety and raucous Denver Municipal Auditorium Arena, the city’s home for concerts, basketball, tennis, volleyball and professional wrestling. Garner used the arena to promote concerts by Johnny Cash, Merle Haggard, Joni Mitchell, David Cassidy and Neil Diamond. “But professional wrestling was king,” he said. “There were matches there every two weeks.”

The Auditorium Theatre, with its deco-inspired rounded corner at 13th and Champa streets, was originally built to host the 1908 Democratic National Convention. The space was divided in 1953. The 6,841-seat basketball arena made up the southwestern half of the building, while the other half housed the more culturally sophisticated Auditorium Theatre — now the Ellie Caulkins Opera House.

Long before the Phantom brings down the chandelier in the Buell, spirits roamed the air above the Auditorium Arena. In 1975, the official mascot of the Indiana Pacers basketball team put a hex on the Denver Nuggets before their championship series. Team management countered by hiring a witch to remove the spell in a grand ceremony before the deciding game. (Nevertheless, sadly, the Nuggets lost.)

On Dec. 26, 1968, Led Zeppelin played its first U.S. concert at the Auditorium Arena. That same year, Eric Clapton played there with his band Cream. The opening act? A hypnotist!

But the Auditorium Arena was largely idle after the basketball team bolted for the fancy new McNichols Sports Arena in 1975. Fifteen years later, the fortuitous call came from Mackintosh that both accelerated and expanded the plan to turn the Buell into what remains one of the most successful Broadway touring facilities in the country.

But by 2008, the Buell had grown pale in the shadow of the sparkling new Ellie Caulkins Opera House next door. So, in preparation for another Democratic National Convention, the Buell underwent a $1.2 million upgrade that included new cherry-stained wooden seats with stadium-style cupholders and deep-red plush upholstery.

One rarely seen signature of the Buell is the backstage “Actors’ Alley,” which connects the theater to dressing rooms and other facilities in the complex. Since 1991, a door-sized painting of each touring show’s poster or playbill has lined backstage hallways, signed by performers including Julie Andrews, David Copperfield, Tommy Tune, Chita Rivera, Julie Taymor, Savion Glover and even former President Bill Clinton.

John Moore is the DCPA’s Senior Arts Journalist. He compiled some of this report for a story he originally wrote for The Denver Post in 2011.

The Buell Theatre: A timeline

1991: The city transforms the Auditorium Arena into a 2,830-seat, state-of-the-art Broadway roadhouse.

2002: Disney Theatricals chooses Denver to launch the national tour of The Lion King. More than 1,800 fans stand in line for tickets, and in all, 220,000 attend the 10-week run that infuses an estimated $58 million into Denver’s economy.

2004: North High School becomes the first (and only) high school to stage a production at the Buell, The Zoot Suit Riots, drawing 2,100.

2008: The Buell undergoes a $1.2 million upgrade in preparation for the Democratic National Convention.


Based on the classic novel Le Fantôme de L’Opéra by Gaston Leroux, The Phantom of the Opera tells the story of a masked figure who lurks beneath the catacombs of the Paris Opera House, exercising a reign of terror over all who inhabit it.  He falls madly in love with an innocent young soprano, Christine, and devotes himself to creating a new star by nurturing her extraordinary talents and by employing all of the devious methods at his command.
• Aug. 25-Sept. 11
• Buell Theatre
• ASL interpreted, Audio-described and Open Captioned performance: 2 p.m. Sept. 11
• Tickets: 303-893-4100 or Tickets: 303-893-4100 or BUY ONLINE
• Groups: Call 303-446-4829

Photo gallery: The Phantom of the Opera

‘The Phantom of the Opera’ photos by Matthew Murphy and Alastair Muir. To see more, click the forward arrow above.