Jeff Carey trying out a developing script at a 2016 gathering of the Rough Draught Playwrights. Photo by John Moore.

Whenever Denver artist and playwright Jeff Carey faced death – and he faced death more regularly than anyone ever should have to – he turned to his art as what he called “a yowl of defiant resistance in the face of disaster.” His art included playwriting, painting, scenic design, dramaturgy, animation, poster art, directing and acting. He leaves behind hundreds of ghoulish paintings that earned this otherwise most genial of men the affectionate nickname of “Scary Carey.” Carey loved that moniker so much, that’s what he titled his 2005 retrospective at the historic D&F tower in Downtown Denver. Although Carey more accurately described himself on Facebook as “a visionary artist, writer, cancer survivor, bipolar, Eagle Scout, stud muffin and uncle.”

Carey beat kidney cancer and waged an unending heavyweight fight with depression. But his body had little fight left when he was diagnosed in October with a quickly deteriorating neurodegenerative disease, followed by advanced ALS (or Lou Gehrig’s Disease). Even with his disease in an advanced state, Carey attended the DCPA Theatre Company’s recent Colorado New Play Summit in February. He died Friday afternoon (March 29) at age 56.

The demons of Carey’s vivid imagination were very real to him, but he battled them with uncommon empathy and a heart that was open to everyone. Carey, who painted nearly every day of his adult life, spent a lifetime making loveliness out of darkness. And through his art, Stories on Stage Artistic Director Anthony Powell said today, “His wounds became flowers.” Carey wrote The Kidney Plays in 2014 after doctors found a mass on one kidney and removed it. Carey said writing his series of one-act kidney plays helped ease the anxiety of what was happening to his body. “A life-or-death situation brings focus quickly,” Carey said. “I came up with the plays, one after another, the way you keep adding layers when dressing for a cold day.”

One of the kidney plays was called Dear Tumor, which Carey described as his own love affair with his tumor. “Jeff translated this tumor into the woman of the dreams,” said Carey’s friend, former Creede Repertory Theatre Artistic Director Maurice LaMee. “In Jeff’s mind, his ideal woman is something that might kill him, so he has to let her go in order to survive.”

He was, LaMee said, “a fantastical creative unicorn.”

T. Jefferson Carey was born July 2, 1962, and grew up in East Denver taking informal theatre classes in the basement of legendary Denver director Bev Newcomb Madden’s home. Carey and other neighborhood kids would gather in the Newcomb basement and present plays such as The King’s Creampuffs. It was a mostly happy childhood for Jeff and his three siblings, but one overshadowed by a family tragedy that would later consume both his playwriting and visual art.

Carey would be the first to admit he didn’t see the world quite the same way other kids did. Take the original, unsanitized version of Cinderella, where one stepsister is willing to have her toes lopped off so her foot will fit into the Prince’s glass slipper. “The prince says, ‘What is this trail of blood?’ ” Carey once said with delight. “It was the blood that gave her away!”

Carey graduated from Manual High School in 1980, New York University in 1983 and the Denver Center’s National Theatre Conservatory master’s program in 1986. He studied playwriting from Romulus Linney and David Mamet and later taught playwriting at Arapahoe Community College and as a DCPA Teaching Artist. He was a member of the DCPA Theatre Company’s original Playwright’s Unit and assisted Powell on the direction of the company’s 2007 production of The Pillowman, a gruesome play that suited Carey’s ghoulish artistic style perfectly.

Carey and Powell remained friends, and Powell was surprised a few years ago to learn that Carey had temporarily moved himself into a transitional community in Congress Park for people recovering from severe and persistent mental illness. “He called me up and said, ‘I have written a show for the people in my building; will you come see it?’ ” Powell said. “It was the retelling of a fairytale with panache and a wonderful sense of humor that was tailored for this group of people who were grappling with some really serious stuff. But with his big heart and innate sweetness, Jeff convinced them that this would be a good thing, and it turned out to be one of the most moving and satisfying theatrical experiences I have ever had.”

LaMee said Carey understood depression in others because he suffered through it himself, “and yet that never turned into resentment or anger,” he said. “If anything, it opened him up to other people’s suffering.” Carey moved to New York in 1990 and was invited to join a playwriting group that included a couple of up-and-comers named Aaron Sorkin (“The West Wing”), Peter Hedges (“About a Boy”) and Doug Wright (I Am My Own Wife). It was then he was struck by the memory of his father telling him bedtime stories, which led to his greatest accomplishment as a playwright.

Pan & Boone is a moody memory play about two whimsical brothers who adopt the playful personae of the mythical Peter Pan and the very real Daniel Boone. It is a play rooted in the suicide of Carey’s own grandfather 35 years before, which at the time sent a sensitive 6-year-old Carey, his brother Marc and their father on an aggrieved journey to a Neverland far darker than Peter Pan ever knew. “Growing up is not something I have fallen into seamlessly,” Carey said.

Pan & Boone is a play with one foot in a sandbox and the other in a Pandora’s box. “It’s really about two boys who go on an epic journey to solve real-life problems within the world of dreams and a shared imagination,” Carey said at the time.

Pan & Boone was first staged by a Chicago company called Running with Scissors and then brought to Colorado by the DCPA Theatre Company’s Jamie Horton, who directed the story both at the Creede Repertory Theatre and Denver’s Curious Theatre in 2003.

What rang through loudest to Horton, he said, “is the power of getting to the truth in one’s family, and the power of uncovering hurt and moving on. What I absolutely love about the play is it does so in the form of this very devoted father telling his stories to his boys.”

LaMee, now Head of Theatre Arts at Colorado Mesa University, says the climactic scene of Pan & Boone “has to be one of the great theatrical images I can recall.” It shows a conflicted Pan trying to decide whether to end his life by taking one simple step forward and swinging out over space against a beautiful mountain background and a starlit sky. “The final few seconds of the play are nearly miraculous. Here is this boy at the crossroads between adolescence and adulthood, past and present, fact and fiction, and life and death … all at once. The decision he faces determines whether this entire affair has been a journey into a tragedy or redemption. Only a playwright in full command of his vision could arrive at a climactic moment that is so intelligent, sad and frighteningly consequential. Strictly from a theatergoing perspective, what happens last is one of the tiniest but most exhilarating moments you may ever experience in a theater. You could knock me over with the feather in Peter Pan’s hat.”

Carey’s plays have since been staged in London, New York, Chicago, Vermont and New Mexico, but his primary artistic homes were at the Denver Center and Creede Repertory Theatre, located 250 miles south of Denver in Mineral County.

Carey had an especially gifted touch writing for children. He wrote six complex musicals for young audiences with writing partner Jessica Jackson, now Creede Rep’s Artistic Director. “Jeff was never afraid to confront very serious topics with kids like the death of a parent or global warming,” Jackson said. “It was like he had this direct path to childhood in his brain.”

Jackson’s favorite was the deliciously titled Grimm Pajamas. “There is a darkly beautiful moment when the Brothers Grimm are ages 10 and 11, and suddenly they just stop their mayhem and their fighting and have this moment where they realize for the first time that their mother is gone, and they don’t have anyone to tell them stories anymore. And that now the burden is on them: They are the storytellers now.” Jeff Carey with his sister, nieces and nephews.

As an actor, Carey appeared in more than 60 productions around the country. His artwork has appeared in Aspen Magazine, Haunted Attractions Magazine, Giggle & Weep and the Chicago Tribune. He titled his artistic portfolio “The Haunted Art of T. Jefferson Carey.” It is populated with hundreds of frightening and distressed characters. But look closer, LaMee says, and you will see that “so many of his zombie characters display an almost whimsical kind of childlike wonder – even in their varying states of falling apart. That’s Jeff.”

Carey was preceded in death by his mother, Betsy. He is survived by his father, Jack Carey, brother Marc and sisters Julie Carey and Ann Carey Sabbah.

“My brother is a brilliant flame of pure creative energy, dimmed only intermittently by his courageous struggles,” said Sabbah. “The gifts he gave us are boundless and the world was ever so much more interesting through his eyes. As another friend put it, he was the type of person who leaves beauty in his wake.”

The family is planning “A Celebration of Life in Three Acts” for 4 p.m. Saturday, April 20, at the First Unitarian Society of Denver, 1400 Lafayette St.

An excerpt from Carey’s Dear Tumor:

(William bows his head. Tamora is lifted into the sky and becomes smaller and smaller until she is carried away into the clouds. William lifts his head, stands up and stares into the sky. Lights slowly fade.)

Some of the plays written by Jeff Carey: Longtime DCPA Theatre Company actor Jamie Horton, now an Associate Professor and Director of Theatre at Dartmouth, delivers one of the eulogies at the Jeff Carey life celebration. Photo by John Moore. 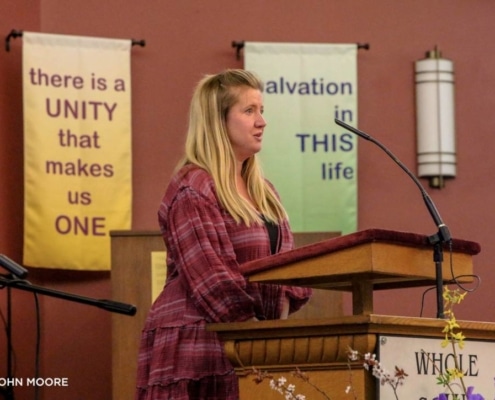 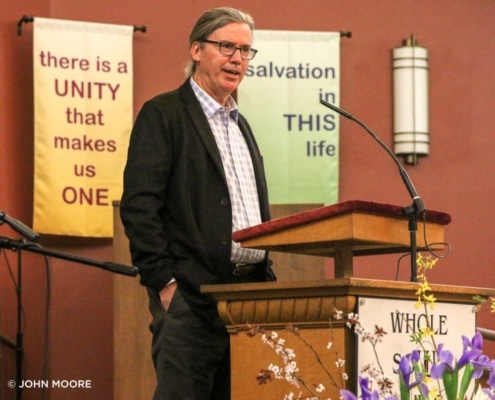 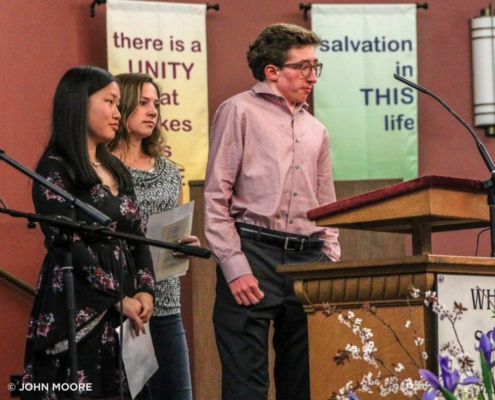 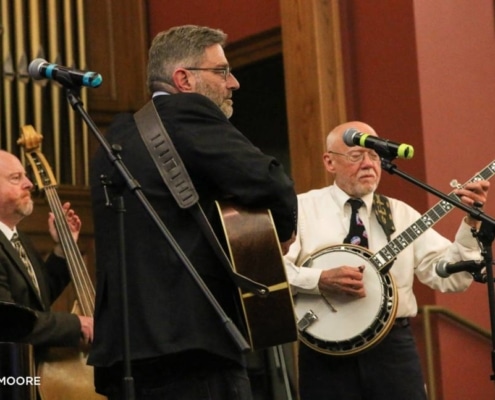 Go to our complete gallery of photos