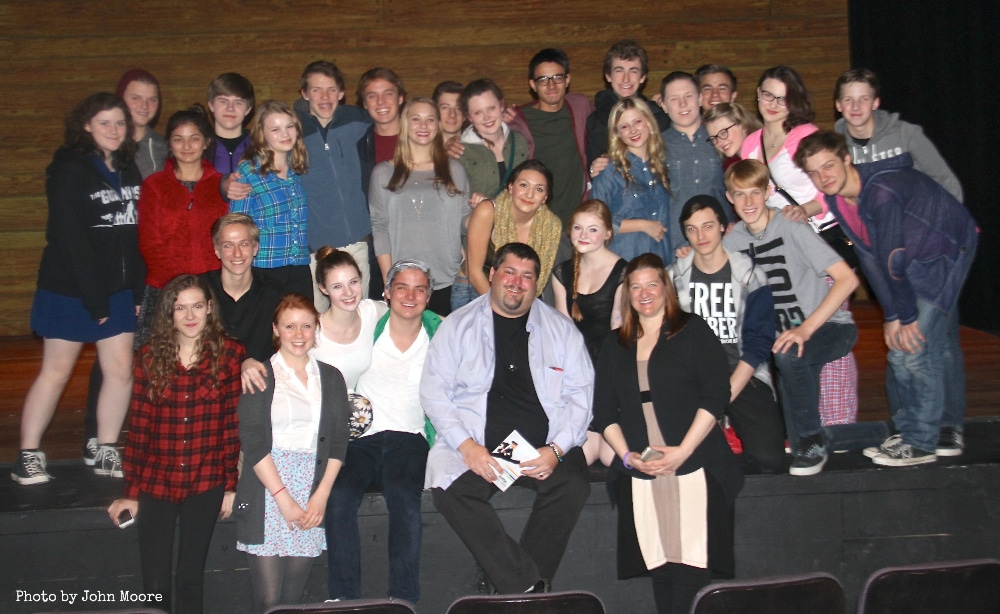 Jim Osborn with the cast of The Laramie Project at Denver School of the Arts. Photo by John Moore.


The Laramie Project, which had its world premiere at the Denver Center for the Performing Arts in 2000, continues to change lives around the world, and, this afternoon, much closer to home.

Denver School of the Arts is now believed to be the first high school to have staged both The Laramie Project and its sequel, Ten Years Later. The plays explore the brutal 1998 murder of University of Wyoming student Matthew Shepard by Aaron McKinney and Russell Henderson. And at today’s penultimate performance, one of the the sequel’s real-life characters was in attendance, and later spoke to the cast. 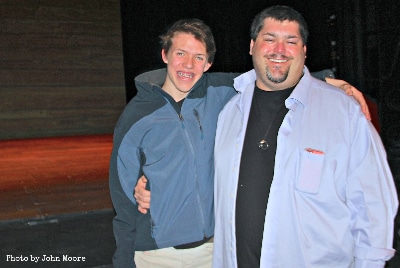 “I don’t think I stopped crying through the whole thing,” said Jim Osborn, a close friend of Shepard’s who is a “living character” in Ten Years Later. Seeing a high-school cast perform is my favorite way to see this play, and you guys did an awesome job.”

The plays, which are considered “live theatrical documentaries,” are most often presented as readings with actors behind music stands. But they were fully produced at DSA, complete with costumes, lighting and even live, original musical accompaniment. The Laramie Project, directed by DCPA Education Director Allison Watrous, was staged last weekend. Ten Years Later, directed by DSA’s Shawn Hann, was presented this weekend.

The landmark Laramie Project was developed by Moisés Kaufman and members of his Tectonic Theater Project in New York, drawing on hundreds of interviews with residents of Laramie, news reports and courtroom transcripts. In 2010, Tectonic revisited Laramie for Ten Years Later, which explores how much the town, societal attitudes and the political standing of gays did – and did not – improve in the subsequent decade.

The 2010 sequel was most remarkable for company members having landed jailhouse interviews with the two Shepard killers. Neither has spoken to any journalist since a much derided 20/20 broadcast in 2004. But both spoke to Tectonic company members. And when Greg Pierotti got McKinney to say, “Matthew Shepard needed killing,” it made headlines around the world.

Osborn is a graduate of the University of Wyoming’s education program, and was chair of the Lesbian Gay Bisexual Transgender Association when Shepard joined as a freshman. Osborn is as husky as Shepard was slight, but he reported being attacked on campus himself for being gay.

The DSA students took a road trip to Laramie to conduct research just as Tectonic members had. Some made contact with Henderson’s high-school biology teacher.

After today’s matinee performance, Osborn thanked the students for telling Shepard’s story. He asked the students whose lives had been somehow changed by their Laramie Project experience to raise their hands. Nearly every one went up.

“That’s what it’s all about,” Osborn told them. “And the reason is because Matt – and the people around Matt – affected the whole world. Thank you for helping to change the world in the same way that this play has changed you.”

Osborn said seeing the play left him with the same wonderful feeling he had when Tectonic first presented the original play in Laramie. “I wasn’t watching you portray my friends or read words that were said by people I knew,” he told them. “I saw my friends on stage tonight. You all did such a beautiful job in becoming those people.”

Osborn said the production was “awesome. Everything about it. Every decision was right. Every word was right.” 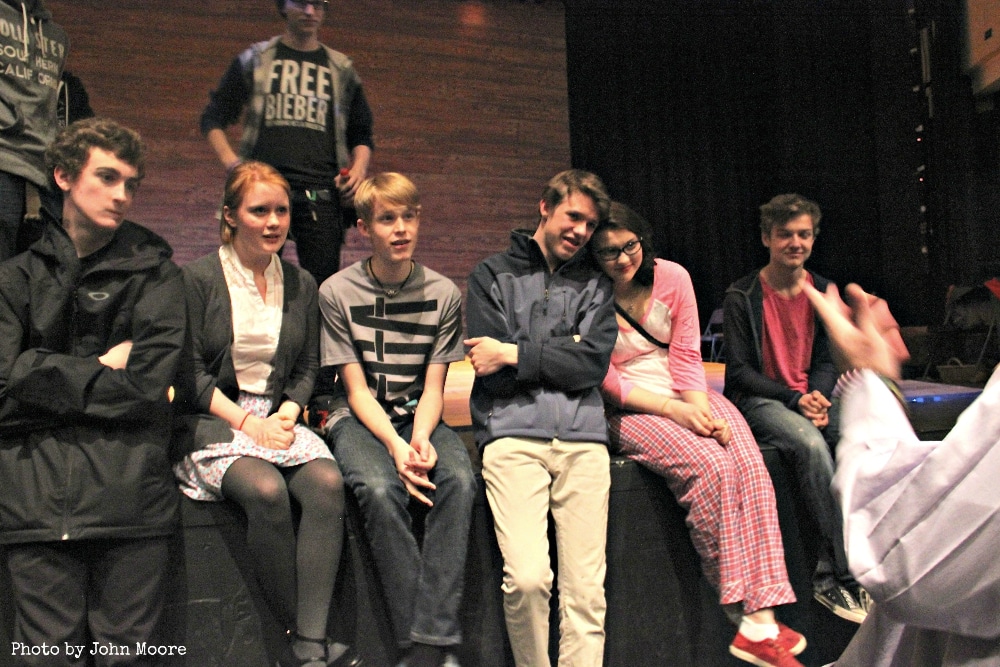 Denver School of the Arts. The Laramie Project.

Osborn had specific praise for the student actors who played Henderson (Jonas Whalen), McKinney (Chris Bowman) and himself (Alastair Hennessy). “When you walked on stage wearing that scarf,” he told Hennessy, “I nearly wet myself.” To Whalen, he said: “You look just enough like Russell Henderson to give me chills.” To Bowman, he merely said: “Dear God. Really really well done.”

But he admitted the experience was draining.

“This was really hard,” he said. “I am so dehydrated now.”

While Shepard’s presence bleeds into every second of both plays, he does not appear as an character in either story. Even so, Osborn singled out student actor Beau Wilcox, who bears a striking physical resemblance to Shepard; and Hennessy, who conducts the jailhouse interview with McKinney.

“I saw Matt on stage tonight,” Osborn said. “It was like watching Matt have a conversation with Aaron McKinney. And that was just surreal. But the reason you most remind me of him is your smile. There was a smile early on in the play, and you smiled with your whole body. Your eyes lit up. And that is the way I have always described Mat’s smile. I want to thank you for being that smile today.”

Osborn compared the Shepard killing to the Columbine massacre, which took place in the same year. “It’s horrible, isn’t it? We don’t like to talk about things that hurt us, but we have to. Because otherwise, we end up growing new Russell Hendersons and new Aaron McKinneys.”

Ten Years Later chronicles advancements in the gay-rights movement, and Osborn offered his own example. In October, he and his husband became the first gay couple to register for a marriage license in Johnson County, Wyo. 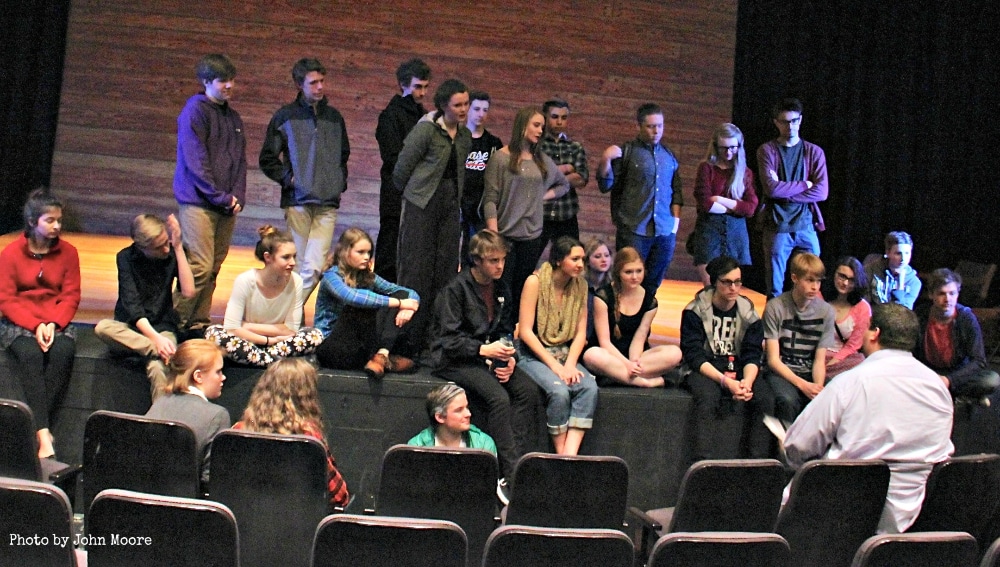