Video above by David Lenk and John Moore for the DCPA NewsCenter.


William Shakespeare’s most popular play centers around a magic potion that makes you fall madly in love with the first person — or, say, donkey — you come across. A Midsummer Night’s Dream audiences have never taken the actual implications of that comic premise too terribly seriously. After all, by end of the beloved forest romp, all of the characters pretty much end up with their true loves.

But when you think about it from today’s perspective … that’s kind of messed up. A magic potion that robs you of your free will? That manufactures intense and unnatural romantic desire? That very idea is, at the very least, ethically specious. Eric Minton, founder of a Bard fan site called Shakespeareances, once theorized that Midsummer remains Shakespeare’s most produced play because it is probably also his most accessible play. “It appeals to people who aren’t familiar with Shakespeare,” Minton said. “You are going to get the comedy even if you’re not proficient at speaking in verse.”

That’s exactly what makes A Midsummer Night’s Dream the perfect vehicle for DCPA Education’s wildly successful “Shakespeare in the Parking Lot” program, which for four years has presented abridged versions of Midsummer at Romeo and Juliet at high schools throughout the state, followed by creative and compelling classroom workshops that bridge Shakespeare’s themes from 400 years ago with contemporary issues that are relevant to today’s teenagers.

“Often we just look at Midsummer as magic and fairies and fun,” said actor and DCPA Teaching Artist Kevin Quinn Marchman. “But we wanted to apply that concept to a real-world situation that involves real stakes, and then have a conversation about it.” And at a time when full-on genetic manipulation is becoming closer and closer to a reality, the power to control emotional responses in humans seems like fairly real stakes.

So a day after presenting a 45-minute version of Midsummer in the parking lot at Strive Prep Excel School in north Denver last week, Marchman and his five fellow DCPA Teaching Artists rejoined the students in their classrooms and presented them this what-if: What if you were a mother of a teenage girl who isn’t recovering from her first crushed heart? A year has gone by, and she’s only getting worse. She’s withdrawing, and her grades are falling. She’s descending into drugs and alcohol, and starting to display signs of suicidal tendencies. Now imagine being told that doctors are conducting trials on a new drug they believe can selectively zap your daughter’s entire memory of the relationship. If she can’t remember the breakup, the theory goes, then there is no more pain to feel, which means she might be able to resume a normal life. But scientists are unsure of the long-term consequences. It’s your call … would you let your daughter take that pill?

“Is it ethical to use medicine to change our life experiences and our memories?” Marchman asked the students. “And if that is the case, what effect might that have on destiny?”

That sparked a spirited debate among the Strive students. After all, there is something undeniably appealing about the opportunity to surgically excise emotional pain from our lives — without the surgery. But most of the Strive students gravitated toward the belief that this drug would be taking science too far. “Mistakes are necessary for growth,” said one student. “Breakups are hard,” added another, “but kids have to learn how to handle painful experiences in their adolescence now, because that prepares us for the far greater difficulties to come in the future.” And another said: “You can’t erase pain. Our pain is what makes us who we are.”

Then the Teaching Artists connected the dots: This not-so-far-out medical scenario actually poses some of the same underlying questions Shakespeare asks in A Midsummer Night’s Dream:

The goal of “Shakespeare in the Parking Lot,” conceived and directed by DCPA Director of Education Allison Watrous, is to make Shakespeare more accessible and less intimidating to students who are decreasingly exposed to the man generally considered to be the greatest playwright in the history of the English language.

(Story continues after the photo gallery below.) 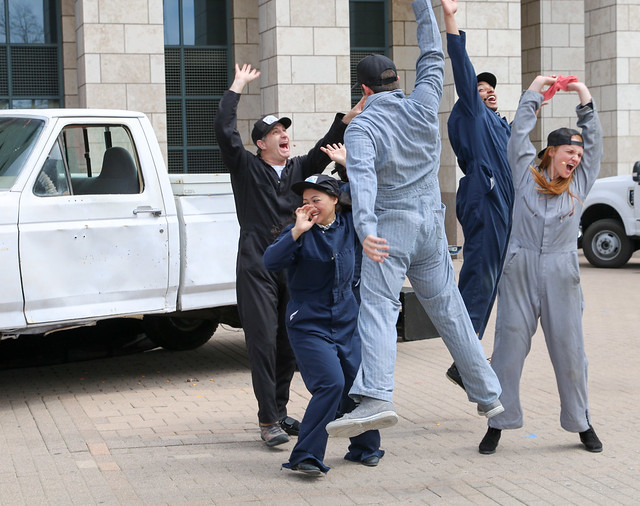 Photos from recent performances of ‘Shakespeare in the Parking’ lot at the central branch of the Denver Public Library and Strive Prep Excel school in north Denver. To see more, click on the image above to be taken to our full gallery. Photos by John Moore for the DCPA NewsCenter.


“Reading the play is just one thing,” Watrous said. “But we know that Shakespeare really comes alive when it is spoken. It is meant to be performed.”

Presenting shortened, live versions of Midsummer and Romeo and Juliet with a young and multi-ethnic cast helps connect those dots. So does performing the story in and around and on top of a beat-up old pickup truck that actor John Hauser likens to “a theatrical jungle gym.” If students are welcomed into the storytelling despite their unfamiliarity with Shakespeare’s language, “then the longer they will stay with the story,” Watrous said. ‘Shakespeare in the Parking Lot’ at Strive Prep. Photo by John Moore

“My students were talking about the play all the way back from the parking lot,” Strive Prep teacher Allison Body. “I think it was very engaging for them to see the play in a quick and fast-paced way. And then to be able to talk more about the themes the next day was really great. It’s not the same as just reading an annotated version of Romeo and Juliet in class.”

At a recent outing to Fort Morgan High School, located 80 miles northeast of Denver, the Denver Center ensemble performed for 400 students throughout a single day. “This outreach program is just amazing,” Fort Morgan drama teacher Morgan Larsen told the Fort Morgan Times. “A lot of our students never have a chance to see live theatre, let alone Shakespeare. So this outreach that Denver Center does is just a great opportunity.”

Watrous’ cast, comprised of Marchman, Hauser, Kristina Fountaine, Chloe McLeod, Joelle Montoya, Jenna Moll Reyes and Justin Walvoord, are both experienced stage actors and educators trained in drawing sometimes reticent students out of their shells. They get them up and moving, and make sure everyone has a chance to be heard.

“These actors are stellar on the stage and stellar in the classroom — and that is a hard, beautiful combination to find,” Watrous said.

And it can be quite an endurance test. The creative team, including Technical Director Stuart Barr and sound operator Erik Thurston, are often on the road by 5 a.m. and sometimes perform their plays as many four times a day, both in cold rain and on steamy-hot asphalt.

This spring, “Shakespeare in the Parking Lot” will visit 52 Colorado schools and public parks — including upcoming free, public performances of both Romeo and Juliet and Midsummer at 1 and 3 p.m. this Saturday (April 28) at 1610 Little Raven Street across from Commons Park in lower downtown Denver.

In four years, “Shakespeare in the Parking Lot” has now served about 45,000 Colorado students, including 20,000 this school year alone. By the time the current tour ends on May 11, the ensemble will have performed 132 shows (sometimes four on a day) at 52 schools in eight Colorado counties. They will have delivered 66 workshops and engaged more than 20,000 students.

Strive Prep is a public college-prep charter school whose enrollment is 97 percent persons of color, and where 49 percent of students are learning English as a second language. But two of Body’s advanced A.P. literature students said they were neither bored nor afraid of Shakespeare when they heard the Denver Center crew was coming to their school. “We already read Othello and Hamlet in class, and last year we went to see Macbeth at the Denver Center, which I loved,” said Strive Excel student Cesar Robledo. “So I already think of myself as a pretty big fan of Shakespeare.”

In the DCPA Theatre Company’s controversial and nontraditional take on Macbeth, the story was told in the future by warlocks and set against a backdrop of driving techno music and dance breaks.

“I always enjoy seeing new interpretations of Shakespeare,” Strive student Connor Ellertson said of seeing both Macbeth in a future glam world — and Midsummer on a pickup truck.