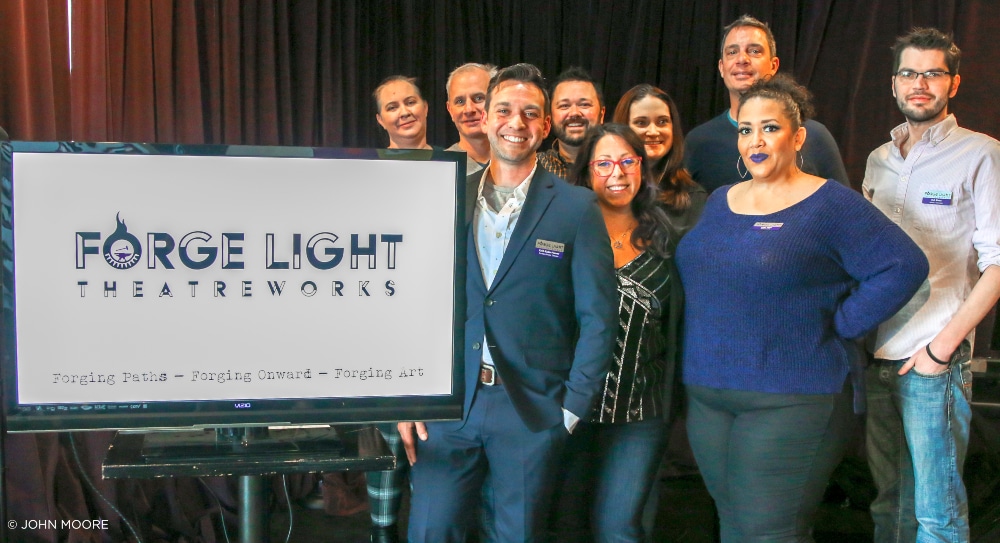 Keith Rabin-Hoover and the team from Forge Light TheatreWorks. Photo by John Moore.

Keith Rabin-Hoover just can’t keep his hands out of the fire.

Undaunted by difficulties of the past or the considerable hurdles that await him in the future, Rabin-Hoover and his many loyal supporters from the former Lucent Performing Arts announced Saturday they are resurrecting the spirit of the late Ignite Theatre as Forge Light Theatreworks, a new theatre company dedicated to producing unexplored American musicals that have never been performed on Broadway.

“We have a lot of work to do, a lot to prove and many obstacles yet to overcome,” Rabin-Hoover said at a Saturday morning announcement party – with mimosas – at Vintage Theatre in Aurora.

Ignite Theatre and its predecessor, called Gravity Defied, produced 30 musicals (and one play) between 2009-17. Ignite was known for its provocative fare, and Rabin-Hoover said that will not change. In keeping with the name, his new company is adopting the hashtag #ToTheForges.

“Every fiber of my being has been tightly woven around this ‘To the Forges’ concept for months now,” Rabin-Hoover said. 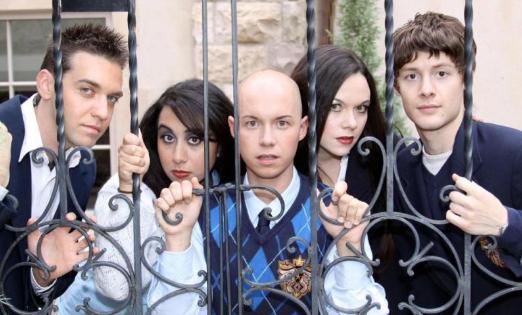 “‘Bare: The Musical’ was the first-ever staging by Gravity Defied in 2009.

Ever the sentimentalist, Rabin-Hoover is beginning this new venture just as he began back in 2009: By staging Bare, the Musical, opening June 11 and running for four days only at The People’s Building in Aurora, just across the street from Ignite’s former home at the Aurora Fox Arts Center. That will be followed in October with The Noteworthy Life of Howard Barnes. How people respond to those two offerings, Rabin-Hoover said, will determine whether there is a season in 2021.

“This first season, while exciting, is still a trial – and we must break a threshold in order for us to move into a second season,” he said. “It will be up to the community to determine whether we continue to 2021 and beyond.”

Ignite ceased operations nearly three years to the day of Saturday’s resurrection announcement. It is almost unheard of for a local theatre company to come back to life after so long gone, but Rabin-Hoover said he felt compelled to try.

“It will be up to the community to determine whether we continue to 2021 and beyond.” – Keith Rabin-Hoover

Rabin-Hoover said it is too soon to know what Forge Light’s initial budget will be or how much he and his team must now raise, but it will have to be done without assistance from the Scientific and Cultural Facilities District (SCFD), a voter-approved cultural tax that is the lifeblood of many small arts organizations. In 2015, Ignite Theatre was receiving $43,000 a year from SCFD. But once an arts organization goes dormant, it becomes even more difficult to regain active SCFD status than if his company were starting from scratch, Rabin-Hoover said.

“Because we lost our SCFD eligibility, we will not be eligible again for funding for five years,” Rabin-Hoover said. “So most of our revenue will have to come from donors, ticket sales and sponsorships.”

But he also emphasized that Ignite was never in financial straights, and that monies that still remain from 2017 will be enough to produce Forge Light’s first two offerings.

Ignite was launched in 2009 as Gravity Defied Theatre Company by Rabin-Hoover, Will Adams and Reace Daniel, with initial support from the Rocky Mountain Arts Association, home of the Denver Gay Men’s Chorus and others. But the driving artistic force was always Rabin-Hoover.

From the start, Bare: The Musical announced that Gravity Defied wasn’t going to just push the envelope. It was going to push the envelope over the edge. Bare ushered in an era of often overtly sexual fare that filled a void left in the local theatre community by the simultaneous demise of the venerable Theatre Group.

But after five productions, Rocky Mountain Arts Association ended its partnership with Rabin-Hoover and Adams, prompting them to create their own nonprofit called Lucent Performing Arts, and changing the name of their theatre company. Ignite Theatre was an audacious and at times wildly uneven company that slowly made its name and reputation by presenting highly sought regional or Denver premieres including Next to Normal, Spring Awakening, Heathers: The Musical and American Idiot alongside provocative takes on classics such as Pippin, A Chorus Line, Cabaret and Rent – with the occasional You’re a Good Man, Charlie Brown and Into the Woods thrown into the mix to keep audiences off-balance. But Ignite’s bread and spicy butter was a regular stream of smaller, cutting-edge titles for the Smash generation such as The Wild Party and [title of show].

From 2017: Ignite Theatre to cease operations after The Wiz

But when Rabin-Hoover announced his intention to leave the company after the 2017 production of The Wiz, Adams said the already overextended board could no longer dedicate the time and necessary resources to continue operating a semi-professional theatre company.

“Ignite Theatre positively impacted the lives of many thousands of audience members, as well as hundreds of the actors, directors, designers and musicians,” Adams said at the time.

Ignite set itself apart from other Colorado theatre companies by initially making giving part of its core mission. A portion of the proceeds from every production was donated to a disignated area non-profit organization, until that noble concept became no longer economically sustainable. But Rabin-Hoover is returning to that commitment with Forge Light, announcing Saturday that proceeds from all Forge Light industry-night performances, starting with The Noteworthy Life of Howard Barnes, will go to The Denver Actors Fund, which in six years has made $450,000 available to Colorado artists in medical need.

Rabin-Hoover said the company also will break ground as the first Colorado theatre company committed to supporting a sustainable artistic and operational environment by utilizing reusable and re-claimed objects whenever possible.

Note: Auditions will take place from 1-3 p.m. February 29 at The Peoples Building. Sign up here.

The Noteworthy Life of Howard Barnes 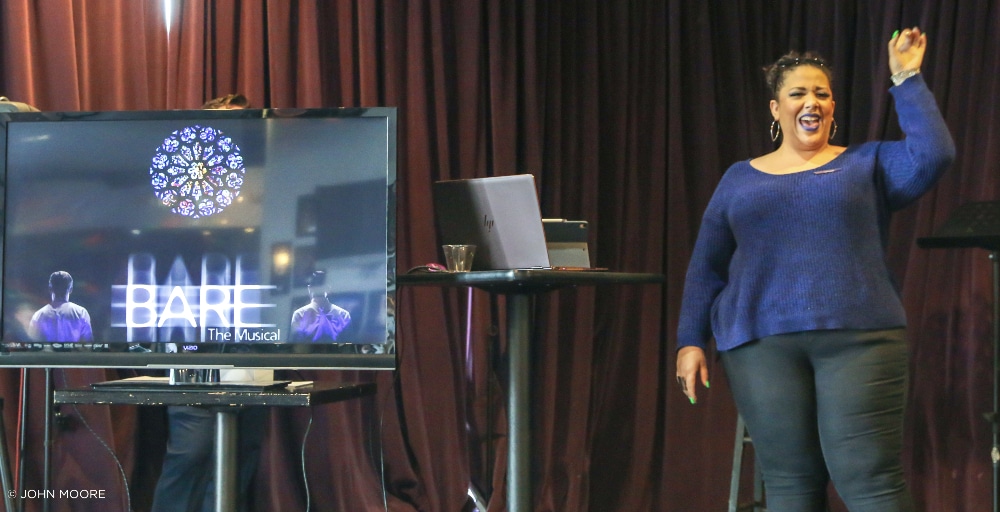 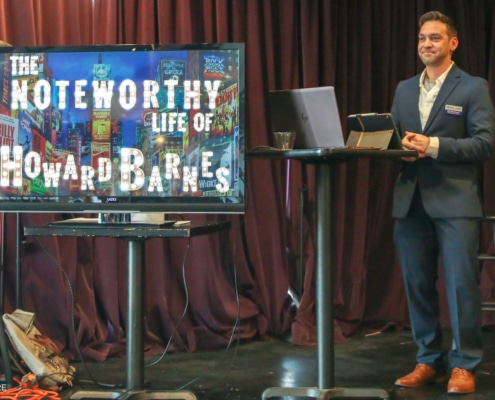 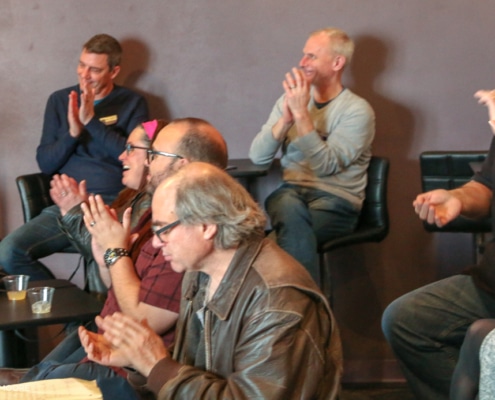 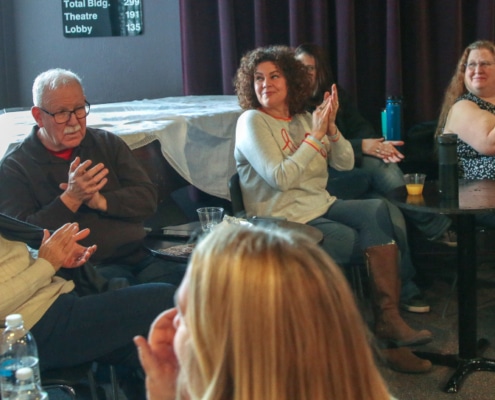 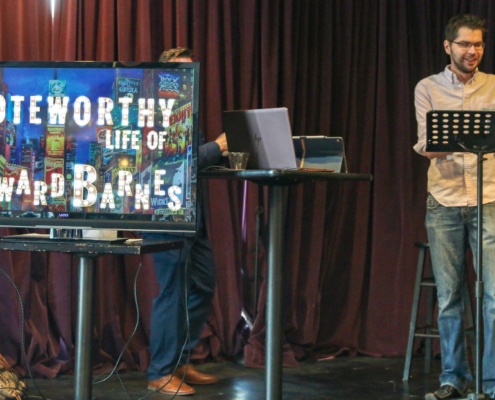 Go to our complete gallery of photos from Saturday’s announcement

And here is our Ignite Theatre photo retrospective