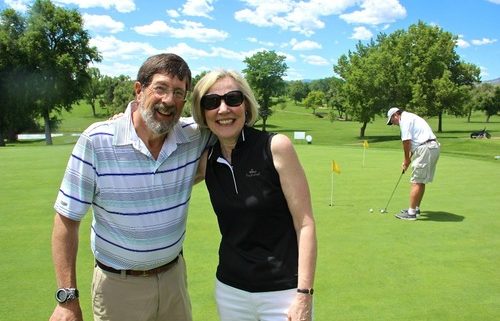 The 2014 Swing Time Golf Fundraiser tournament raised a record $50,000, primarily for Denver Center education programs, on Monday at the Lakewood Country Club. And the day was capped by a surprise announcement:

Steinberg administers the Harold and Miriam Steinberg Charitable Trust, which was founded by his late father in 1986 for the sole purpose to support the American theater. It is the country’s second-largest theater funder in America, behind the Shubert Foundation. (Read my 2009 Denver Post report on Jim Steinberg’s contribution to new American plays.)

To go to our complete album of downloadable photos from the 2014 Swing Time Golf Fundraiser, click here. Here are some excerpts. Photos by John Moore: Denver Center President and COO Randy Weeks, second from right, poses with his team on the Harley that would have gone to anyone who hit a hole in one on No. 10. No one did. Hole 15 offered a prize for the drive that landed closest to Shakespeare. Hole 17 afforded a photo op for golfers with the RMS Titanic, a clever connector to the Denver Center Theatre Company’s upcoming “The Unsinkable Molly Brown.” It fit: By Hole 17, many golfers were going down with the ship. Here, golfers who could land a chip in an inflatable raft won a $100 prize. One golfer did! To go to our complete album of downloadable photos from the 2014 Swing Time Golf Fundraiser, click here. Photos by John Moore.