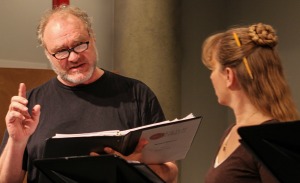 Our interview, in video and words, with Colorado New Play Summit featured playwright Lauren Gunderson, author of The Book of Will, a piece set in 1619 that explores events  right after Shakespeare’s death. “His friends and fellow actors were the ones who found and collated and valiantly published – through kind of amazing odds, actually – the first folio of his works,” Gunderson said. “It’s such an important story, because Shakespeare’s plays are so important, not just to Western audiences, but to every audience around the world.”

Here are highlights from DCPA Senior Arts Journalist John Moore’s conversation with  ‘The Book of Will‘ playwright Lauren Gunderson:


John Moore: What was your first experience with Denver?

Lauren Gunderson: I’ve known about the Denver Center since I was a kid. I started writing in high school and it was one of those kind of beacons of new work, and has remained that for me until showing up last week here.

Tell us about the origin of The Book of Will?

Lauren Gunderson: The Book of Will is a play about the friendships and the loves and the lives that are responsible for Shakespeare’s first folio. It is a commissioned piece for  the Denver Center through their Women’s Voices Fund, which is a pretty extraordinary project that focuses on making sure women’s stories are being told. So it was quite an honor for it to be under that umbrella. I was actually going to write a totally different play at the start of the commission, and then halfway through this idea just became so prominent in my mind to tell they story of the men and women who are responsible for Shakespeare’s work being known at all. So I asked if I could switch plays, and they said yes – and then here we are. (Pictured above right: Howard Sherman as Richard Burbage and Jenn LeBlanc as the barkeep Alice in ‘The Book of Will.’ Photo by John Moore for the DCPA NewsCenter.

John Moore: What story were you going to write?

Lauren Gunderson: It was going to be a sequel to my play I and You, which is a very small, modern play about two teenagers. So the complete opposite of The Book of Will, which is set in 1619 and has 10 actors.

John Moore: How did you get the inspiration?

Lauren Gunderson: It’s such an important story because Shakespeare’s plays are so important, not just to Western audiences, but to every audience around the world. I didn’t realize how precarious the printing of those plays was. The people who did this had every obstacle thrown at them. Frankly, the publishing of the first folio is the reason we still have these plays hundreds of years later. Half of the plays would have been lost. Macbeth, Antony and Cleopatra, As You Like It and The Tempest and others would have been gone to time if these people hadn’t had done the hard work to preserve them. So it felt like a great story for theatre and of theatre. And I think we’re telling a really interesting story with it.

John Moore: The issue of gender disparity is obviously a major topic of conversation in the American theatre. You seem to be a notable exception to the rule. You have four plays running in four cities, and you are currently one of the 10 most produced playwrights in America.

Lauren Gunderson: I think there are two issues: One is the issue of representing women, not just as playwrights but on stage – but by actually writing roles for actors who are women. That’s really how you make the change – by what the audience sees onstage. Most audiences don’t pay attention to who directed the play or wrote the play – but they do pay attention to what they’re seeing. So making sure we have complex, interesting, beautiful, flawed, funny characters for women is part of the work. The other part is what the Women’s Voices Fund does here at the Denver Center, which is make more plays written and directed by women. Just give women the agency, the encouragement, the support both financial and personal to just write more plays. Sometimes when you have a problem, you just have to fix it – like they have done here in Denver.

John Moore: How is The Book of Will a play for women?

Lauren Gunderson: No play is “a man’s play” or “a woman’s play” – it’s a people play. It’s a human play. Certainly that’s what The Book of Will is. It’s a play about friendship and brotherhood and sisterhood and love and loss. Those are human things; they’re not gender-specific in any way. Especially when you’re dealing with Shakespeare, who frankly was one of the real mile-markers for women in theatre. The roles he wrote for women – even though they were played by men – he wrote with such complexity and heart. There was some reason he didn’t make them just simpering ingénues. No, he gave them capacity over kings and heartbreak and great loss and muscle. So if Shakespeare did it, well – why aren’t we doing it now?

John Moore: And yet, I am guessing if a male playwright took on this topic, he might have made it an all-male story.

Lauren Gunderson: Yes. And that is something that was very important to me. Writing this play about Shakespeare and his friends in 1619 England – it could have been a wall of white men, and I was not going to write that play. Partly because it’s not interesting, and partly because it’s not true. They had these incredible women in their lives. We know this from historical fact. They left their wills and deeds to their wives, which was actually pretty rare. So they must have been pretty extraordinary women in this community. I felt honoring that would get my feminist cause out there as well, but really I just wanted to make a play that’s full of life. So, yes, I certainly made sure that this play had great women’s roles – which I think make the men’s roles better, too. We also insisted on diversity in the cast for the readings here in Denver, because Shakespeare is for everyone. He’s all over the world. We wanted to make sure in our first outing for this play in the world, that we did our best to represent the great collection of people who enjoy Shakespeare and find it meaningful.

John Moore: So for those who don’t know, explain what a folio is and why it was so important.

Lauren Gunderson: The first folio is William Shakespeare’s full collection of plays, which were published after his death in 1623. The reason that this particular collection is so valuable is because the paper, the ink and the binding made it last. The other printed versions of Shakespeare’s plays were these cheap, newspapery things called quartos, and they’re mostly gone because they’ve disintegrated over time. And they weren’t actually the versions Shakespeare wrote anyway. They would send young men to the theatre to write down the plays as they were being performed, and then they would go back and print these crappy versions with half of the “To Be or Not to Be” speech, or a character might be missing. So we would not have Shakespeare the way we know him today if all we had were those. Half of the plays were done in quarto so, literally, these plays would have washed away. And the other half of the plays weren’t printed at all, in any version. So really the stakes were simple: We wouldn’t have Shakespeare today if we didn’t have the folio.

John Moore: Is addressing the question of authorship a part of your play?

Lauren Gunderson: It is not. Shakespeare wrote Shakespeare, that’s why it says “Shakespeare.” But what our play does examine is the fact that he was dead, so he didn’t edit the folio himself. The folio is a collection by all the men and women who knew him and worked on this document. So the folio is not written by Shakespeare, it’s written by Shakespeare’s community who fought for his legacy. They did the hard work of going, “I’m not sure I know this line exactly,” or, “I think it was this instead,” or, “We have this document that says it’s that.” They were detectives. They had to figure out what Will would have wanted.

John Moore: How has your play been affected by the second week of development you get here at the Colorado New Play Summit?

Lauren Gunderson: Having two weekends of readings separated by a week of workshopping is incredibly valuable. You never know a play until there’s an audience. And so we learned so much with our first reading. To be able to get back to the text and rewrite in a way that is not just a quick fix but to really sink in and do the hard thinking and the collaborative work that a new play requires …  that’s really what this process allows, and I an incredibly grateful for that.

John Moore: What are playwrights around the country saying about the Denver’s Center’s new-play development program?

Lauren Gunderson: Everyone who knows new plays knows about the Colorado New Play Summit now. It’s a place to gather to see new plays. It’s a place for community. It’s a place to just do the work – the real work. That takes time, it takes incredible talent in one room – and it takes some coffee and some cookies. And it’s not just the Colorado New Play Summit itself, but the commissioning that the Denver Center does, and the world-premiere productions that it stages. Everyone knows about the commitment to new plays here. And I’m excited that the community of people who know it gets bigger every year.

‘The Book of Will’ at the 2016 Colorado New Play Summit. Photo by John Moore for the DCPA NewsCenter.