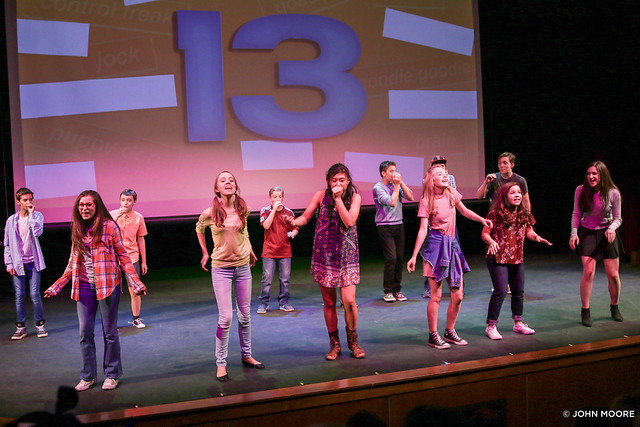 Photos from the two performances of ’13 The Musical’ at the Mizel Center on Oct. 8. To see more, hover your cursor over the image above and click the forward arrow that appears. Photos by John Moore for the DCPA NewsCenter.

Young people under 18 have now raised $35,000 for the grassroots nonprofit that serves local artists

Watch the announcement as it happened on Facebook Live

What do most kids do when they want to raise money for charity? Set up a lemonade stand, or organize a car wash? A group of 13 young, Denver-based performers who have grown up on professional stages throughout the Denver metro area decided to put on a show for the Denver Actors Fund.

With help from some of the local theatre community’s biggest names, the teens and their parents self-produced Jason Robert Brown‘s 13: The Musical, culminating in two performances at the Mizel Art and Culture Center‘s Wolf Theatre on Sunday, Oct. 8. Their efforts raised $13,188 for the DAF, a grassroots nonprofit that in four years has provided both financial and practical relief to members of the Colorado theatre community in situational medical need.

That makes 13: The Musical the second-largest fundraising effort in The Denver Actors Fund’s four-year history. It also puts the nonprofit over the $250,000 mark in overall funds raised. Of that total, almost $130,000 already has gone back out to individual artists to help with hospital and dental bills, or to pay for medical supplies, chemotherapy treatments, burial expenses and more. In addition, DAF volunteers have logged more than 500 hours of practical service ranging from transportation to snow-shoveling to personal company, meal preparation and delivery, and groceries.

Denver Actors Fund Founder and Executive Director John Moore said young people under 18 have now raised more than $35,000 for the DAF through their individual efforts, not even counting their regular participation in larger benefits such as the annual Miscast variety show.

13: The Musical was made possible largely because of the parents’ investment of time, money and performers. The parents absorbed nearly all production costs as their own personal donations so that all proceeds from ticket sales and other revenue sources would go fully to the DAF. ’13 the Musical.’ Photo by John Moore

“The parents of these kids are a finely oiled machine of theatre moms who tackled the job of producing a full musical production like pros,” said Director Robert Michael Sanders, who himself is responsible for raising more than $30,000 for The Denver Actors Fund. “They handled the marketing, ticket sales, rehearsal space, driving, coordinating, costumes, ushers, volunteers, fundraising and accounting head-on, all at great personal sacrifice and expense. That allowed me and my staff to focus on the performance.”

Donate to The Denver Actors Fund Erin Katz, mother of actor Hannah Katz, said there was something delightfully symmetrical about the final numbers: 13 performers appearing in 13: The Musical and raising just more than $13,000.

“I feel like all of the stars aligned for this project,” Katz said. “That number has a magical quality to it.”

Hannah Katz, a sophomore at Cherry Creek High School, has been raising money for The Denver Actors Fund through both group and self-initiated efforts for more than three years. Katz and castmate Darrow Klein each raised money for the DAF as part of their Bat Mitzvah service projects, among other efforts.

“We wanted the proceeds from 13 to go to The Denver Actors Fund because the DAF gives back to the people who have helped us become who we are,” said Klein. “We have been raised by the people of this theater community, and we want to help them when they need it most. It is a great cause that supports great people.”

Erin Katz said many of the young cast members have been performing in shows all along the Front Range since they were as young as 9. “Many of us parents have this sense that the larger theatre community has helped raise our kids,” she said. “They are developing into the young adults they are because of the people in the larger, local theatre community. So, doing something the kids could really own and do themselves and would give back to the community was a really important value for us as parents to teach our kids.”

13 is an original musical by Brown, who is best known for The Last Five Years and The Bridges of Madison County. Brown heard about the effort and sent the cast his recorded well-wishes before Sunday’s two performances. So, too, did a Colorado member of the Broadway cast of Hamilton.

The book is by Dan Elish and Robert Horn. 13 premiered on Broadway in 2008 and is the only Broadway musical ever presented with a cast made up entirely of teenagers. It’s a coming-of-age story about a pre-teen boy who is plucked from his life in New York City and plopped into a sleepy Indiana town following his parents’ divorce.

This all comes right on the heels of the return of “The Killer Kids of Miscast,” who were given that name after a remarkable performance at last year in which at Miscast, they performed a twisted variation of “The Cell-Block Tango” from Chicago. A video of that performance has been viewed nearly 500,000 times on YouTube and Facebook.

This time, six of the 13 cast members  performed a more Denver-centric parody of “Hey Officer Krupke” from West Side Story, in which they comically lament not yet being seriously considered by area directors for adult roles.

“These are not only our next generation of actors,” Sanders said, but a group of young people I believe possess the skills as people to grow up and show the world how to be a better place again.” The cast with parents and other crew members. Photos by John Moore for the DCPA NewsCenter.

For more information on the Denver Actors Fund and its services, or to donate, go to DenverActorsFund.Org.