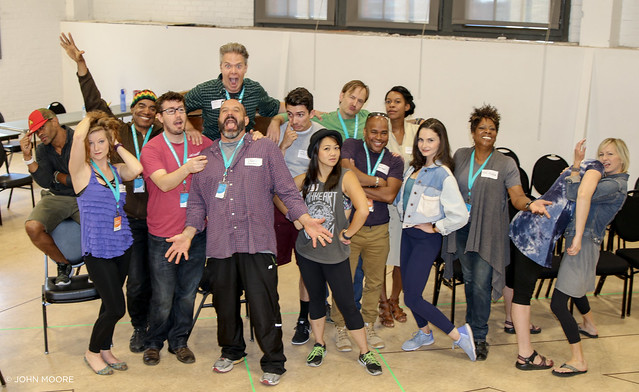 Photos from the first rehearsal for Off-Center’s upcoming off-site, immersive production of ‘The Wild Party.’ To see more, hover your cursor over the image above and click the forward arrow that appears. Photos by John Moore for the DCPA NewsCenter.

The audience will become, like the characters in the play,
‘a roomful of strangers who call themselves friends.’

The Denver Center is preparing to present the Jazz Age musical The Wild Party as a 360-degree immersive theatregoing experience where the 208 audience members are guests at a corker of a gin-soaked Big Apple soiree, right alongside the 14 professional actors in the ensemble. It will be staged in what was once an airline hangar at the new Stanley Marketplace in the Stapleton neighborhood.

And that is not at all how composer Michael John LaChiusa originally imagined his piece to be staged. Like most musicals, The Wild Party was first presented in front of an audience separated from the stage by theatre’s nearly ubiquitous, invisible “fourth wall.”

“Our production is going to put our audience directly in the Jazz Age,” two-time True West Award-winning Director Amanda Berg Wilson said Tuesday at the company’s first rehearsal for the show opening Oct. 11.

The DCPA’s adventurous Off-Center wing is known for creating original nontraditional work in nontraditional spaces, most notably last year’s sprawling Sweet & Lucky, which played out in a huge warehouse north of downtown. The Wild Party will be its first musical, and first scripted work.

The musical is based on a scandalous, book-length poem written by Robert Frost protege Joseph Moncure March in 1926. It was described as “a kind of obscene, more destructive take on Shakespeare’s A Midsummer Night’s Dream by Scott Miller, Artistic Director of St. Louis’ New Line Theatre. The poem paints a vivid and decadent picture of Manhattan just before the market crash. It centers on the damaged, reckless relationship between a dancer named Queenie and a vaudeville clown named Burrs. The audience here will witness many personal dramas unfold up close and in three dimensions.

“The audience is not going to be passive witnesses to the party,” said Wilson. “They are going to be integral components of the party – and its conspirators. So we are going to encourage them to help mix the bathtub gin; to console the coke-snorting wannabe starlet; to read love letters; to be pulled into boiler rooms for intimate moments; to see things they are not supposed to see.” In the end, the audience will become, like the characters in the play, “a roomful of strangers who call themselves friends.”

Which helps explains why this is a 21-and-over evening. It’s a party, after all. And apparently a wild one.

“Our goal with each audience member is that they are going to experience a kind of release that you only have when you have had a really wild night,” Wilson said.

Here are five more things we learned about ‘The Wild Party’ at the first rehearsal:

The source poem, which went virtually unread for two years because no publisher would touch it, inspired iconic beat writer William Burroughs to become a writer. “It is a witty and risqué poem about two vaudeville performers who fight, make up, throw a party and flirt with danger,” Wilson said. “It name-drops Martha Graham and Langston Hughes, and the book for the musical is by George C. Wolfe (the Public Theatre icon who first directed Angels in America). The story is set at a time when America was waking up to its identity as a wild and creative nation that was emerging into its own sense of self separate from Europe. That sense of self was really born in vaudeville and speakeasies and the avant-garde of the 1920s when jazz, arguably the most American of art forms, was being born. These are people who are not only trying to figure out who they love but who they are and who they will present as. Ambisextrous, Jewish, uptown, downtown, black and white identities are all explored in these jazz-soaked numbers.”

The audience will be encouraged (but not required) to dress up for the party. Says Costume Designer Meghan Anderson Doyle: “I think we get the best of the 1920s in this piece because we get the glitz and glamour of beaded dresses and tuxedos and dinner jackets and champagne, and then we get the soft sensuality and the vulnerability of stockings and garter belts and bathtub gin.”

The Music Director is David Nehls (pictured right),  who has helmed the music for most every musical at the Arvada Center for more than a decade. “I am very excited that we have an amazing, seven-piece live band,” Nehls said. One of those players is Trent Hines, himself an active Music Director in the local theatre community. For this production, Hines is also being integrated into the story as an actor.

The cast is made up entirely of local actors. Wilson, also the founder of a Boulder theatre company called The Catamounts, performed in Sweet & Lucky alongside Diana Dresser, Jenna Moll Reyes and The Wild Party choreographer Patrick Mueller. “Having an all-local cast is evidence that we really do have the talent right here to pull off a show like this,” said Wilson. “And I think it is great that as the Denver Center continues to experiment with immersive theatre, we are developing a base of talent right here in Denver with an increasing set of tools and vocabulary so that we can keep making this kind of work. And we are discovering that audiences are really hungry for it.”

The man charged with turning the airplane hangar at Stanley Marketplace into a New York apartment is Jason Sherwood, who first came to the Denver Center in 2014 as an assistant on The Unsinkable Molly Brown and returned last year as the lead Scenic Designer for Frankenstein. This season, he will create the worlds for the Denver Center’s The Wild Party, Macbeth and The Who’s Tommy.

At  a glance: You’re invited to leave your inhibitions (and Prohibitions) behind as you join a decadent party in the Roaring Twenties, brought to you by the producers of Sweet & Lucky. Indulge your inner flapper as you mingle with an unruly mix of vaudevillians, playboys, divas, and ingénues in a Manhattan apartment lost in time. Debauchery turns disastrous as wild guests becomes unhinged and their solo songs reveal the drama bubbling underneath the surface. Whether you’re a wallflower or a jitterbug, you’ll think this jazz- and gin-soaked immersive musical is the bee’s knees.

About the Stanley Marketplace
The Stanley Marketplace, which opened last year near the Stapleton neighborhood just east of Denver, is a community of like-minded businesses and residents who believe sustainable retail and community development. The more than 22-acre space, which occupies 140,000 square feet, was once Stanley Aviation headquarters, where airplane ejector seats were engineered and manufactured. Today it is an adaptive re-use community hub, home to a park, beer hall and an urban marketplace. All businesses are local and independent. The address is 2501 Dallas St. in Aurora. MAP IT