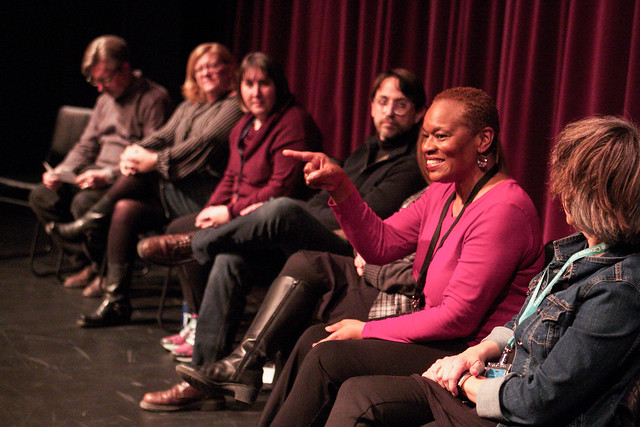 Photo gallery: The cast of ‘Two Degrees’ takes questions from the audience at Perspectives, a panel conversation held before the first public performance of every play. To see more photos, click the forward arrow on the image above. Photos by John Moore for the DCPA NewsCenter.

There was an exchange at Friday’s public Perspectives discussion that both acknowledged the deep divide in America over climate science while also illustrating just what the DCPA Theatre Company’s new play Two Degrees aspires to do: Start a dialogue among not necessarily like-minded audience members.

Two Degrees opens just three months after the Pew Research Institute released a major study that found only 48 percent of Americans understand the Earth to be warming because of human activity.

The play introduces us to a scientist named Emma who is called to Washington to testify – reluctantly – before a congressional committee on proposed climate legislation. Compounding her anxiety: It’s the one-year anniversary of her husband’s death. It’s meant to be a human story about both a woman and a planet in crisis.

And the first chance for anyone to get together in a room and talk about it was at Friday’s Perspectives – an ongoing series of conversations between audiences and DCPA Theatre Company creative teams that is presented before every first public preview performance.

“We are the first generation to feel the effects of climate change, and we are the last generation that can do something about it,” Two Degrees director Christy Montour-Larson told those gathered at the Conservatory Theatre before last Friday’s first performance. Many in the audience surely took that as an environmental rallying cry. But at least one man in attendance took exception.


“That is an extremely alarming statement that really is not factual,” said the man, who said he does not consider himself a denier of climate science. “I think there is nothing more certain than that the climate is changing. The question I have is to what degree humanity is influencing the change. I don’t consider this to be ‘settled’ science, and there are a lot of us out in the world who feel that way.”

Playwright Tira Palmquist responded by pointing to research that suggests 97 percent of climate scientists around the world have endorsed the conclusion that humans have played a role in global warming since the Industrial Age. “There is scientific evidence to suggest that what we have done has made an impact,” she said.

The man remained skeptical, but said he would keep an open mind when he saw the play later that night. Palmquist said the exchange is an example of the proactive role live theatre can contribute to any community. “For me, this is a play about the difficulty we have in having these kinds of conversations,” she said.


Two Degrees Dramaturg Heather Helinsky said the exchange is what the play is all about.

“For a play to be a good play, it has to give you characters with different points of view, and this play does that,” Helinsky said. “You don’t want a play that just preaches one side. A successful play has to make you want to continue having that conversation after you leave.”

And here are five more things we learned about ‘Two Degrees’ at Perspectives:

Every DCPA Theatre Company production has a week of “preview performances” before it officially opens. And Montour-Larson was asked, well, what exactly is the point of these preview performances? Once a production opens, it’s pretty much locked down. But during preview week, the work continues. The designers continue to hone staging details. If it’s a new play like Two Degrees, the cast continues to rehearse line changes by day and perform the play before live audiences by night. “During a preview performance, we add the most important element, which is the audience,” Montour-Larson said. “All of us (on the creative team) are watching the play along with all of you, but I see less of what is happening onstage because I am watching you guys.”

Two Degrees has changed since it was presented as a reading at the 2016 Colorado New Play Summit last February. And it has changed more since the election in November. “After the Summit readings last year, we were given this big packet of responses from the Denver audience members,” said Palmquist. “But as I was gearing up to make my revisions, I thought, ‘I don’t think I can re-write this until I know the outcome of the election.’ ” So she waited. Because the energy in the room would be quite different depending on whether audiences would be attending Two Degrees at the start of a Clinton Presidency compared to the start of a Trump Presidency. After Trump’s victory, she said, “We now have a White House that has said it is going to dismantle some of the things the Obama administration did in terms of climate-change legislation. And so for me, the engine of the play became a little more ratcheted-up. The environment in Washington (for a person like Emma) is not so friendly.”

Two Degrees is the first mainstage offering to be held in the Jones Theatre (the DCPA Theatre Company’s smallest venue) since A Boston Marriage in 2004. That posed some unique challenges for Scenic Designer Robert Mark Morgan – not the least of which is that the story has 11 scenes in 10 different locations. “The Jones is a three-sided ‘thrust’ stage, so it’s a little like Florida,” Morgan said. “And it’s just a different show if you are watching from the sides than if you are watching from the front, so it’s a tricky thing for us to make sure the entire audience gets the same story.”

From the start of the rehearsal process, the cast and crew have adopted what they call a two-pronged “daily action plan.” Helinsy and Stage Manager Karen Federing provide the team with a link to relevant reading on climate change, and suggest a proactive daily step each person can take to make a positivel impact in their daily lives. Over the past month, the cast has studied the work of the League of Conservation Voters, Al Gore’s Climate Reality Project, EarthJustice.Org and Denver’s own Snowriders International, among others. “The idea is to infuse our storytelling with a sense of urgency,” Montour-Larson said.

Emma, a climate change scientist, is invited to share her findings at a Senate hearing that could define her career and her cause. But if she can’t overcome her tumultuous inner struggle, her dedication and sacrifices may not be enough. Two Degrees was developed at the 2016 Colorado New Play Summit.