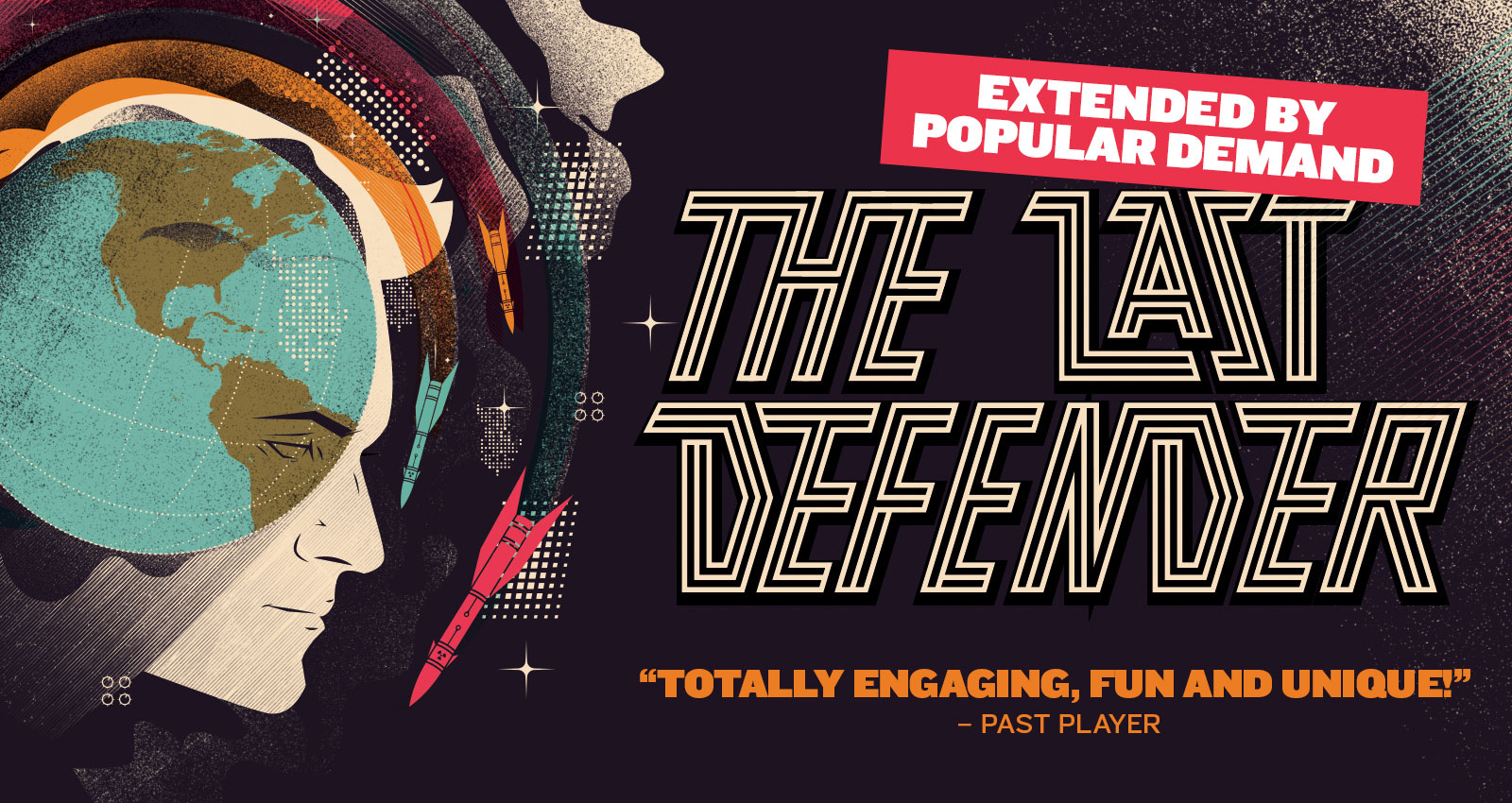 The live action game that makes you the hero!

It’s 1983, the United States and The Soviet Union are still mired in the Cold War, and the only hero that can end it is… you!

Head to The Defenders’ underground headquarters, where we’ve deployed artificial intelligence alongside 8-bit arcade-style computer technologies to control our nuclear weapons. Suit up and work as a team to gather information, solve puzzles, and make increasingly difficult decisions in real time. Do you have what it takes to complete The Defenders’ final mission and save the world?

The best puzzle and games designers from Chicago have teamed up to create a wholly new experiment in immersive storytelling and stagecraft. It’s part performance, part puzzle hunt, and part live action game. The Last Defender draws on the political and social turmoil of the 80s, the golden age of arcades, and impending nuclear threats to give audiences a one-of-a-kind storytelling experience.

“IT WAS AMAZING!!!! So much fun! Teamwork! Friendship! WOW!”

“I thought it was great — my four companions *loved* it. Challenging, intense, and just plain fun.”

“Such a fun time and a great date night experience. Loved it.” 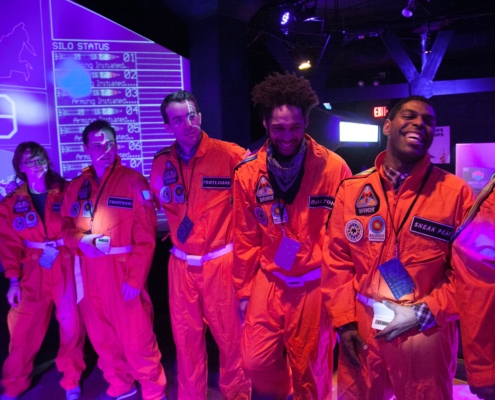 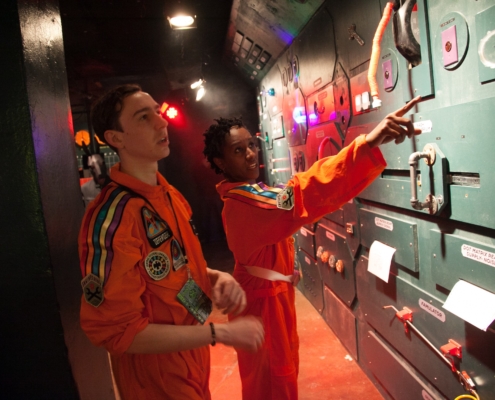 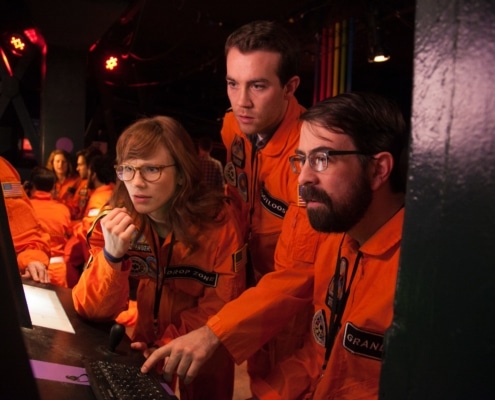 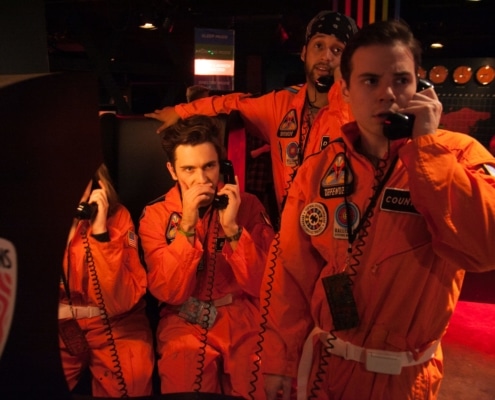 The Last Defender is a cooperative game where the players must work together and communicate as a team to succeed. To win the game, you must gather and share information, solve puzzles and work as a group to make increasingly difficult decisions.

WHAT AGES CAN PLAY?

The Last Defender is designed for adults and is recommended for ages 15 and up. Patrons under the age of 13 will not be admitted into the game. The collaborative nature of the game and the problem-solving skills required to be a Defender mean that this one isn’t for younger audience members.

WHAT IS THE DRESS CODE?

On arrival, each player will receive a standard issue jumpsuit to be worn over their civilian clothes. We suggest dressing in comfortable clothing to more easily perform your duties as a Defender. Athletic sneakers and pants are preferred.

As a part of the ticket buying process, Defenders will fill out the Jumpsuit Specification form during checkout so that HQ will have the right sizes available for each player.

HOW LONG IS THE GAME?

The experience lasts approximately 90 minutes without an intermission. You should arrive at least 15 minutes before your scheduled start time.

CAN WE BUY OUT A WHOLE TIMESLOT?

You bet! There is a max of 16 player spots at each show. A group can bring between 8 and 16 people. Buy-outs are perfect for birthdays, corporate team building, bachelor/bachelorette parties and more. Weekday afternoon time slots are available every Thurs at 12:30 and 3:30pm Aug 1 – Sep 5 (subject to availability). Contact our team about a group buy-out!

It’s not a play, but it is a crazy-awesome story about mutually assured destruction. This live action game will make you the hero. There will not be live actors in the room or an audience watching. Only players (that’s you) and a few masked helpers to ensure a smooth experience. You will work side-by-side with folks you know and strangers to solve puzzles and advance the story. You’ll play inside a fully designed Defender HQ, complete with locker room, supercomputer, communications and information terminals, rec room, and more.

NOPE! Everyone who attends will step into the shoes of a Defender and play the game. There isn’t an audience watching you play. You can participate in as few or as many puzzles as you choose (though we’ll highly recommend getting your brain working on as many as you can). The world is in crisis, after all! A maximum of 16 tickets are sold for each game time and everyone will play.

WHERE IS DEFENDER HQ?

The Last Defender takes place at 1510 Blake Street, Denver, CO 80202 , beneath the Patagonia retail store. You will enter through the black doors to the left of Patagonia.

There are several parking lots and public transportation stops nearby. Make sure you arrive on time to your experience, you don’t want to miss out!

WHY AM I BEING ASSIGNED A SEAT NUMBER WHEN I BUY TICKETS ONLINE?

There are not any theatre seats. In fact, you’ll be up and moving most of the game. When you buy your tickets online, there will be a colored dot next to each performance. If it’s green, no one else has signed up for that timeslot. If it’s yellow, there are some other people that have bought tickets. If it’s red, that time is almost sold out. There must be at least 8 people to play the game, so we recommend signing up for yellow time slots if you’re coming by yourself or with a small group.

I CAN’T ATTEND THE SHOW ON MY TICKET DATE. CAN I EXCHANGE MY TICKETS FOR A DIFFERENT DATE?

If your ticket date is more than 14 days away, you may call the box office to inquire about inventory. If tickets are available for another experience, the exchange is subject to a ticket exchange fee and the difference in pricing (should there be any).

Due to demand, if your ticket date is fewer than 14 days away, we are unfortunately unable to exchange the tickets.

CAN I PLAY MULTIPLE TIMES?

Absolutely! Make sure you arrive early to let the box office know what department you were in before so you can try out different puzzles.

The Last Defender is not a performance you watch, but rather a game you play. You will need to move around the space among multiple game stations with your fellow players. For a majority of the 90 minute experience, you will choose which station to be engaged in and how much or little you’d like to move around. Some stations have seats, and some do not. Around the room, small folding portable seats are provided (like at a museum), and you should use these as much as you like, moving them between stations, or staying put.

The Last Defender is wheelchair accessible. There is an elevator, wheelchair ramp, and accessible restroom available, and the game can accommodate up to two wheelchairs or other mobility devices per time slot.

If you or your guest require accommodation for vision, hearing or mobility please let us know ahead of your attendance, and we’ll ensure you are placed on a team where all puzzles will work well for you. Email accessibility@dcpa.org at least 14 days prior to your experience.

No playing under the influence; anyone who is inebriated or exhibiting other bad behavior will be ejected from the game.