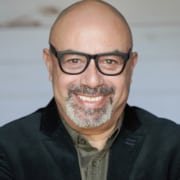 HERBERT SIGUENZA (Quijano/Quixote) performed the role of Quijano/Quixote in 2021 at the Round House Theatre in Bethesda, Maryland. Herbert is a founding member of the performance group Culture Clash. He is currently the Playwright in Residency at the San Diego Repertory Theatre through an Andrew W. Mellon grant. His written plays are El Henry, Manifest Destinitis, Steal Heaven and Bad Hombres, Good Wives. Herbert was last seen at DCPA in 2013 with his one person show, A Weekend with Pablo Picasso. Film credits include: Pixar’s Coco. He dedicates this performance of Quijano/Quixote to the heroic people of Ukraine.