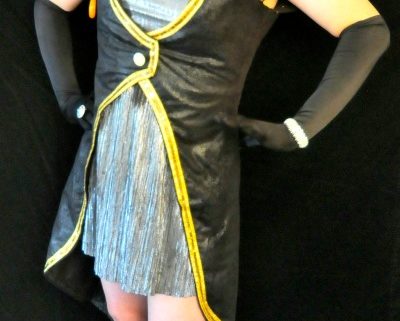 Video: Captain Shirley Delta Blow and her Drag Queen Time Machine give us a brief history of drag through time travel.

By Elizabeth Jewitt
For the DCPA NewsCenter

Stuart Sanks’ drag persona Shirley Delta Blow is no stranger to the Denver drag scene, and her colorful, over-the-top costumes are just as unforgettable.

Shirley is starring in the DCPA’s upcoming production of Drag Machine from March 12-29 in the Garner Galleria Theatre.

“I have this gorgeous prom dress – a strapless gown with a leopard print in the colors of the rainbow,” said Sanks. “It’s such a fun dress. I usually top it off with a gigantic pink foam wig and my favorite heels. Colorful, sparkly accessories like a peacock bracelet and big crystal necklace complete the look.”

Sanks wore the same dress while performing as Shirley in Club Denver as part of last year’s The Legend of Georgia McBride post-show festivities.

“I had to duck just to fit through the doors,’ he said. “Remember, in drag, more is more!”

Sanks often has Shirley’s outfits custom-made. Drag is all about the interpretation of a song, and Shirley focuses on matching the look to the tune.

“The outfit for me is based in reality, and then I turn it up a notch,” said Sanks, who describes Shirley’s outfits as fun, playful, big and over the top.

Like many women, Shirley appreciates a great pair of shoes, but she often has trouble finding them in her size: Women’s 13.

“As a young queen, I went to all the shoe stores looking for the right pair, but few stores carry my size,” said Stuart. “Many designers don’t make the styles I look for that big.

“I bought my first pair of heels with my mother at a mall in Kansas. She thought I should get something sensible, but I knew I needed something fashionable so I bought the tallest pair of heels I could find. I think it took me two or three walks up the aisle to feel comfortable, and there has been no turning back. I don’t think that Payless has been the same since. I even wore them to the Olive Garden for extra practice.”

“They have a fine selection of shoes, wigs and all the accessories for a girl like Shirley.”

Stuart’s friend Meghan Anderson Doyle, who has designed many DCPA Theatre Company productions and is one of the costume coordinators for Drag Machine, makes most of Shirley’s outfits. But when the two go out looking for fashion accessories and fabrics, they keep their shopping intentions to themselves.

“On one trip, we found a bolt of Alexander Henry’s man fabric, a classic pin-up look with beefy men dressed in fun and flirty Christmas get-ups. We couldn’t decide how we would use it, but knew it needed to come live in our cart,” said Stuart.

Stuart has received many curious questions when he’s revealed the fabric he’s buying is for him.

“We have learned to keep out mouths shut. When asked about what we were making, we responded, ‘Pillows.’ The ladies at Joann Fabrics think I have lots and lots of pillows!”