Anthony Powell is the ghost of A Christmas Carol past, present and future. 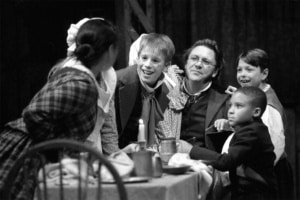 Powell, the new director of the DCPA Theatre Company’s seasonal favorite, has himself performed as an actor in five Denver Center holiday stagings going all the way back to 1992. He played Bob Cratchit three times, Old Joe once and finally, in 2001, the jovial Mr. Fezziwig.

Powell believes all those iconic Dickens characters live inside him still – and more. Friends can easily see Fezziwig’s festiveness and Cratchit’s earnestness in Powell’s daily demeanor. Powell leans more toward Marley, the ghost who is determined to save Scrooge’s soul, as well as the cheerful nephew Fred, who steadfastly invites his miserly old uncle to Christmas dinner each year despite the near-certainty that he will be rebuffed.

“On a bad day, I relate to Jacob Marley the most, and on a good day – Fred,” said Powell. “Of course, we all have our Scroogey days, and we have to fight against that. But to me, Marley is just the most heartbreaking of them all. I mean, this is more than a last-ditch effort to save his best friend’s soul – his own redemption is at stake, too.” 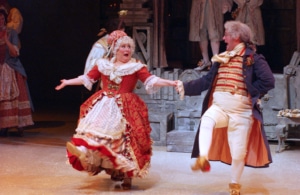 Leslie O’Carroll and Anthony Powell in A Christmas Carol, 2001. Photo by Terry Shapiro

Powell really loves the holidays, and it can’t be overstated what Dickens’ classic holiday story means to him. “To me, A Christmas Carol is Halloween, Thanksgiving, Hanukkah, Kwanza and December 25 all rolled into one,” he said. “It covers all the bases.”

Powell holds dear to childhood memories of hunkering down on the couch with his mom to watch the 1951 British film version of A Christmas Carol starring Alastair Sim on the family TV.

“We didn’t do The Nutcracker at Christmas,” he said. “We would gather together and watch the film on TV every year, and that really was our family holiday celebration.”

Powell has directed 36 mainstage productions for the DCPA Theatre Company, most under the venerable former Artistic Director Donovan Marley from 1990-2005. But even after moving on and becoming Artistic Director of the popular Stories on Stage live storytelling series, Powell has remained active in the Denver Center community, directing acclaimed productions including most recently Lord of the Flies and All the Way while teaching for DCPA Education.

When Artistic Director Chris Coleman recently asked Powell to direct A Christmas Carol for the first time, Powell said, “It was like the cartoon where the jaw drops and hits the table. I was shocked but thrilled because I love this story and this company so much.”

This year will mark the Denver Center’s 27th not-quite annual staging of A Christmas Carol, which Powell is dedicating to the legendary Laird Williamson, who died in 2020. The Denver Center’s holiday tradition began in 1990 with an adaptation written by Williamson and Dennis Powers. In 2005, the company switched to the current version written by Richard Hellesen and David de Berry.

Williamson was a seminal figure in Denver Center history, directing more than 40 plays from 1981-2005, including 14 stagings of A Christmas Carol. Powell had never seen A Christmas Carol as a live play until he came to work at the Denver Center in 1990. “It really blew my mind what a live audience experiencing that story together in community means, and how different that is from watching a film,” he said.

DCPA Theatre Company productions directed by Anthony Powell
From top to bottom: Lord of the Flies, Death of a Salesman, All The Way 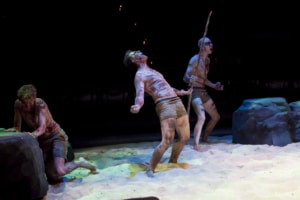 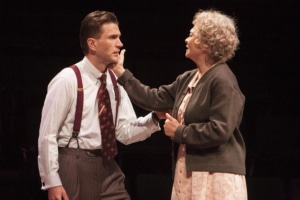 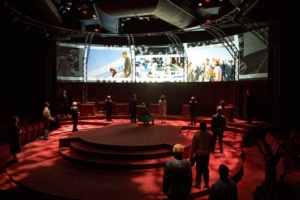 What has stayed with him as much as anything else, he added, was Williamson’s opening-night address reminding the cast and crew that Scrooge’s redemption is indelibly tied to the winter solstice and its promise of new beginnings, longer days and more sunlight.

A Christmas Carol at the DCPA

“That speech stayed the same every year, and it would choke me up every time,” Powell said. “He would talk about how Scrooge’s heart had become frozen and that he had locked himself away from what he called ‘the sunshine of the spirit,’ which is an expression I dearly love. Laird would talk about how our tradition of putting up holiday lights and lighting fires is all about bringing the light back in the darkest days of winter – and that is literally what happens to Scrooge.

“Then Laird would read aloud the lyrics to George Harrison’s song ‘Here Comes the Sun’ – and I don’t care how big a cynic you might be, I defy you to listen to that song from that context and not get choked up. I’ve never heard that song since without thinking of Laird.” 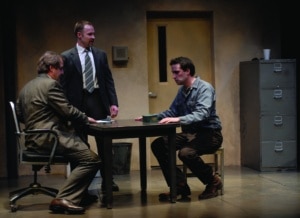 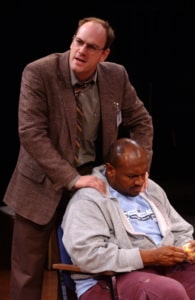 Powell is humbled, resolute, reverential and a little bit daunted about not only returning to the Denver Center’s seasonal tradition, but assuming the overall direction of it. He knows what this production has meant to the company and to the community over the years.

At its current pace, A Christmas Carol is within about two years of crossing the 1 million attendance threshold. In that time, 10 actors have played Scrooge and 20 have played (God-bless-him) Tiny Tim. The production has employed hundreds of actors and many more backstage. Each production requires 108 costumes and 588 light cues.

Powell is only the fourth director ever to helm a Denver Center production of A Christmas Carol, following four years by Melissa Rain Anderson. Powell likens his new role to that of a train conductor keeping a locomotive on track it has been riding for decades. It is a train, Powell adds with a laugh, that one should not get in the way of.

“A big part of my job is to really be a good steward, because this is not only already both a wonderful production and a great adaptation of the play, but we also inherit that incredible set designed by Vicki Smith and Kevin Copenhaver’s marvelous costumes,” he said.

Powell does not plan big changes to the show. “I don’t think audiences will be shocked,” he said. But regular visitors will be at least somewhat surprised, he admitted, because they will be seeing only a handful of familiar faces in recurring roles. 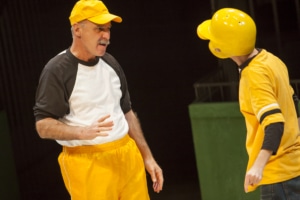 Timothy McCracken, the most recent actor to play Scrooge, is now playing Bob Cratchit. Shabazz Green, who played Cord in the DCPA’s nearly all African American production of Oklahoma!, is the new Mr. Fezziwig. Emily Van Fleet, who starred for Off-Center in the Jazz Age musical The Wild Party, is the new Mrs. Fezziwig.

The new Scrooge is none other than Michael Santo, who will be making his 14th appearance in a mainstage DCPA Theatre Company production dating back to 1992, most recently in Jackie & Me and All the Way.

“For Scrooge, you need to find an actor who can play both the beginning of the show, which is Scrooge as a frozen-hearted miser, as well as the redemption and being reborn at the end,” Powell said. “Michael is an actor’s actor and a delightful human being. He’s also got a lovely sense of humor, and that is so important because Scrooge may be an old meanie but I think he enjoys psyching people out. Michael is a great tragedian and a great comedian.” 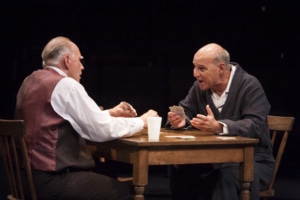 Mike Hartman and Michael Santo in Death of a Salesman. Photo by Jennifer M Koskinen

Powell knows how the story ends, of course – and chances are you do, too. But he’s approached its creation as if he doesn’t. He wants to maintain an innocence to the storytelling, knowing full well that people need the replenishment this fable offers, especially coming out of the pandemic.

“The last few years, every single person on planet Earth has been through a lot, and one senses that the world is getting meaner by the second,” he said. “At the risk of sounding incredibly corny, I think this is a story we need right now more than ever because kindness is a muscle you have to exercise. This is a story that illustrates in a beautiful way what it means to be a human being.

“It’s like Fred says: ‘There are many things, uncle, which may be good without being profitable, and I dare say Christmas is one. It’s the only time I know of in the whole long year when we open our hearts freely, and think of the people around us as fellow passengers through this life – not some strange race of creatures bound on separate journeys.’

“We are not alone,” Powell added. “We have got to do this thing called life together.”