THE OTHER JOSH COHEN

Nominated for six Drama Desk Awards and the Lortel Award for Outstanding Musical, this hilarious, endearing and hummable musical was hailed by Jesse Green of The New York Times as “a spontaneously charming musical that is just right for right now.”

Enter the quirky world of Josh Cohen’s New York City apartment… as it is getting robbed. Thus begins the hilarious rock-and-roll romantic comedy about good guy Josh, caught in a lifelong battle with bad luck. Broke and alone, all hope seems lost – until a mysterious letter arrives that changes his life forever. Two actors play the hapless-yet-warmhearted title character – one eventful year apart – in a 90-minute life-changing laugh-fest that will leave you feeling better about the world.

The Garner Galleria bar will be open before each performance and you may take drinks into the theatre. Cocktail service will not be available during the show.

THE OTHER JOSH COHEN DOWNLOADABLE VALENTINES

Want to show that special someone how much you care? Send them one of these great e-Valentines! 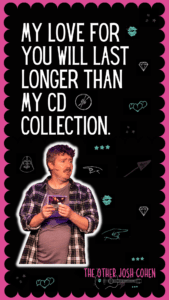 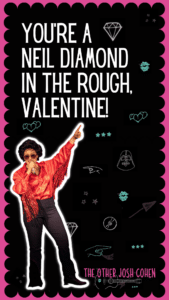 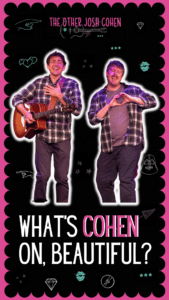