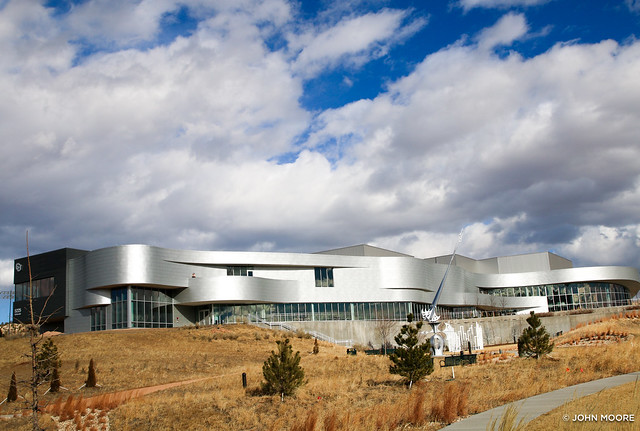 Photos from the opening of the $70 million Ent Center for the Arts on the University of Colorado Colorado Springs campus. To see more, click on the image above to be taken to our full gallery of photos. Photos by John Moore for the DCPA NewsCenter.

New home for students, arts groups, artists and residents is in many ways the new gateway to Colorado Springs

COLORADO SPRINGS — It took 40 years to bring the $70 million Ent Center for the Arts to life. But it took no more than the opening of its doors this month to forever transform the cultural life of Colorado Springs and the surrounding Pikes Peak region.

“A year from now, the assumption is going to be that if something is happening in Colorado Springs, then it is probably happening here,” said Drew Martorella, executive director of UCCS Presents, which will manage the 92,000 square-foot home to music, dance, theatre, film, art, academia and more in a perhaps unprecedented public-private partnership. “We have staked our claim to being a nexus for the arts in Colorado Springs.”

This is not just a game-changer. “It’s the beginning of  whole new game,” said Kevin Landis, associate professor of theatre at the University of Colorado-Colorado Springs that now houses the stunning, silvery arts center that was built on a slope of grassland along I-25 at Nevada Avenue to be a new home for students, community nonprofit arts groups, world-class artists and the people of Colorado Springs. It is the new gateway to the college and, in many ways, to the city itself.

And while the Ent Center was just four years under construction, it truly was four decades in the making. Back to when the legendary Murray Ross, who died a year ago, was first hired at the university.

The story goes, as Martorella tells it, “that when Murray was hired to come here from Rochester (N.Y.), he wrote a letter to a friend that said: ‘I’ve accepted a job to teach English and run a theatre program at the university in Colorado Springs. They don’t have much in the way of facilities right now — but they have assured me they will build me one in the very near future.’ ” Gala image above by Tom Kimmell.

The Ent Center that was christened at a massive gala on Feb. 3 features a dramatic metal skin that complements the wave-like clouds that form when air moves over the nearby Rockies. Imagine the Denver Art Museum — with gentler curves. For anyone driving along I-25, there will be no missing the Ent Center. And that’s on purpose.

“The client was not shy about wanting the building to stand out,” architect Chris Wineman of Semple-Brown Design told The Colorado Springs Gazette. “They told us, ‘We want people to know where to find it. Let’s stretch the boundaries.’ ”

The Ent Center instantly becomes perhaps the defining architectural marker of the state’s second-largest city. Two giant silver sculptures dominate the outer grounds, one perhaps a Phoenix, the other akin to a weather vane. The pieces are borrowed from the family of the late Starr Kempf, a bold, Colorado Springs artist known for his graceful steel wind kinetic sculptures. They were left in his backyard following the artist’s suicide in 1995, and the Ent Center staff asked the family for a two-year loan. “They just respond to the environment in a beautiful way, and their enormous scale just seems to complement the building in a really nice way,” Martorella said.

The Ent Center rests on the trailhead for the Pikes Peak Greenway Trail. A handy walkway leads pedestrians under the highway to the sprawling University Village that is quickly turning the surrounding area into an entertainment district.

But it’s what’s inside the Ent Center that is truly transforming Colorado Springs. It features four major performance spaces, an art gallery, and houses the university’s entire music, theatre and dance programs. The Ent Center, which from inside glass walls provides spectacular views of the Rockies from several vantage points, will soon be home to an array of Colorado Springs arts groups of varying sizes and budgets. The major presenter will UCCS Presents, whose programming  includes TheatreWorks (the professional theatre company founded by Ross), the Gallery of Contemporary Art (GOCA), and a new dance and music series that debuts this month under the guidance of Aisha Ahmad-Post, who was hired away from The New York Public Library’s flagship cultural series to be the Ent Center’s first director. The series opened Feb. 10 with Keigwin + Company, a contemporary dance company, and acclaimed pianist Seong-Jin Cho in concert Feb. 28.

“With more than 160 productions already scheduled this spring, ranging from student shows to performances by regional arts organizations and even nationally acclaimed artists, we’re hitting the ground running and look forward to welcoming the community into the Ent Center for this incredible inaugural season,” Ahmad-Post said.

Here is a quick rundown of the facilities by size and scope:

• Shockley-Zalabak Theater, 786 seats: “This is the new home for the arts in Colorado Springs,” Martorella said of the flagship theatre with a dance-friendly white oak sprung floor, and named for Pam Shockley-Zalabak, the chancellor emerita largely responsible for the construction of the Ent Center. “We already have two 2,000-seat theatres in Colorado Springs, but what we don’t have is a medium-sized theatre,” he said. “And we have lots of non-profit performing arts groups that have no place to call home. Places like the Chamber Orchestra of the Springs and the Colorado Springs Children’s Chorale have performances throughout the year but they have to fight to find space and often end up performing at a church or a high-school auditorium.” This will be their new home.” • Dusty Loo Bon Vivant Theatre, up to 300 seats on two levels: This imminently flexible space will allow TheatreWorks to accommodate about 20 percent more audiences for any given show than it could in its previous space (with the same name) on the opposite side of the campus. “Murray Ross basically designed this space before he died,” Martorella said. “It is a scaled-down version of the Dorfman Theatre in London.” In addition to a second, mezzanine seating level, actors and set pieces now can ascend from below the stage for the first time, and they can go about 10 feet higher as well. The theatre officially opens tonight (Feb. 15) with a multi-ethnic staging of Oklahoma! More on that, with a complete cast list, at the end of this report.

• Chapman Foundations Recital Hall, 250 seats: There is not going to be a finer place to listen to classical music or any kind on non-amplified music than this hall, Martorella boasts. “Acoustically, this room is perfect,” he said. It can also serve as a cinema.

• Osborne Theatre, flexible up to 100 seats: While students often participate in TheatreWorks productions, that is a professional theatre and a destination for leading actors and artists across the state. The Osborne (also retaining its former name) will again be an exclusive home for college productions. “Only it’s about 100 times better,” Martorella said.

• In addition: The Ent Center also includes rehearsal rooms, acoustically sealed music classrooms, a recording studio, the Murray and Betty Ross public lobby, Pinney’s Cafe (named after beloved local actor Bob Pinney), a dance and movement studio, and the Crow’s Nest rehearsal studio for TheatreWorks. That room was made possible by a gift from Williams College Class of 1963 — 16 remarkable former classmates of Murray Ross’ who stayed in touch after college for 40 years and recently visited Colorado Springs to remember him. On the wall hangs a framed piece of art crafted by Ross’ wife, Betty, comprised of seemingly random Murray Ross personal artifacts such as a credit card ripped into pieces. It is called The Crow’s Nest because Ross’ nickname in college was The Crow. All of the performance areas share a common backstage area that the architects modeled after the “Green Room” in the Denver Center’s Helen Bonfils Theatre Complex. The architects also headed the recenr renovation of the DCPA’s Space Theatre.

The Ent Center is similar to the Arvada Center in size and somewhat akin to the Newman Center at the University of Denver in terms of its partnership with a local college. But the Ent Center stands alone because of its associations with the surrounding cultural community.

“I can’t think of a lot of equivalents in the entire county,” Landis said. “Not just in Colorado. Anywhere.” It’s a brand-new era for students attending the University of Colorado-Colorado Springs, as well. The second floor of the Ent Center is home for all of the college’s arts programs.

“For our students, it’s just not comparable,” Landis said of the change. “We went from a converted office building where we were securing things with duct tape and a prayer to spaces in which the technology is advanced beyond anything we have ever had before. Think about it this way: We have professionals all over our classrooms. But now we have professionals all over this building — and now students can walk right downstairs and intersect with those professionals. I don’t see that happening anywhere else. Murray Ross’ dream for a new home for TheatreWorks officially comes true tonight (Feb. 15) with the opening of Oklahoma! in the new Bon Vivant Theatre. It will be bittersweet given that Ross was intended to direct the production.

“Murray was not a musical theatre person,” Martorella said. “The only reason we are doing Oklahoma! is because many years ago, Murray and I became enchanted by a spare production of Carousel we saw at the Living Room Theatre in Kansas City, which only seated about 75. We loved seeing big musicals in small spaces, and we marinated on Oklahoma! for years. We finally decided this was the time to do it.”

After Ross died, Martorella reached out to Kyle Hatley, who directed that Kansas City production of Carousel years before. And he said yes to directing Oklahoma!

Many in Colorado Springs have been speculating what Ross would think of the Ent Center, and the blowout party that marked its opening on Feb. 3. “I just know he would have been glowing,” Landis said, “because Murray had that childlike persona that made him such an infectious force in the arts. I think he would have been just over the moon about this.”

And, Martorella added with a laugh … “he would have notes. Because Murray always said, ‘There is no such thing as perfection. And there is always more work to be done.’ ”


Regional performing arts and cultural organizations that will use the Ent Center for the Arts to varying degrees include:

Where the money came from:

The building budget for the Ent Center was $60 million, plus $10 million in infrastructure for a total project of $70 million. Here’s how it was paid for:

Also this weekend: Oskar Eustis and Jeanine Tesori
One reason Kevin Landis won a 2017 True West Award for “Prologue,” a series of theatre conversations with prominent members of the national theatre community. At 2 p.m. Sunday, Feb. 18, he will welcome Oskar Eustis and Jeanine Tesori to talk about Fun Home, They’ll talk about will the state of American theatre and the creation of new work just as Fun Home is about to open at the Colorado Springs Fine Arts Center at Colorado College next month. Go to uccspresents.org to register.