Sara Sachs summed up the vibe of the Bobby G Awards on May 26 when she accepted the award for Outstanding Scenic Design on behalf of the team from Overland’s Sister Act.

“The real Bobby G Award is the friends you make along the way,” Sachs said to a cheering crowd of about 2,000 at the Ellie Caulkins Opera House. 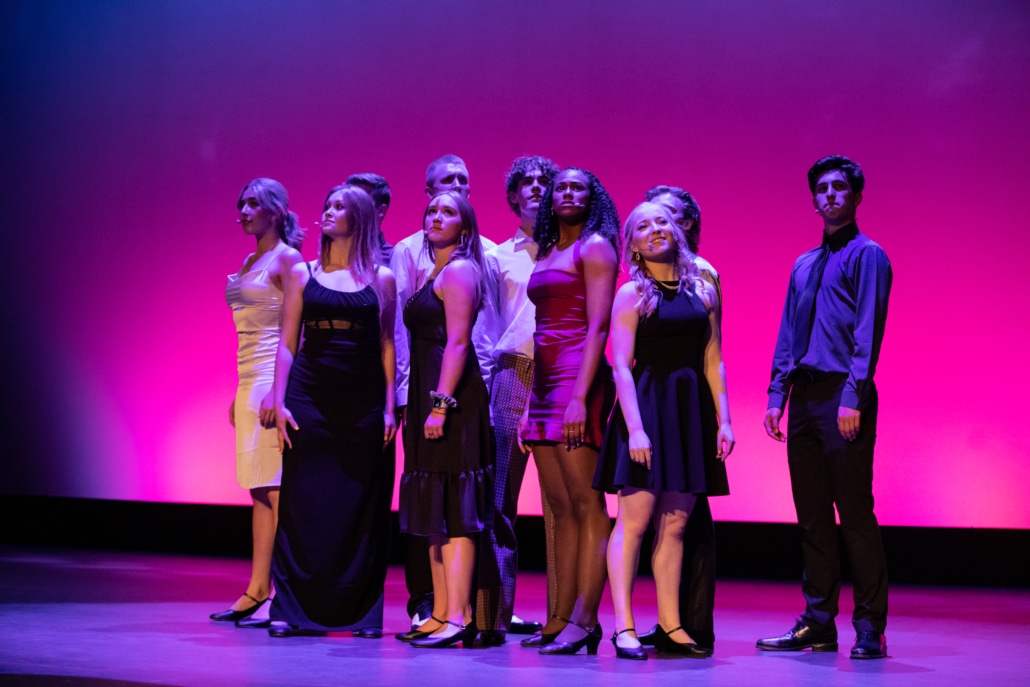 The Lead Actor and Actress Medley. Photo by McLeod9 Creative.

The Bobby G Awards, which celebrate achievements in high-school musical theatre, are essentially the Colorado state championships for student thespians. Only at the end of this night, schools from all over the state dance off the field as champions. The 2021-22 winners were spread out from Denver to Grand Junction to Pueblo to Palisade to Glenwood Springs with 10 of the 19 awards going to schools from outside the Denver metro area and five to schools participating in the program for the first time. 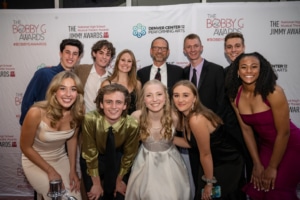 The Bobby G Awards are a year-long program administered by the Denver Center for the Performing Arts’ Education department, but this was the first time the awards were held in person in three years. John Ekeberg, Executive Director of Denver Center Broadway, remarked on just how energizing and inspiring it was to have all the schools and their students in the same building again, dancing, singing, shrieking and celebrating each other’s accomplishments.

“I just want to take a moment and soak it all in, frankly,” he said.

Aurora’s Overland High School took the top prize, with its production of Sister Act named Outstanding Musical. In doing so, Overland became the eighth different school to win that category in the eight times the awards have been administered since 2013. In the true spirit of sportsmanship, faculty Director Andy Ray, at his moment of triumph, deferred to school thespian club president Kaila Nghiem to accept the award on the school’s behalf. 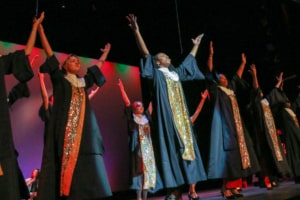 “Overland theatre is a special, unique place that many of us call home,” Nghiem said. Outside, Overland senior Ibrahim Souare added, “We at ‘The O’ are extremely proud to represent our community and our school at this great event, just to show who we are and that we’ve got what it takes.”

It was also a huge night for Pueblo County High School, whose production of Zombie Prom matched Overland with three awards in its first year participating in the program.

The Bobby G Awards emphasizes camaraderie and shared experiences over the competitive aspects of the year-long program, with all five schools nominated for Outstanding Musical invited to perform songs from their shows to raucous and supportive cheers. The other schools nominated were Chaparral (9 to 5, the Musical); Lakewood (Anastasia); Littleton (Into the Woods); and Palmer Ridge High School (Once Upon a Mattress).

Palmer Ridge High School Director Christy Inama summed up the euphoria many were feeling that night when her school won for Outstanding Choreography.  “We are on such a validation high right now,” she said to laughter and applause. 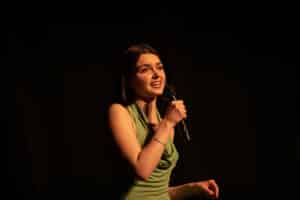 Each year, the 10 nominated Outstanding Actors and Actresses are invited to the Denver Center two weeks before the awards ceremony to prepare an original medley together in community and friendship, which they then perform at the ceremony. This year’s nominees were  joined by 2019 Outstanding Actress winner Abby Linderman for what has become an annual performance ritual created anew each year by Denver Center Education Coordinator Claudia Carson.

“When we first started rehearsals, I was not expecting to create such close bonds in such a short amount of time – and the polar opposite is what happened,” said Outstanding Actress nominee Olivia Schwab, who played Doralee in Chaparral High School’s 9 to 5 The Musical.  “We got so close, so quickly. I know that we are all going to remain friends because, at this point, it would just be too devastating to say goodbye.”

But there is also much at stake at the Bobby G Awards. The students named Outstanding Actor and Actress are invited to represent Colorado at The National High School Musical Theatre Awards (also known as “The Jimmys”) on June 27 at the Minskoff Theatre in New York City. There, students advancing from regional competitions all over the country participate in a 10-day series of intensive classes and workshops with Broadway actors, directors and designers leading up to the national awards ceremony. 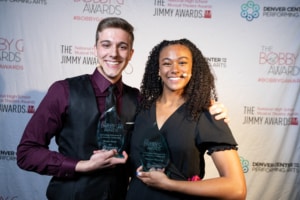 This year’s Bobby G Awards honorees are Thomas Beeker, who played Harold Hill in Frederick High School’s The Music Man, and Madison Manning, who played Deloris Van Cartier in Overland’s Sister Act. But while Manning said she was honored to named Outstanding Actress, she will be unable to attend the Jimmy Awards – and for good reason. At the same time, she will be representing Colorado in the national finals of the Distinguished Young Women Scholarship competition in Montgomery, Ala. That’s a program that awards more than $1 million in tuition and scholarships annually. Instead, fellow outstanding Actress nominee Ella Plourde, who played the Dowager Empress in Valor Christian High School’s Anastasia, will represent Colorado at The Jimmy Awards.

In her Bobby G Awards acceptance, Manning thanked all who have pushed her to do her best but also took a moment to acknowledge the bittersweet context of the evening, coming just two days after the mass shooting at a school in Texas.

“It is definitely a privilege to be able to gather together and celebrate theatre and community with all of the devastation happening in Texas,” she said. “It’s brutal to know that right now, they don’t feel like they have a safe community in Uvalde, when we are so blessed to have one here. The fact that we are able to enjoy this night together is truly amazing.” 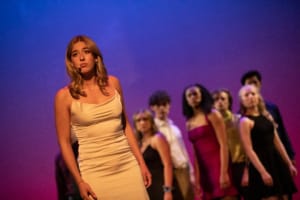 Ella Plourde and the Lead Actor and Actress nominees. Photo by McLeod9 Creative.

Winners of this year’s Bobby G Awards were determined by a team of local adjudicators who considered musical productions from 41 Colorado high schools in 18 counties, most of which also took part in workshops conducted by DCPA Teaching Artists.

One of those adjudicators was Candy Brown, who has appeared in four iconic Broadway musicals, including the original cast of Pippin. Brown, who now teaches at Denver School of the Arts, said that when she first heard the DCPA was creating an awards program for high-school theatre back in 2013, “I just thought it was one of the most phenomenal things I had ever heard of. It’s terrific.”

The Bobby G Awards were founded in 2013 by the late DCPA President Randy Weeks. They  are named after late producer Robert Garner, who established Denver as a top destination for touring Broadway shows. Ekeberg said the program “is an experience like nothing else that we do … and it is the basis for everything that we do, which is supporting the value of storytelling in the theatre with educating and connecting with the community. The Bobby G Awards brings all of those things together, and not just for one night. This is really a year-round program that only culminates tonight.” 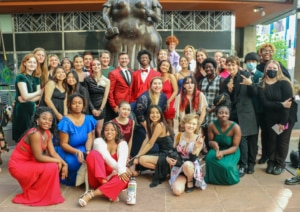 In all, about 3,500 students participated in some aspect of the program this past school year, and officials say that number is closer to 32,000 since the first awards in 2013. Winners of the Outstanding Supporting Actor, Actress and Rising Star awards earn a full year of free classes from Denver Center Education.

There was a heightened energy with the awards coming back as an in-person event after three years of pandemic hiatus. “We are so grateful to be here this year, especially after COVID,” said Cherry Creek High School student Hayden Noe. “It is just so amazing to be able to make art again and to see everybody here with that same goal.”

Allison Watrous, Executive Director of DCPA Education & Community Engagement, acknowledged the many challenges students and teachers have faced these past two years. “But through it all, we knew there would come a time when the musicals would be back,” she said. “Your talent and your accomplishments are the hope that we all needed during this time.”

Brown congratulated the students for their resilience through the pandemic years. “May I please encourage you to hang on to that resilience,” she told them. “That grit will serve you as you travel whatever path you choose.” 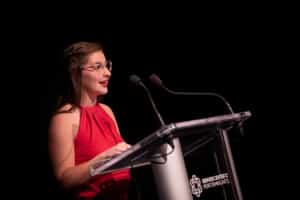 Tyler Cox, who was nominated for Outstanding Actor for his portrayal of Seymour in Windsor High School’s Little Shop of Horrors, said the Bobby G Awards serve as powerful motivation for younger students. “Getting this opportunity to connect with so many other people who are telling these stories across the state is really inspiring,” he said, “and I think that not only will give younger actors something to work toward but also open their eyes as to what is possible.”

Three special awards are given each year that defy categories. Appropriately, two of those awards acknowledged efforts that are responding to changes in our understanding of identity. Isabel Anderson, a student who designed and built the costumes for Fort Collins High School’s Annie, talked with pride about costuming for a transgender student for the first time, a person who has played both male and female roles at the school.

The host of this year’s ceremony was Abigail Brooks (Lehrer), who won the 2018 Outstanding Lead Actress award for her portrayal of Eponine in Les Misérables for Castle View High School, and most recently competed in the 20th season of American Idol. Linderman is under contract to perform in the summer season for the New London Barn Playhouse in New London, N.H. 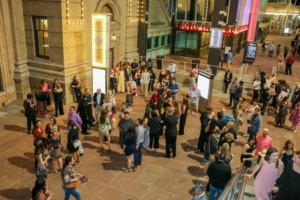 “I remain so incredibly grateful for my experience with the Bobby G Awards and for the impact the Denver Center’s education program has had on me as a whole,” said Linderman. Kyler Hershman, her classmate at Valor Christian High School and winner of the 2019 Outstanding Actor award, could not attend because he is part of the national touring company of An Officer and a Gentleman, where, on May 2, he went on as an understudy to play the lead role of Zach Mayo.

Alex Burkart, Director of Theatre at Cherry Creek High School, put it simply: “These kids are the future of theatre in the country and the world.”

At the end of the night, students, family and friends surrounded Talia Liccardello, who was nominated for the third time for her direction of Littleton High School’s Into the Woods, and won for the first time.

“It feels good,” she said. “I want people to know theatre is hard work, but it is so worth it.”

NOTE ON THE NOMINATIONS: Nominees are determined by scoring from a team of professional adjudicators who offer each school detailed, constructive feedback. Unlike other awards categories, the Outstanding Actor and Actress winners are determined by two equally scored criteria: First, the students are judged for their actual performances in their respective school musicals. The five students with the highest scores then go before a professional panel for a private, scored audition.

Outstanding Overall Production of a Musical

Outstanding Performance by an Actor in a Supporting Role (tie)

Outstanding Performance by an Orchestra