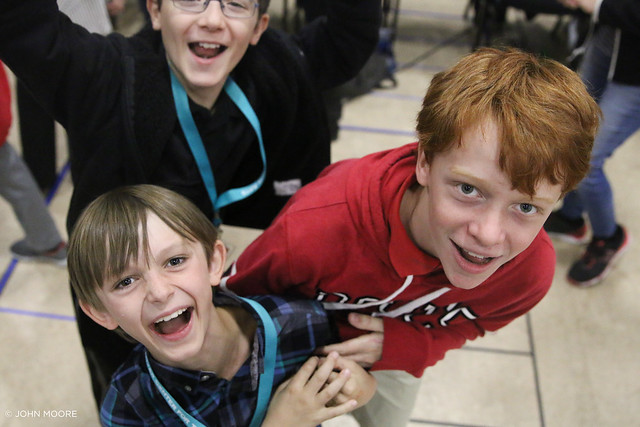 Above: Photos from the first day of rehearsal for the DCPA Theatre Company’s ‘A Christmas Carol’ last week. To see more, hover your cursor over the image above and click the forward arrow that appears. Photos by John Moore for the DCPA NewsCenter.

Favorite Sam Gregory is back as Scrooge and, for the first time in Denver, a young girl has been cast to play Tiny Tim.

When the DCPA Theatre Company presents the seasonal favorite A Christmas Carol later this month, it will be an offering filled with mistletoe and milestones. Check out the five things we learned at first rehearsal below.

The cast is again headed by Sam Gregory in his second season playing the miserly Scrooge. The most veteran member of the cast is Leslie O’Carroll, who has appeared in 19 of the Denver Center’s 25 stagings, most as Mrs. Fezziwig.

Back for her second year as director is Melissa Rain Anderson. She will again be staging the version adapted by Richard Hellesen, with music by the late David de Berry, as has been the DCPA tradition since 2006. “This is by far my favorite version,” said Anderson, who has herself performed in this version of the story four times as an actor at theatres around the country. “I think it’s the most Dickensian.” Music Director Gregg Coffin has helmed this version of the show 22 times around the country.

LOOK WHO’S TWENTY-FIVE! A Christmas Carol is, no surprise, far and away the DCPA Theatre Company’s most-produced show. This holiday season marks the company’s 25th presentation of the story dating to 1990 — having taken two years off along the way in favor of Irving Berlin’s White Christmas. “That is a huge milestone,” Anderson said. “It’s a privilege to be a part of that legacy here at the Denver Center. With everything that is happening in the world, I am so happy to be in this room with all of these people and to be a part of telling this tale again as a true ensemble.”

GOD BLESS THE GIRL. There have been 18 young Tiny Tims over the DCPA’s first 24 years of A Christmas Carols. This year, for the first time, the role of the feeble boy whose death is imminent if Scrooge doesn’t break down and finally offer his employee some health insurance, will be played by a girl. Anderson she credits DCPA Artistic Associate Grady Soapes with the idea to cast young Peyton Goosen. “I am always open to more females on the stage, so I was very for it,” Anderson said. “Peyton is really smart, she is absolutely adorable and she is precocious. But most important, she was the best actor for the role.”

KNOCK KNOCK. WHO’S THERE? A Christmas Carol has drawn 820,000 audience members since 1990, so if you live in Denver, chances are, you have seen it. But with 10,000 new residents moving into the city every month, it’s become clear that thousands of audience members each year are experiencing A Christmas Carol for the first time “So many people love this production and count on it as a family tradition, but 40 percent of our A Christmas Carol audiences are new every year,” said DCPA Associate Artistic Director Charlie Miller.

SHE’S MIXING THINGS UP. Anderson introduced several changes last year, including, for example, introducing a grander sleigh for the Ghost of Christmas Present to ride in on. This year, she says audiences should keep an eye on the phantoms. “Their costumes are a little sleeker this year,” Anderson said. “We are going to be able to see their bodies a little more, which I really like, because we have a really good dancers in our cast. I would like for people to see that they were once human.”

WHO KNEW? Speaking of the creative vision, one of the most reliable aspects of the DCPA’s production from year to year is the look of the set, originally designed by veteran Vicki Smith. We learned at first rehearsal that Smith’s original inspiration was a Victorian Christmas card she came across.

The SantaLand Diaries: Back for Year 9

Around the corner in the Jones Theatre, Off-Center’s seasonal co-production of The SantaLand Diaries again will be staged in partnership with the Boulder Ensemble Theatre Company. The production will be essentially unchanged for 2017, with Michael Bouchard again donning the caustic candy-striped socks for a third time in David Sedaris’ comic monologue recounting his real-life experience working as a Macy’s Department store elf.

Bouchard is a Denver Post Ovation Award-winning actor best-known to Colorado audiences from his time at the Arvada Center, the Creede Repertory Theatre and the Boulder Ensemble Theatre Company. Luke Sorge will again serve as “Other David.”

This will be Boulder Ensemble Theatre Company‘s ninth annual holiday staging of The SantaLand Diaries, and the fourth since it moved to the DCPA’s Jones Theatre. The director is again Stephen Weitz, who directed the DCPA Theatre Company’s Tribes.

At a glance: David Sedaris’ off-beat tales from his stint as a Macy’s elf in New York City is the sure cure for the common Christmas show. DCPA's 'A Christmas Carol' undergoes its own rebirth
0 replies