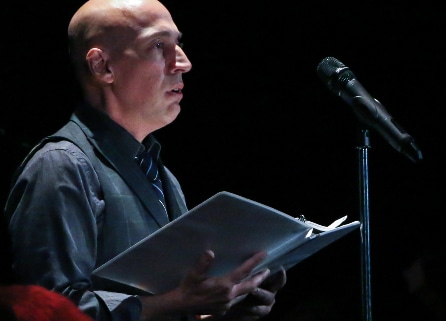 ‘The Laramie Project’ reading at BDT Stage on October 8. Photo by John Moore. Click here to see a complete gallery of photos from the night.

The fence is long gone. But the image is forever seared into memories like a brand on cattle: A near-dead college student, his flesh so beaten, bloodied and intertwined with cord that the first passers-by mistook him for a scarecrow.

Not an image you can tear down as easily as a fence.

And yet, the curious still venture to the outskirts of Laramie, looking for the spot where 21-year-old University of Wyoming student Matthew Shepard was robbed, pistol-whipped, tortured and left to die — many believe, because he was gay.

Twenty years later, Wyoming remains one of only five states without a single hate-crime statute. The Matthew Shepard Foundation estimates that 61 percent of all hate crimes are not reported to police. And in just one more year, Matthew Shepard will have been dead as long as he was alive.

Two decades after the hate crime that galvanized the nation and thousands more around the globe, the country is extraordinarily fragmented across inter-group lines. Americans are bitterly divided both in their homes and in voting booths. They are more polarized in their beliefs on social issues, and more deeply cocooned from those with opposing views.

No better time, says BDT Stage Producer Michael J. Duran, to return to the scene of the crime. Not simply to relive the savage atrocity but to consider the remarkable dialogue that took place when Moisés Kaufman and the Tectonic Theater Project descended on Laramie a month after the killing, conducted interviews with dozens of its residents and turned what they said into the DCPA Theatre Company’s seminal world-premiere play The Laramie Project.

BDT Stage is one of at least three Colorado theatre organizations that are marking the 20th anniversary of the October 12, 1998, murder of Matthew Shepard with various public gatherings this month. Duran has assembled some of the area’s top actors, including the DCPA’s Sam Gregory (A Christmas Carol) and Wayne Kennedy (The Constant Wife) alongside journalists Chris Parente, Greg Moody and Eden Lane, among many others, to read The Laramie Project on Monday, October 8, with proceeds benefiting three area nonprofits.

Photo coverage: Our best photos from the BDT Stage reading of The Laramie Project

“In light of the current political climate, at a time when hate crimes are up 12 percent from last year, and when hate rhetoric is so prevalent, it just felt like we needed to stand up as artists and say something,” said Duran. The Laramie Project, which premiered in the DCPA’s Ricketson Theatre in February 2000 and since has been staged in theatres and schools around the world, used interviews and courtroom transcripts to provide a wrenching window into the impact the murder had on the small university town of Laramie 125 miles due north of Denver. The play builds to a shocking moment of forgiveness when Shepard’s father, Dennis, is asked by a judge to weigh in on the sentencing of co-defendant Aaron McKinney: “I give you life,” Dennis Shepard tells McKinney, “in the memory of one who no longer lives.”

That speech, Duran said, “is the whole reason for doing this now.”

Andy Paris in The DCPA Theatre Company’s in 2000. ‘The Laramie Project’ Photo by Dan McNeil.

Elsewhere, The Theatre Company of Lafayette is fully staging The Laramie Project from October 5-14. And on October 7 in Fort Collins, a touring, Texas-based choral ensemble called Conspirare will present Artistic Director Craig Hella Johnson’s compassionate musical response to the Shepard murder. His three-part fusion oratorio, which was made into an album that received a Grammy nomination, incorporates a variety of musical styles. The Washington Post called the impact of the work “immediate, profound and, at times, overwhelming.”

The Laramie Project was made into a 2002 HBO film and, to mark 10 years, Kaufman and his team produced a new epilogue that was read by more than 150 theatre companies on October 12, 2008. One such gathering, which included the governors of Colorado and Wyoming, was conceived by Stephen Seifert and directed by Rick Barbour at the University of Denver. The Laramie Project: 10 Years Later included a chilling new interview with McKinney in which he bluntly told Tectonic company member Greg Pierotti that “Matt Shepard needed killing. I don’t have any remorse. The night I did it, I did have hatred for homosexuals.” Denver School of the Arts staged ‘The Laramie Project,’ directed by DCPA Director of Education Allison Watrous, in 2015. Photo by Chris Howard.

Barbour, not coincidentally, had been the Production Manager on the world-premiere staging of The Laramie Project for the DCPA Theatre Company.

At first, Barbour remembers thinking The Laramie Project was not much more than an interesting theatrical experiment these visiting artists from New York were putting together in a DCPA rehearsal studio. It was a very different kind of creative process, he said, watching Tectonic company members cobble their interviews and transcripts into a theatrical production that would rely mostly on the actors directly addressing the audience.

“We have hosted lots of guest artists from other places over the years,” said Barbour, now an Associate Professor in the University of Denver Theatre Department. “They were just doing their thing and we didn’t know what was going to come out of it.”

But as the opening approached, Barbour remembers realizing, “This is beautiful and extraordinary in its simplicity. I loved that it gave you this entire community of people from cops to cowboys to clergy testifying to what they saw and felt. And I loved that it was based on the actual words of actual people who had suffered a double whammy to their community: First, this hideous trauma that took place in their town, and then the media tsunami that followed it.”

Barbour saw first-hand what happened when Denver Center audiences, many with a direct connection to Laramie or the murder, first saw the play in 2000.

‘The Laramie Project: Ten Years Later’ was presented at the University of Denver in 2008.

“They experienced the unmistakable truth of how that murder affected people’s lives,” said Barbour, whose next assignment will be directing Lauren Gunderson’s Miss Bennet: Christmas at Pemberley this December for the Boulder Ensemble Theatre Company. “Theatre can do that, and when it happens, it is really powerful. Theatre gives us a chance for catharsis. When you solicit and honor multiple voices from the community by allowing them to talk about what this tragedy meant to them, that gives a strong invitation to everyone in the audience to empathize with what happened.”

And Barbour says we need the kind of dialogue Duran will be offering on Monday in Boulder more than ever.

From 2000: Playbill announces Denver Center premiere of The Laramie Project

“We’re living right now in such a completely fractured series of echo chambers that people are vigilantly protecting and not wanting to step out of,” Barbour said. “Events like The Laramie Project give us an opportunity to deal with trauma in a roomful of people who don’t necessarily feel the same way we do.”

And they not only keep Shepard’s memory alive, Barbour said. They honor other victims as well. “I’m not sure that Matthew’s horrible death is necessarily any more significant than the thousands of others who have suffered wrongful and tragic deaths as well,” Barbour said. “This one just received more attention. The question that haunts me about Matthew Shepard’s murder is that what happened to him has happened to so many others. And so to me, this play isn’t only about this particular, single event. It’s about all of them.”

What The Laramie Project is not, said Nanci Van Fleet, director of Theatre Company of Lafayette’s upcoming staging, is ancient history.

“The Laramie Project is about the murder of Matthew Shepard, who was murdered because of his sexuality. And in our political climate, the important message of this play is just as relevant today,” Van Fleet said. “This play explores the depths to which humanity can sink – and the heights of compassion that humans are capable of.”


The Laramie Project in Lafayette


The Laramie Project: A Community Reading in Boulder