Video: Your first look at The Improvised Shakespeare Company®

How a single audience suggestion leads to improv comedy gold that is equal parts silly, sharp and impressively stupid

The Improvised Shakespeare Company may be the smartest dumb show you will ever see. Or the dumbest smart show. What-thee-ever. Either works for founder Blaine Swen, whose remarkable ensemble of improv comedians make up a fully improvised Shakespearean masterpiece every night. From scratch. In rhyme. Without the help of sets or props. And they do it so effortlessly, audiences sometimes can’t believe it’s not fixed. Swen swears it’s not.

“Nothing is planned out, rehearsed or written,” said Swen, whose rotating cast of Chicago-trained players has presented the opening — and closing — performances of more than 1,000 plays since 2005, each inspired by one single audience suggestion: The title of a play yet to be written. One night last year, while the company was first visiting the Denver Center’s Galleria Theatre, the offered title was the tragically short-lived classic The Existential Nostril. You know: That old yarn about the dimwitted Greek who follows his heart to the biathlon and almost drowns, is targeted by bad guys wearing stolen human skins and ultimately learns that in order to find love, he must first learn to love himself.

You know … that one?

Along the way that Denver audience (and that audience alone) met characters named MegaKnightus and Calpurnia Joan Ajax. Characters who used big words like defenestrate (to throw a person out of a window) and fundament (a cheeky euphemism for your buttocks). They watched in awe as the actors told their spontaneous story both through the use of extended metaphors — sometimes even approximating iambic pentameter.

You have to be smart to pull off a play as dumb as The Existential Nostril. How smart? Actor Joey Bland is a two-time “Jeopardy” champion.

“Shakespeare has helped with our improvising because it’s an immediate call to have really heightened emotions, to believe in them strongly and to act on them quickly,” Bland said. “Shakespeare is both highbrow and lowbrow, and that leads to both silliness and stupidity. But at the same time, it’s automatically going to be a smarter play because the language is a character in the story, too.”

This is the kind of comedy that truly can’t be rehearsed, truly. Bland swears he never accidentally breaks into verse around his wife and children. Swen has never walked into a coffee shop and uttered the words, “A hot cup of thy finest ambrosia, my good madam. Here is a tuppence for thee!’”

“No, we’re still holding on to a semblance of humanity,” added Bland with a laugh. “We’re still sort of normal people.”

It’s unknowable whether The Existential Nostril will one day find its way to the Improvised Shakespeare Hall of Fame. (Yes, they have one.) But from their thousands of performances, they do have a few favorites. Swen’s is The Rocky Hamlet Picture Show. Bland recalls performing a show for students who chose the title Justin Bieber — as if it were a history play with the gravitas of Julius Caesar or Henry V. “We had to give Justin Bieber a lot of import,” Bland said. “So in our story, he was this wandering knight who gets killed by the Brothers Jonas.”

What these improvisers do believe in is sharpening their skills through practice — and vocabulary quizzes. “When we first started to work on the show, it would be a little scary,” Bland said. “Blaine would be like: ‘Go up and do a minute-long monologue about oysters — and it’s got to rhyme!’ The only way you got better was by failing at it, struggling with it and wrestling with it.”

Who knew oyster soliloquies would eventually lead to the mirth that will again unfold each night when the company returns to the Garner Galleria for a much longer stay – October 22 through March 22 –  from a rotating ensemble of traveling players. Swen estimates about 30 actors have performed in the company since 2005. One of the founding members was future Emmy Award nominee Thomas Middleditch (HBO’s “Silicon Valley”). Swen and Middleditch took classes together at Chicago’s fertile breeding ground of comedians, The Second City. As Swen explains it:

“One day we were sharing a Subway sandwich when I said, ‘Thomas, I want to do this show where we do an entirely improvised play in the style of Shakespeare.’ And I remember very clearly Thomas saying: ‘That is a stupid idea and it will never work. … But I’ll do it.’ ” It worked. An initial planned run of five shows has since turned into 14 years. And now Improvised Shakespeare, which keeps its permanent home at the iO Theatre in Chicago, has a serious fan base.

Jason Alexander of “Seinfeld” fame recently told The Los Angeles Times he has seen Improvised Shakespeare six times, “and I’m breathless every time. I’m trying to find somebody to give them a home for a real run in New York because I think it could be the next Forbidden Broadway.”

That praise means a lot to Swen. “But it also means a lot to us that we have fans who are as not famous who have come to the show 60 times. That blows us away.”

The company has been joined in their mirth by guest stars such as Patrick Stewart and Bradley Whitford. Stewart recently presented the company at the Soho Theatre in London. “Maybe Jason Alexander will join us someday,” Swen said. “He would make for a great guest.”

The irony of the company’s title is that there is no actual Shakespeare in Improvised Shakespeare. Audiences who assume the show might be a broad parody of actual Shakespeare stories will be wrong — or relieved, depending on their sensibilities. “If there are people who don’t really care for Shakespeare, that should not be an aversion for them,” Bland said. “I have friends who have told me, ‘Oh, I hate Shakespeare, so I won’t come,’ and then they come 10 times.

“No matter what kind of a night we feel like we have had, it’s always a huge success by the end. We always win people over. I would say it’s bulletproof.” 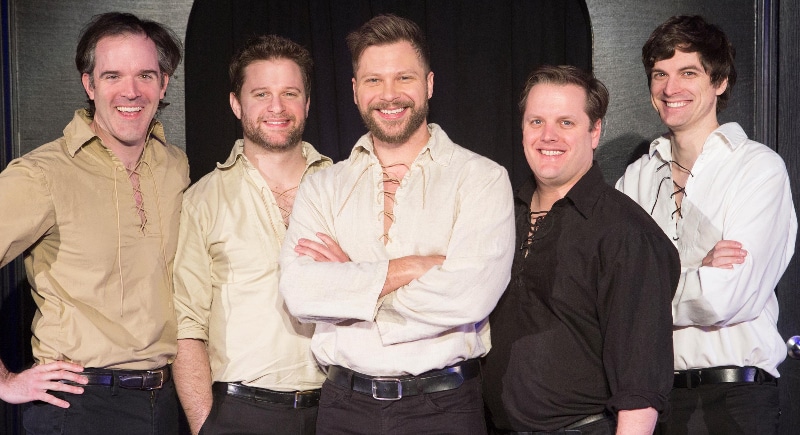 Based on an audience suggestion for a title for a play that has yet to be written, The Improvised Shakespeare Company creates a fully improvised Shakespearean masterpiece right before your very eyes. Each of the players has brushed up on his “thee’s” and “thou’s” to bring you an evening of off-the-cuff comedy using the language and themes of William Shakespeare.  All of the dialogue is said for the first time, the characters are created as you watch and if ever you’re wondering where the story is going … so are they. The night could reveal a tragedy, comedy or history. Each play is completely improvised, so each play is entirely new.

A core component of all improv comedy is to begin with suggestions from the audience that then become required elements in the performance. This assures the crowd that whatever they see next is truly happening for the first time. But while Improvised Shakespeare asks its audiences only for a clever title, we asked the questioners to offer up their own instant answers to common improv prompts. Here’s how that went:

John Moore: What’s your suggestion for the title of a play yet to be written?

Joey Bland: We had this same conversation earlier today and Blaine said something like, The Flower of Morning. Something vague like that is perfect for us because then all we have to do is give people something about flowers. We don’t have to fulfill a promise to know everything about, say … Harry Potter.

John Moore: Give me a non-geographical location.

John Moore: An item you would find in the bedroom.

Joey Bland: A treasure chest. … You didn’t say where the bedroom was. 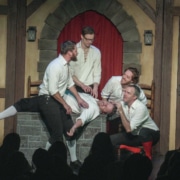 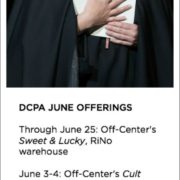 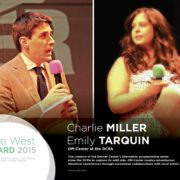 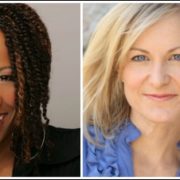