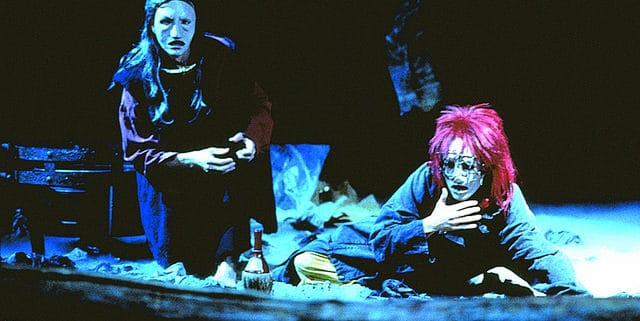 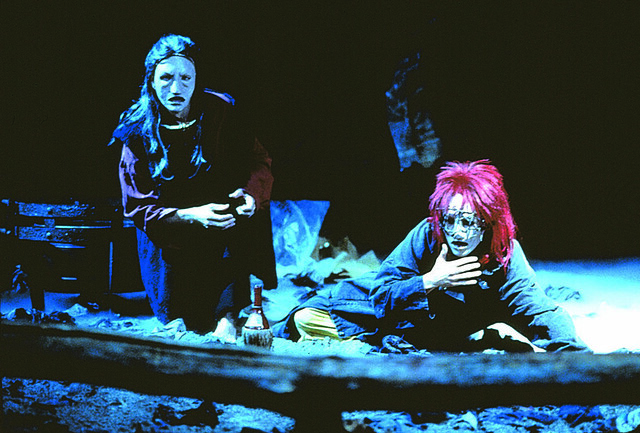 Photos from the DCPA Theatre Company’s historic 2000 co-production of ‘Tantalus.’ To see more, hover your cursor over the image above and click the forward arrow that
appears. Photos by P. Switzer.


The co-production with the Royal Shakespeare Company was ‘an extraordinary, landmark event in world culture.’

Sir Peter Hall, who co-starred in the greatest off-stage drama in the history of the Denver Center for the Performing Arts, “was one of the pillars of postwar British theatre,” Charles McNulty wrote for the Los Angeles Times.

Hall, founder of the Royal Shakespeare Company, made theatre history in 2000 when he directed the massive, 10-play epic Trojan War cycle Tantalus at the Denver Center. RSC artistic director Adrian Noble called his co-production with the DCPA “an extraordinary, landmark event in world culture.” Hall died Monday at age 86.

After Hall failed to woo European investors to premiere Tantalus in London, DCPA founder Donald R. Seawell not only came forward offering the services of the Denver Center, he seeded the endeavor with his own money, which some reports put as high as $8 million.

“I call Donald Seawell my deus ex-machina,” Hall said at the time. “When I had failed to raise the money we needed, Donald came along with that rare mixture of madness and shrewdness which marks all good impresarios and said, ‘I’ll do it.’ He allowed us to dream our dream.”

The subsequent play – which had been written by John Barton over 17 years, is still to this day billed as the largest undertaking in the 2,500-year history of theatre. “Nothing has come along like it, and it probably won’t ever happen again,” Seawell said before his death in 2015. “It brought more attention to the Denver Center than anything else we have ever done. It brought critics from all over the world. It brought people to Colorado from 38 states and more than 40 countries.”

Tantalus, directed by Peter Hall and his son, Edward, and created by an international ensemble of artists, was an epic spectacle on-stage and off. The six-month rehearsal process and subsequent British tour is a tale of artistic squabbles, clashing egos, mounting tension, hurdles of time and money – and spectacular artistic achievement culminating in a standing-room only run at London’s Barbican Theatre.

Tantalus chronicled the follies of war and mankind and for a short time placed Denver at the very heart of world theatre. But the creative process destroyed the friendship between Barton and Hall, who demanded rewrites. Instead Barton returned to London, where he sat as the Denver marathon was being rapturously received. Meanwhile, as opening approached, frustrated co-director Mick Gordon disappeared without a trace. The cast and crew told a documentary filmmaking team that Gordon’s flight was “no less than a ruthless, demoralizing act of abandonment.“

Actor Robert Petkoff, who appeared in Tantalus and returned in 2015 to star in the DCPA Theatre Company’s production of Sweeney Todd, said working on Tantalus “helped me understand the opening line in A Tale of Two Cities: ‘It was the best of times, it was the worst of times,’ ” he said. “There were moments that felt like agony and betrayal, and more moments that were sheer ecstasy and filled with the joy of storytelling in an exciting and original way.”

Journalists from leading publications around the world covered the opening, including The London Times, The Independent, The Financial Times, The Guardian, The London Observer, The New York Times, The New Yorker, The Christian Science Monitor, The Wall Street Journal, The Chicago Tribune, The Minneapolis Star Tribune, The Los Angeles Times, Associated Press, Reuters, Toronto’s National Post, The Frankfurter Allgemeine Zeitung, The Denver Post and The Rocky Mountain News.

Sandra Dillard of The Denver Post called the staging, which was presented in three parts, “a triumph for all involved.” Mike Pierson of the Rocky Mountain News called it “a play that must be seen to be believed.” Michael Kuchwara of The Associated Press called Tantalus “a corker of a tale.” And Time magazine listed the production among the top 10 best theatrical events of the year 2000.

“With its sheer scope, size and level of ambition, Tantalus fulfilled The DCPA’s stated mission to present the best theatre in the finest facilities to the widest possible audience,” wrote former Los Angeles Times critic Sylvie Drake, then the DCPA’s Director of Publications. “It was The Denver Center’s millennial gift to the city, and the crown jewel in its 22-year time-honored tradition of presenting award-winning theatre in the heart of downtown Denver.”

Hall was born Nov. 22, 1930, and attended Cambridge University, where his classmates included eventual longtime DCPA Theatre Company member and teacher Tony Church. (“Well, that didn’t harm my career a bit then, did it?” Church later joked.)

At age 29, Hall introduced Samuel Beckett to the English-speaking world with the British premiere of Waiting for Godot. “Nothing would be the same after his 1955 London production of Godot,” McNulty wrote. Leading Drama critic Kenneth Tynan said the production forced him “to re-examine the rules which have hitherto governed the drama; and having done so, to pronounce them not elastic enough.” Next, Hall set off “another revolution in dramatic possibility,” McNulty wrote, with Harold Pinter’s The Homecoming.

Hall founded the Royal Shakespeare Company in 1960 and went on to build an international reputation in theatre, opera, film and television. He was director of the National Theatre (1973-88) and artistic director of Glyndebourne Festival Opera (1984-90). He formed the Peter Hall Company (1998–2011) and became founding director of the Rose Theatre, Kingston in 2003. Throughout his career, Hall was a vociferous champion of public funding for the arts. He remained active as a director through 2011, when he was diagnosed with dementia.

Many tributes have been paid to Hall since his death, among them:

Hall was married four times, including for 10 years to actress Leslie Caron. He was married to Nicola Frei since 1990, He fathered four children: Christopher, Jennifer, Edward (one of the Tantalus directors), Lucy, Rebecca and Emma.

This report was compiled from archives, original reporting and current news reports

Born in Bury St. Edmunds in 1930, Peter Hall was educated at the Perse School, Cambridge, and St. Catharine’s College, Cambridge. After University, a debut at Windsor as director of the Oxford Playhouse, Peter Hall ran the Arts Theatre in London where productions included the world premiere of the English-language version of Waiting for Godot.

Peter Hall first worked at Stratford in 1956, returning in ’57, ’58, and ’59, when productions included Cymbeline with Peggy Ashcroft, Coriolanus with Laurence Olivier and A Midsummer Night’s Dream with Charles Laughton.

In 1960 he founded the Royal Shakespeare Company, directing 18 plays at Stratford for the RSC, including The Wars of the Roses; David Warner’s Hamlet and premieres of plays by Harold Pinter, Edward Albee and John Whiting, establishing the London home of the RSC at the Aldwych Theatre.

In 1973, Peter hall was appointed Director of the Royal National Theatre, a post he held for 15 years and during which he moved the company to the new premises on the South Bank. Productions for the RNT included John Gabriel Borkman, Happy Days, Hamlet, Tamburlaine the Great, Bedroom Farce, Amadeus, No Man’s Land, Volpone, The Oresteia, Antony and Cleopatra, Animal Farm, The Tempest, Betrayal, Cymbeline and The Winter’s Tale. He returned to the RNT to direct The Oedipus Plays by Sophocles which opened in Epidaurus as part of the Athens Festival.

On leaving the RNT, he launched The Peter Hall Company with productions of Orpheus Descending with Vanessa Redgrave and The Merchant of Venice with Dustin Hoffman. Eighteen other productions followed including An Ideal Husband, The Master Builder, the Stephen Dillane Hamlet, Lysistrata, School for Wives, An Absolute Turkey and A Streetcar Named Desire with Jessica Lange playing in the West End, the regions, Broadway and Europe.

The season of 13 plays at the Old Vic in 1997 was a landmark. In 1998 the company moved to the Piccadilly Theatre where Hall staged productions of Waiting for Godot, The Misanthrope, Major Barbara, Filumena and Kafka’s Dick. In the summer of 1999 he directed Measure for Measure and A Midsummer Night’s Dream for the Center Theatre Group/Ahmanson in Los Angeles where he also brought his remounting of Amadeus, a hit on Broadway in 2000.

Since his debut in 1957 with The Rope Dancers, Peter Hall has worked frequently on Broadway, winning Tony Awards for The Homecoming and Amadeus. In February 1992 he directed the world premiere of John Guare’s Four Baboons Adoring the Sun. His production of An Ideal Husband transferred to Broadway in 1996. He received Tony nominations as Best Director for both of these productions.

Peter Hall also has directed more than 40 operas all over the world including Glyndebourne Festival Opera (where he was Artistic Director, 1984-90), the Royal Opera House, Covent Garden, Geneva, Los Angeles, Houston, Chicago, The Metropolitan Opera House, New York and Bayreuth, where he directed a celebrated Ring Cycle.

For television he has directed She’s Been Away, The Camomile Law (Channel 4) and Jacob for Turner TV/Lux. In 1996 he directed and produced The Final Passage a two-part series based on the award-winning book by Caryl Phillips.

His diaries about the opening of the new National Theatre were published in 1983 and his autobiography, Making An Exhibition of Myself, was published in 1993.