Thomas Stearns Eliot is widely regarded as one of England’s greatest writers and was awarded the 1948 Nobel Prize for Literature “for his outstanding, pioneer contribution to present-day poetry.” 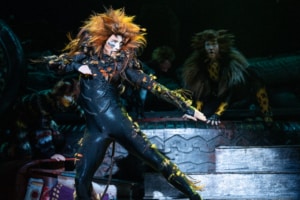 While Eliot was writing about cats at a time when they served the useful purpose of keeping mice in check, he had a lifelong affection for them, often sending letters and poems about his own cat to his godson, Tom Faber and making up unusual or outlandish names for cats for friends.

Practical Cats was originally going to include poems about consequential dogs as well; however, Eliot ultimately felt that it would be “impolite to wrap cats up with dogs.” The book was eventually titled Old Possum’s Book of Practical Cats, in reference to Eliot’s alias among his friends. 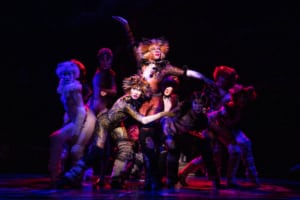 Lauren Louis, Chelsea Nicole Mitchell, and the company of the 2021-2022 national tour of CATS (Photo By Matthew Murphy, Murphymade)

Most of the poems were written between 1936 and 1938. Many of the cats were modelled on notable figures: Macavity is styled on Moriarty, the infamous villain who challenged Sherlock Holmes; Skimbleshanks was based on Rudyard Kipling’s The Long Trail, and Gus the theatre cat mentions Henry Irving, a great actor in the Victorian era. Grizabella the glamour cat, however, remained incomplete and unpublished as Eliot felt it was becoming too sad for his intended youthful audience.

Old Possum’s Book of Practical Cats was first published in October 1939 just after the outbreak of WWII and sold for 3 shillings and sixpence a copy. Today they are recognized as classics and have been given their second (of nine lives) in Andrew Lloyd Webber’s long-running musical, Cats. 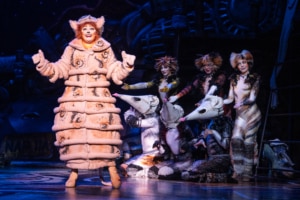 Webber grew up reading Eliot’s poems as a child. In the late 1970s, he set about adapting the poems into a stage musical with collaborators Trevor Nunn (director) and Gillian Lynne (choreographer).

Nunn was intrigued by the premise of Cats but felt that some narrative arch was vital to making the piece work. When the unfinished poem about Grizabella was sent to Webber, Nunn felt it was the key to the whole piece. With music by Webber and lyrics by Nunn, Grizabella and her memorable song, “Memory,” were used to form a story that the other poems and dance would complement.

This article was compiled by material provided by Cats. 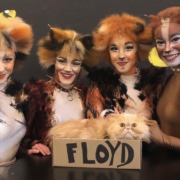 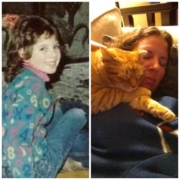