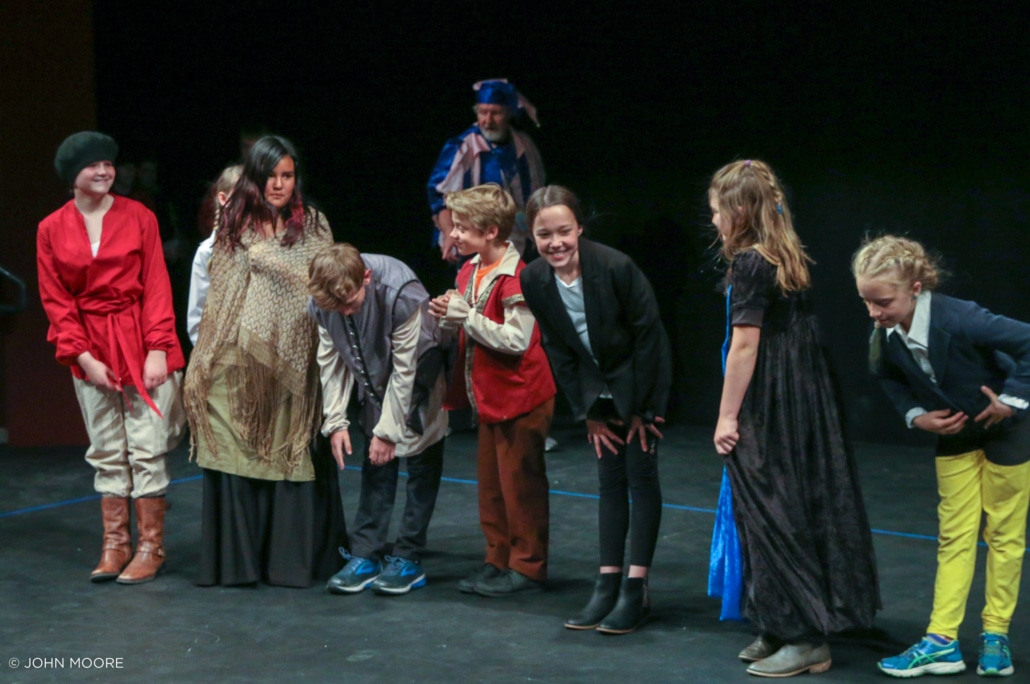 Once again, the Denver Center for the Performing Arts is pleased to partner with Denver Public Schools and DPS Foundation on the 37th annual DPS Shakespeare Festival. Students and schools from throughout the district have been rehearsing all year for this annual event. The public is invited to watch the virtual ceremony on Friday, April 30 at 10:30am.

Rachel Taylor: Hi everyone. My name is Rachel Taylor. I’m a teaching artist and the program manager for literacy engagement and resiliency programming at the Denver Center for the Performing Arts.

Rachel: And she’s also my daughter! So, Mayarae, we are here to talk about all the good things theatre, art and the upcoming DPS Shakespeare Festival. We’ve never done this before. It’s exciting.

So Mayarae, my first question for you is:

How has arts education affected your life so far?

Mayarae: Well, in so many ways. I think I’m very lucky to have grown up in a family that really values art really highly. So that has always been a huge part of me, will always be a huge part of me. Theatre specifically has taught me to be confident. It’s shown me that everybody has a voice that holds weight in the world, as well as have empathy for other people. Theatre gives you the chance to put yourself in other people’s shoes whether or not you would ever imagine yourself being in their shoes. And I think it’s really important and valuable lesson that we all can learn.

Why is arts education important to you?

Rachel: Ironically, all the same reasons. I would add to that, though, that theatre and arts education creates a whole human being, it creates a whole learner. Theatre and art sort of look at science and politics and history and psychology — all those things that make us human — and then reflect them back to us. And I think that can be a really powerful thing and I think it can also be a life-changing thing at times, and that’s why I feel so strongly about it.

What has your favorite arts class been so far?

Mayarae: I’ve been doing a lot of arts classes over the years, but I’d say my favorite one at the moment is one I’m taking at CCD. It’s 2-D design and we’ve gotten a lot of art terminology and turned it into something really creative. This past project that I just finished doing is an activism poster. We had to choose a movement that we feel really strongly about or that is important to us and turn it into a portrait and I chose the “Protect Asian Lives” movement because that’s really important to me right now.

I think that art in general, especially that I’ve learned through art classes, has taught me that art has the power to change people’s minds and it has the power to reflect on the world today. We see this a lot with what’s going on right now, so I think it’s very valuable.

Why is art important to you? Why did you become an arts educator?

Rachel: I also grew up in a household (with your grandparents) that also highly respected all forms of art. My sister was a dancer with Colorado Ballet and I fell in love with the magic and the majesty of the ballet, but I can’t dance. So, theatre was sort of the next best thing for me. My mother was a librarian, so I was constantly consuming books and literature and stories. My dad was a teacher, so if you roll all those things up into one, it sort of computes and comes up with what my job is now, so it’s cool.

I feel like I really became an arts educator because I saw how much need there is in the world for children to be able to express themselves. You know, human beings since the beginning of humankind have been telling stories whether it was on cave walls or passing that story down orally, we’ve always been doing that and we’ve continued to do that. The modern technology and world we live in now and the electronics and zooming is challenging that tradition a little bit, I would say. So I think, now, arts education is even more important than ever before so vital to giving students a way to explore who they are and express themselves and challenge them to think outside of the box a little bit. 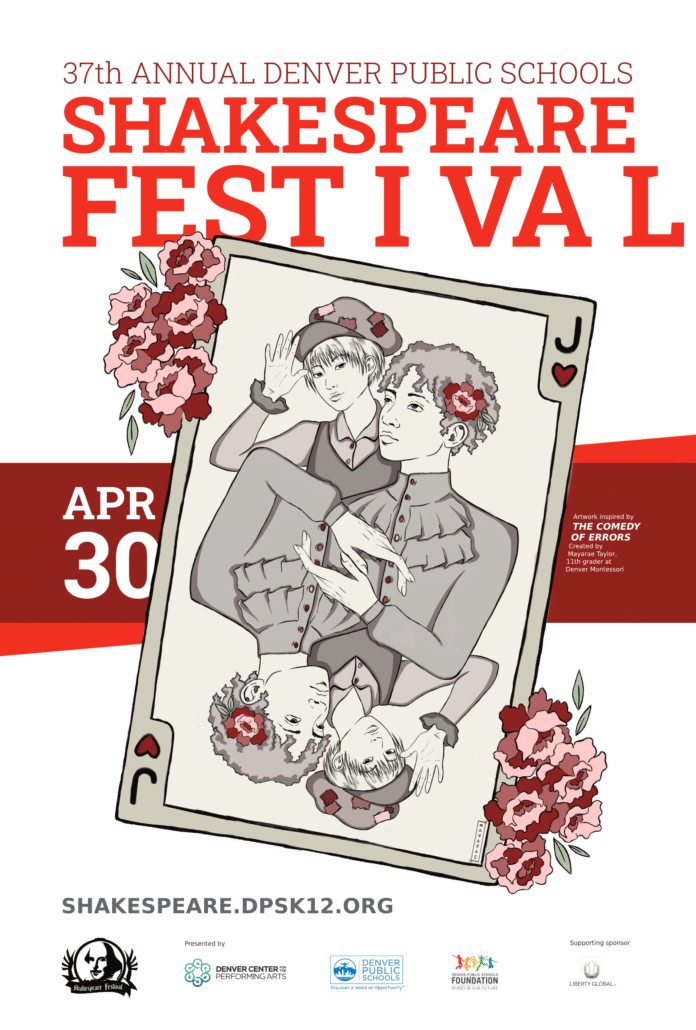 Mayarae: DPS sends out an invitation to students in the District every year about how they can submit an art piece to the art contest and earn a chance to be featured on the poster for the Shakespeare Festival. It was a blind contest and I luckily got chosen last year, which is amazing and honorable. Since COVID happened and it wasn’t in person last year, and is virtual again this year, they offered to just let me do it again this year. It was really exciting and I’m so honored to have this opportunity. I’ve gotten to learn what it’s like behind the scenes and work with the Denver Center’s [Graphic Design Director] Kyle Malone about what his process is like and get to see everything. He’s really taught me a lot and this experience has taught me a lot. And I think it’s really important and I’m really glad to have this opportunity.

Do you want to talk about Joe Craft and why the Shakespeare Festival is important?

Rachel: Joe Craft, for those of you who never met him, and Mayarae I’m so sad you never got to meet him in person. Joe Craft is the founder of the Shakespeare Festival. He was also a dear friend of our family’s. He and my father worked on the School of the Arts together in the career education center and my mother and Jane still speak on the phone almost every day. We lost Joe this last few months and that’s one reason the Festival is so important this year is to honor him. He started the Festival so small and it’s grown into this beautiful thing. He started it because he believed so strongly in how Shakespeare could affect students, even students who don’t speak English as their first language.

To watch a child’s first look at some Shakespeare text and just, you know, their eyes glaze over and they have no idea what the words are and what they’re saying. And then they turn a 180 and are standing on the stage and speaking the words with love and passion. You know, sometimes not well, but it doesn’t matter because they did it, you know, they did it. It’s absolutely transformative in terms of being a teacher and watching that happen for a kid. And the fact that the Festival has given that gift to tens of thousands of students over all the years the Festival has been going has been remarkable. And that’s Joe Craft’s legacy.

If you never met him, Joe Craft is…if you imagine in your head Dumbledore, that’s Joe Craft. He was larger than life. He knew everything there was to know about Shakespeare. He could do it backwards and forwards. He could tell you every objective of every character, every plot line, every line. He didn’t know those things because someone made him learn those; he knew those because he had so much respect for the storyteller that William Shakespeare was and he believed so strongly in the messages of the play and in the themes of humanness that lie in all of his work. We definitely will be thinking about Joe and his amazing wife Jane this year at the Festival. 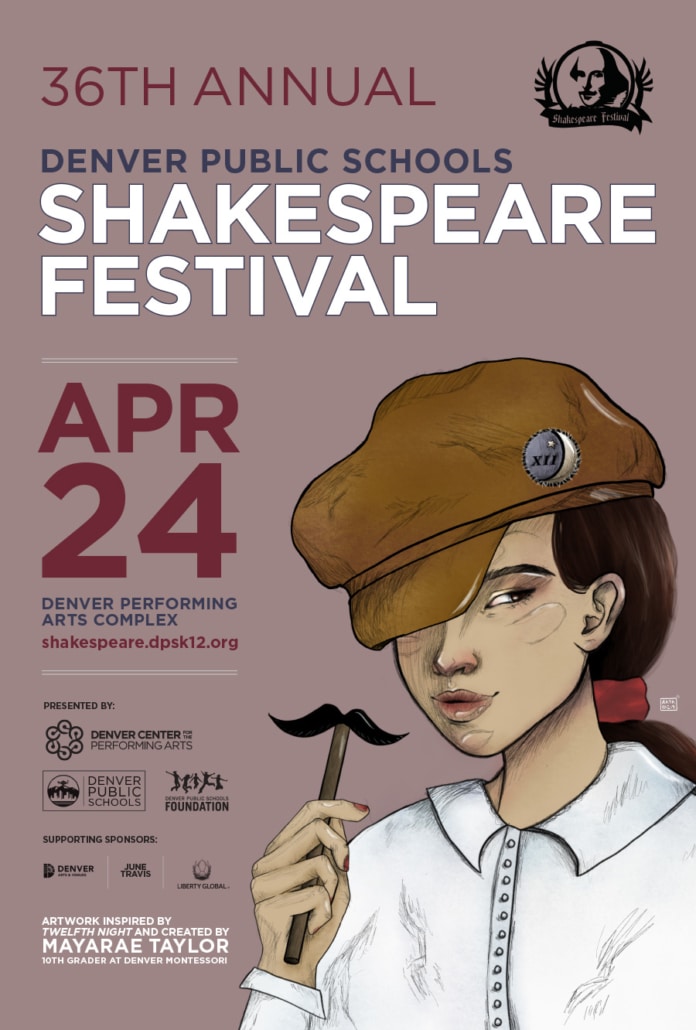 Mayarae, how do you think being able to work with Kyle and designing the posters for last year and this year…how will that affect what you want to do going forward?

Mayarae: Well, as a junior, I’ve been thinking a lot about college and career goals this year, especially. I know I want to go into something design-related. I feel I’ve said this before, but having this opportunity is really special to me because it gives me a look at what it would be like to be a professional artist or designer. Especially working with Kyle, I’ve gotten to see that first hand and know what I’m getting myself into, if that makes sense. And it’s really valuable and an amazing opportunity that not a lot of kids have my age. So I’m very, very lucky and I’m excited to go forward with this.

And Mayarae, before we go, what is your favorite Shakespeare play and why?

Rachel: Oh, that’s was such a good example. Mine is not. She took the moral high ground and she stood her ground. Well, mine is Macbeth because…witches.

Mayarae: I believe that.

Rachel: I love Macbeth and I’m so excited that our Shakespeare in the Parking Lot group is doing it this year because it has all those rich, interesting human things that we get sucked into. And then…witches. So, you know, magic. Who doesn’t like that? That’s my favorite.

Well, Mayrae, thank you so much for spending a little time with me this afternoon, and we hope we see all of you at the DPS virtual Shakespeare Festival this year. Thank you so much, everyone.