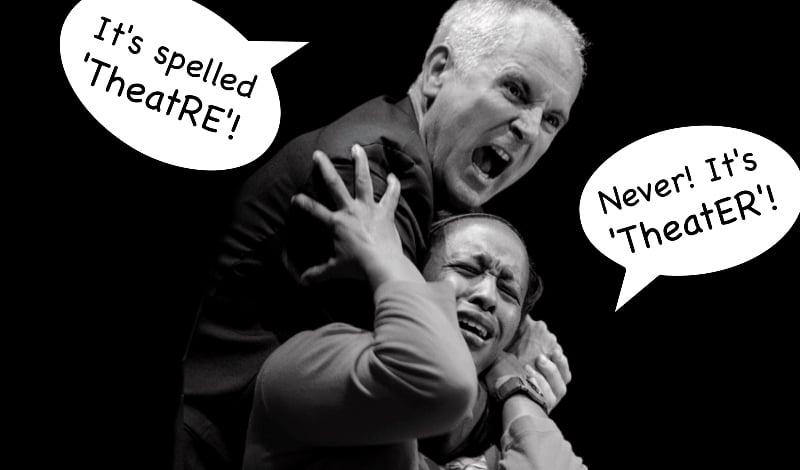 Photo from Curious Theatre Company’s 2016 production of ‘White Guy on the Bus.’ Photo of Sam Gregory and Jada Suzanne Dixon by Michael Ensminger.

When The New York Times announced in March that Denver’s Curious TheatRE Company will be opening its fall season with Antoinette Nwandu’s “Pass Over,” the article claimed the play was being presented by Curious TheatER Company.

As painful as this is for a journalist to say, this is a rare example of a credible media outlet not only getting it wrong. It got it wrong on purpose. This is real #FakeNews. The correct spelling is Curious TheatRE Company.

But at The New York Times, it doesn’t matter what you call yourselves. Even if you have “TheatRE” in your proper name, The Gray Lady will change it to “TheatER” in America’s leading theatre, er, theater publication. That’s just their style.

As someone who has covered the Colorado theatre/er community for nearly 20 years, I have always been fascinated by how companies and journalists alike use the word both in their names and in everyday use. So I did a study on it.

Colorado has 92 active or recently active companies – defined as any troupe that has staged a production in the past year or has one scheduled in the next year. It turns out the vast majority of companies that have Theatre or Theater in their proper names prefer the word Theatre (40). But not all. Because are we or are we not Americans??? Fourteen Colorado companies use TheatER in their names. And a healthy number (38) perhaps smartly avoid the word altogether.

Media outlets follow designated style books – these are compendiums of rules not necessarily covered by grammar stricture to ensure consistency in copy. More than 1,400 U.S. newspapers use the Associated Press Stylebook as their bible, and that bible calls for theatER in all cases except proper names. The DCPA Stylebook, which governs this very article you are reading, calls for theatRE in all uses except proper names. And The New York Times … well, follows its own bliss. 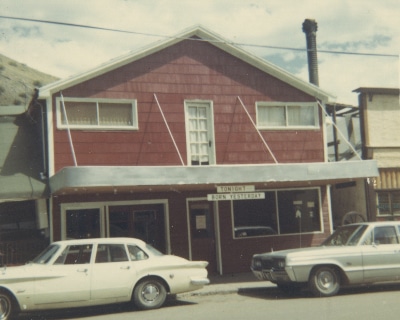 When the Creede Repertory Theatre opened in 1966, it was known as ‘Operation Summer Theater.’

But those aren’t the only reasons companies have chosen to use TheatRE in their names. Our survey revealed some fun facts about our shared Colorado theatre/er history. For example, two of our mountain companies call themselves TheatRE simply to distinguish themselves from their towns’ movie houses:

Perhaps no one in Colorado is more passionate about the preferred use of TheatRE than Steve Wilson, Executive Artistic Director of the Mizel Arts and Culture Center, which until recently ran the Denver Children’s TheatRE. Wilson has a magnet in his office that says: “Theater re.” You’ll note the ER is stricken in favor of RE.

“I was the one who insisted on the ‘RE’ spelling for both the Denver Children’s Theatre and the Elaine Wolf TheatRE we perform in,” Wilson said. “Every respected theatre professional I have ever encountered spells theatRE with an RE. One of my teachers once said that the ER spelling can refer to the actual building, but I believe we theatRE people aspire to the belief that our spaces are always inhabited by the higher art at all times. Hence – assume pretentious British accent here – ‘The TheatRE!’ ”

But the mighty minority have their own passionate reasons for embracing the word TheatER. Primarily because we are Americans, and a few hundred years ago, we staged a revolution to get out from under the Brits’ oppressive word clutches (and I suppose some other clutches as well.)

“We call ourselves Local TheatER Company because we develop new American plays, and we spell theater ER here in the United States,” said founder Pesha Rudnick. Rick Yaconis, founder of the currently dormant Edge Theater Company, chose ER, he says, “because TheatRE seems pretentious to me, and I didn’t want there to be anything pretentious about The Edge.” John Ashton, who took over the late Avenue Theater in 1990, went with TheatER “just because theatRE seemed kind of uppity and froo-froo to me,” he said. “I’m not sure what authority I may have to think that way; that’s just how it feels.”

Then there is Buntport TheatER collective, which in typical self-deprecating fashion picked a side “but not from a place of great passion ­– except when playful sparring with friends is involved,” the company said in a collective response. “We discussed it when we started, but not at any great length. It’s just: We don’t write ‘colour’ or ‘neighbour’ or ‘centre’ in the U.S., so we also don’t tend to write ‘theatre.’ ”

The Buntport gang also pointed out that Grammarist.com, a credible source for grammar conflict resolution, stays neutral on this issue, saying: “In most contexts, there is no difference in meaning between theatER and theatRE. Neither has any special definitions in general usage.”

OK, so that might be grammatically true. But what is drama without great conflict? To stoke the embers further, here are a few representative responses when we asked Colorado companies why they chose the names they chose:

What’s in a name? Here is the current Colorado roll call: