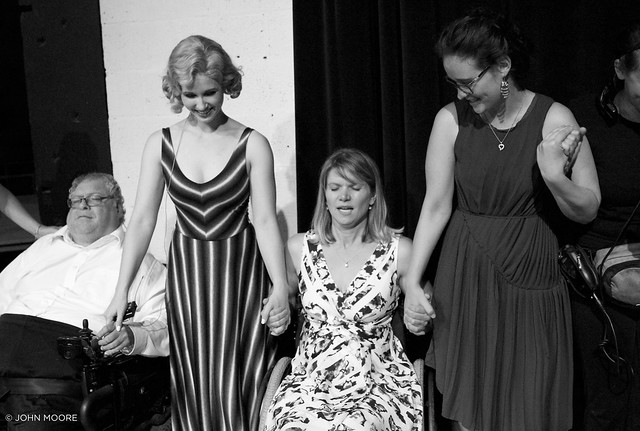 Photos from Opening Night of Phamaly Theatre Company’s ‘Annie,’ playing through Aug. 6 at the Denver Center’s Stage Theatre. To see more, click the forward arrow on the image above. Photos by John Moore for the DCPA NewsCenter.

The pre-show ritual is called ‘Zap,’ and it infuses the cast and crew with energy and focus.

In the minutes before the opening performance of Phamaly Theatre Company’s Annie, actor and founding company member Mark Dissette gathers the cast of 36 actors, each with widely varying disabilities, along with crew and volunteers, for one of the most electrifying pre-show rituals in the local theatre community.

They form a circle. Those who can stand, stand. Those who cannot roll up in their wheelchairs. Those who can clasp hands, clasp hands. Those with missing or disfigured hands make contact with their neighbors as best they can. They all close their eyes in reverence as Dissette calls out from memory the agonizingly long list of company members who have passed away during the 28 years that this unique company has been creating performance opportunities for actors with disabilities.


Dissette then begins the ritual they call “Zap.” As if there weren’t enough energy in the air already, the group begins to buzz. Literally. “This is our dream – get a little louder,” Dissette orders. And they do. “Bzzz.” “This is our vision – get a little louder.” And they do. “BZZZ.” After more exhortation, the vibration builds to a deafening climax.

Now there is nothing but sudden, solemn silence. The next spoken word is not to be uttered until the actors hit the stage. For a company whose actors are blind and deaf, with disabilities ranging from stroke to spina bifida to multiple sclerosis to AIDS, it is both the beginning and the culmination of an extraordinary opening-night journey.