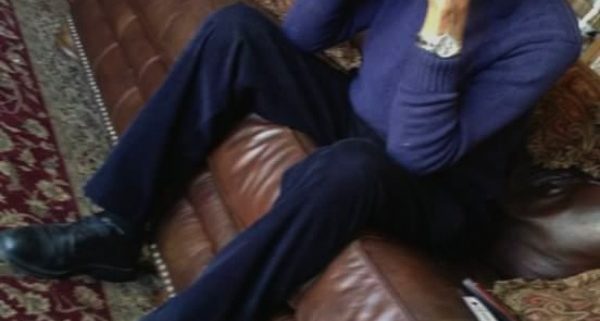 Growing up in an interracial family in segregated Denver in 1958, it was not uncommon for the Parker family to be followed by police while driving in the family station wagon.

“We would ask my Daddy, ‘Why is Mr. Charlie always following us?” said international dance legend Cleo Parker Robinson. “And Daddy would tell us, ‘See how lucky you kids are to get a police escort? It’s because we are just as important as the president of the United States!’

“He was always taking the edge off situations that might otherwise make us very angry or resentful,” said Robinson. “He was always working on our hearts.”

Parker’s father was Jonathan “J.P.” Parker, a pioneering Denver actor at the old Bonfils Theatre, professor at Colorado Women’s College and longtime facilities manager at the University of Denver’s Newman Center. He died Dec. 19 at the Collier Hospice Center in Wheat Ridge. He was 87.

“We called him The Chief,” Robinson said. “He was committed to passion and compassion.”

Cleo Parker Robinson grew up to be the founder, executive artistic director and choreographer of the now 40-year-old Denver institution known as Cleo Parker Robinson Dance. She will incorporate a dance tribute to her father on Saturday, Jan.  23, at the International Association of Blacks in Dance Founders Showcase she is hosting from 8-10 p.m. at the Ellie Caulkins Opera House.

Jonathan Parker was born Jan. 20, 1928, on a family farm in Texarkana, Ark. Not wanting to pick cotton, he migrated to Denver on his own at age 15. He developed abilities in music and sports at Manual High School and intended to become a doctor. His role model, Robinson said, was the actor Paul Robeson. “He wanted to be all-state in football, basketball – and singing,” she said.

Parker met his wife, Martha Mae Roberts, through music. She was an apprentice playing the French Horn for the San Diego Symphony, which was visiting the University of Denver, where Parker was a student trying to get into pre-med. They met in the band room and, Robinson said, “she fell in love at first sight.”

The couple were married in 1956, “but they had to go to five states before they could find someone to do it,” Robinson said. Interracial marriage would not become legal in Colorado until 1957, and in the United States as a whole until 1967. Martha was disowned by her parents for marrying an African-American.

Martha was completely naïve to racism when she met Parker, Robinson said. But eventually she became an activist after witnessing first-hand so much discrimination against her husband and four children, including an inability to convince anyone to sell the couple a house. The Parkers instead moved into the second floor of the landmark Rossonian Hotel in Five Points, where the black community gathered because of discrimination throughout the rest of the city. But encounters with greats such as Duke Ellington, Louis Armstrong, Ella Fitzgerald, Billie Holliday and Nat King Cole were common. Still, in a reversal of discriminatory norms, Martha was made to enter the Rossonian through the back entrance. Once the Parkers got a house, a cross was burned on the lawn.

At age 10, Robinson almost died when her kidneys shut down and a segregated Dallas hospital did not admit her quickly enough to prevent heart failure. The Parker children were often taunted for their mixed heritage. At one point, a white woman attacked Robinson with a broken bottle.

But through it all, she said, her father “carried the peaceful principles of Dr. Martin Luther King in his soul.” She said her parents “were both real about their love of people and music and each other.”

“As an expression of his lessons for tolerance, the family developed strong ties with a neighbor, Winston, who was homosexual,” Albert-Honoré wrote. “Winston, who happened to be white, was harassed with hate crimes, and eventually was viciously murdered. In the midst of mourning the horrific death of his beloved family friend, J.P. served as a pillar of strength to his family and encouraged his children to use love, compassion and tolerance when confronted with ignorance, envy and hate.”

Parker applied for a janitorial job at the Bonfils Theatre in 1956 to help pay for his studies. And he almost didn’t get it.

“Daddy was very proud, but he had just started a family, and he needed a job,” said Robinson. “So he didn’t care what he did.”

Days before the first show was to open after the arrival of the late, legendary producer Henry Lowenstein at the Bonfils Theatre, the building’s custodian was found dead after having had a heart attack. With a new show opening, a replacement was needed immediately.

In walked Parker. “He obviously had talents that went way beyond being a maintenance man,” Lowenstein said in a 2009 interview. “I was going to hire him, but then I found out that people there were aghast. They said, ‘We can’t hire a BLACK person. What are you thinking?’ “

When Lowenstein heard the complaint, he said, “I am going to call (owner) Helen Bonfils, because this kind of thing is crap. I said to everyone, ‘The doors are going to be open to everybody here, and everybody is going to be welcome.’ So I called Helen up. She said, ‘Of course you will hire him.’ ”

Before long, Parker was helping out backstage, and eventually Lowenstein cast him in the role of a clown, making Parker the first black actor at was then Denver’s most prestigious theatre. But no one in the audience ever knew it. As the clown, Parker was covered in white face.

“Even though they never intended to hire a person of color in the first place, Daddy was never bitter about it,” Robinson said. “In fact, I think that is part of the reason he became such a great actor. Internally, he may have been crying, but theatre allows us to put on a mask where we can hide our true selves.”

Robinson called Lowenstein’s decision to hire Parker a powerful and courageous one. “Daddy understood the concept of systemized racism,” Robinson said. “As far as he was concerned, Henry wasn’t white, and he wasn’t black. So I asked Daddy, ‘Well then – what is he?’ And Daddy said, ‘He’s Jewish!’ ”

Eventually, Parker was given larger roles over the next decade at the Bonfils Theatre. He was cast to play a butler with no speaking lines, but Robinson said Parker drew laughs and applause just carrying a tray across the stage. The progression culminated when he was cast to play the leading role of Walter Lee Younger in a milestone production of A Raisin in the Sun.

“I know it changed his life because that play was his life,” Robinson said. “He didn’t have to act, because that was his story.”

It was also important, she said, for white audiences of the day to see black performers on the Bonfils Theatre stage.

“This was long before they were seeing Bill Cosby on television,” Robinson said. “This was people being able to see that black people and brown people and white people – we’re all just real human beings sharing real human experiences together.”

The Parkers had four children: John Whalon Parker Jr., who died in his sleep at age 19; Cleo Parker Robinson; Leslie Sue (Susie) Parker Wallace; and Randall Belafonte Parker. The Robinsons also fostered two teenage brothers in the neighborhood. Parker nicknamed Randall “Poncho Villa” because he was the defiant one.

“So if you can imagine, here we had a black daddy and a white mommy and we’re calling our little brother Poncho Villa,” Robinson said with a laugh.

“Roundtables at home were largely geared toward whatever piece he was working on at the time. But he would relate them to our society, and he wanted us to voice our opinion. Daddy always spoke in parables that were colorful and powerful and filled with dimension and complexity.”

Parker left acting behind when he was hired to be a manager and professor at the former Colorado Women’s College Houston Fine Arts Center. He was also the first technical director of his daughter’s company — Cleo Parker Robinson Dance.

“I am saddened by his passing, yet my heart fills with his love and unique energy and vision for peace,” said his former student, Beckah Reed. “He was subtle … yet solid.”

Today, Randall Parker works as an actor and musician on the West Coast. Susie toured internationally as a dancer. Martha Parker, who was amicably divorced from Parker, died in 2005. Parker married Reina Parker and together they had a son, Nicholas, and daughter, Samantha, now 18 and 16.

Jonathan Parker, second from left, in the early days of the Denver Center. Producer Henry Lowenstein is second from right.