In this daily five-part series for the DCPA NewsCenter, we introduce you to the plays and playwrights featured at the Denver Center’s 2019 Colorado New Play Summit. Over the past 14 years, 29 plays introduced at the Summit have gone on to be premiered as fully staged productions on the Denver Center Theatre Company mainstage season. Today: Tony Meneses, author of ‘twenty50.’

“Maybe on the ride home, you’ll be like, ‘Wow, I just fell in love with a Latino family for a night.’ ”


The play in a nutshell: They say in the year 2050, the population of America will be so diverse that we will no longer have race issues. Tony Meneses’ twenty50 challenges that idea and actually posits the more likely scenario that the white power structure in this country will absorb Latinx people into its own population as a way of maintaining a white majority. But if that were to happen, what would be the cultural cost?

The playwright at a glance: Tony Meneses was born in Guadalajara, Mexico, and raised in Albuquerque and Dallas. He’s a two-time recipient of the Kennedy Center Latinx Playwriting Award and is currently under commission from the Denver Center Theatre Company, which means it has the right-of-first-refusal to fully stage produce twenty50 if it so chooses. He graduated from the University of Texas at Austin and earned his MFA from the Iowa Playwrights Workshop.

Tony Meneses: Actually, yeah. I hope so. I think what drew me to the theatre community in the first place was the spirit of kindness and generosity. And it’s been so great to meet and work with other like-minded and like-spirited individuals. I want to give out the energy of kindness in the same way that I receive it so often.

John Moore: Wow, I wasn’t actually expecting a serious answer to that question. John Moore: Oh, it was, and that was a great answer. So tell us how your Denver Center commission came about.

Tony Meneses: About three years ago, I got a random email from [Director of New Play Development] Douglas Langworthy saying, “I’ve read your work. Would you be interested in a commission?” He said it in the form of a question, which I thought was really sweet. I was like, “Of course I’m going to take this commission. Why would you even ask?” And it’s just been this really wonderful, supportive relationship ever since.

John Moore: So introduce us to the world of twenty50.

Tony Meneses: twenty50 is taken from the thesis that by the year 2050, we’re going to be so diverse as an American people that prejudice and racism no longer exist. So there is no majority anymore. Which sounds like a Kumbaya version of where this country is heading. But just looking at the history of America and the malleability of race and the systemic institution of white supremacy, I’m dubious of that conclusion. America has shown that minority communities are initially otherized and then eventually accepted and absorbed into whiteness. And that makes me wonder if that is going to happen with Latinx people. I already see it happening now. Certain politicians who are Republican and Latino have assimilated, and have sacrificed a lot of their own identity to do so. Perhaps they no longer pay attention to things that are culturally authentic to who they are. So the play asks this big question: “What if Latinos were white one day?” What might be gained in that? Well, power, certainly. But while some would be seduced by that scenario, others would resist it. Where does that clash lead to? So it’s a cautionary tale about where we’re heading.

2019 Summit: A quick look at all five featured plays

John Moore: What do you mean that, in America, marginalized communities are eventually absorbed into whiteness?

Tony Meneses: It happened with the Irish, with the Italians, with Greek people and with Jewish people. Those were historically otherized identities, and treated as such until eventually, through time and paradigm shifts, they just became white. That’s what I mean when I say race has proven to be malleable throughout history. And I’m taking that one leap forward in this play by not only saying, “This could also happen to Latinx people,” but by saying that I’m already seeing it happen in the way certain Latinx members of our community have assimilated. These are Latinx people who have stopped speaking Spanish and have told their children to stop speaking Spanish because they want to belong. They want to be part of the larger culture and not be otherized or discriminated against.

John Moore: How does that play into your story?

Tony Meneses: The plot is about man who is at the crossroads of identity politics. He’s a Mexican immigrant who was brought to this country illegally as a child. But he has ascended, and he is now in a position where he is running for Congress. So while he wants to preserve his heritage and honor it, at this point, because Latinos are essentially white, it can actually be damaging to him to claim his heritage. He has to present himself as white to appeal to a broader swath of constituents. So this is his internal conflict: Does he honor the past, or does he look to the future and embrace his whiteness? John Moore: Just to be blunt: You say some people will think of an America without a white majority as a kind of Kumbaya moment. But I can more cynically see some threatened white people taking that as a call to arms.

Tony Meneses: I think the country might take one of two directions: There could be a conservative backlash from those who don’t accept this and it becomes violent, in the way that we are seeing right now. But I can also see white America saying, “Well, they’re here. Might as well ask them to join our club. That way we get to keep our majority status. We get to keep the power that’s been historically preserved for us.

John Moore: How does your own background inform the story?

Tony Meneses: I’m a Mexican immigrant. We came here through visas that expired and we just never left. But we did it through a legal process and eventually became citizens. So I’ve gotten to live both narratives. I have been the outsider, but I am now someone who has the civic power to vote, and I embrace that power.

Tony Meneses: That’s something I’m wrestling with artistically, especially with this play. What is most important to me in my plays is Latinx representation. Most of my plays are about dismantling perceptions and stereotypes of what Latinx people are. So I don’t write cartels. I don’t write gangs. I strive for something more hopeful and more positive. This play is doing that, hopefully. But this is not a soapbox. This is not a diatribe. This is not an essay with characters. This is, at the end of the day, a play with human beings. My political goal is to get the audience to care about the human beings first, and then hear the ideas that are coming out. I want them to see characters we thought were totally the opposite of us ideologically who, maybe, might be similar to us. In whatever spectrum we fall on, conservative or liberal, there’s a character for everyone in this play. And I’m trying to give humanity and real intellectual rigor to each side of each idea so that we can understand both sides. And I think that’s an important thing to do now: Not to make the divide bigger, but instead to bridge both sides and kind of get where each side is coming from. John Moore: What do you want to tell people in terms of the tone of this play?

Tony Meneses: I actively use the term “Mexicovian” to describe my work. I’m really inspired by Chekhov. Yes, it could be said that I’ve been colonized by Chekhov and the Western theatre, but I see Mexicans in Chekhov’s characters. I see my family. Chekhov instills his servant characters with beautiful glimpses of humanity. They’re not just there to take the plates in and out. They have their own universe. I’m so moved by that gentle, compassionate care of his characters. I saw a lot of white plays growing up, but I could still see myself in them. I thought, “Wow, that’s really powerful that this old Russian guy made me see myself as a contemporary Mexican.” And that made me wonder if I can do that with my own work. I think all artists are wrestling with what impact we can have politically right now. I think it’s empathy: Just being able to connect with another human being on that base level and to invest and to root for a character. And then maybe on the ride home, you’re like, “Wow, I just fell in love with a Latino family for a night.” And maybe that translates into them actually falling in love with a Latino family in real life, or at least upends assumptions and conclusions that we make on both sides, that a Latino family can see a white play and a white family can see a Latino play, and that we both kind of leave with the same spirit of connection and community.

Before we go: Why did you choose to spell the title of your play twenty50 instead of 2050?

Tony Meneses: So we know that 2050 is literally the year this play takes place. But spelling it twenty50 leaves a little space for mystery. What does that mean, exactly? Also, spelling it twenty50 is a subversion of the way we normally look at that number, just as this play is asking us to subvert how we look at all kinds of things. I want to subvert how we look at what we think is going to happen in the future.

John Moore: And what are your initial thoughts on the Colorado New Play Summit?

Tony Meneses: That all five plays are rehearsing at the same time and on the same floor is really endearing to me. We take breaks at the same time. This really is a community. It already feels like we’re culture-building together. And the two-weekend structure is kind of mind-blowing for me. I’ve done readings in the past where it’s a one-and-done thing. To have an audience see the play on the first weekend, and to learn from that, and to use that feedback to inform where you want to take it for the following weekend is very special. I feel like writers would kill for that opportunity anywhere else. And Denver is the only place that I know of that does it. 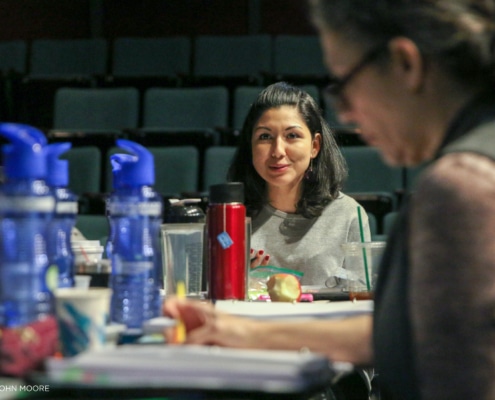 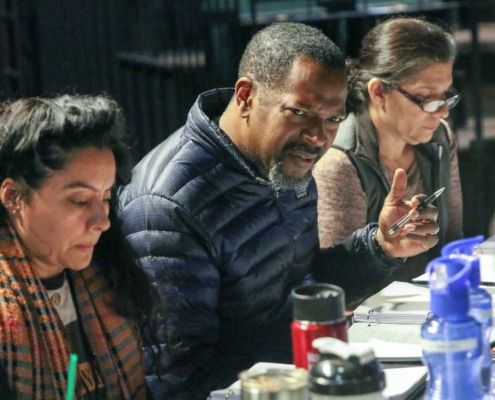 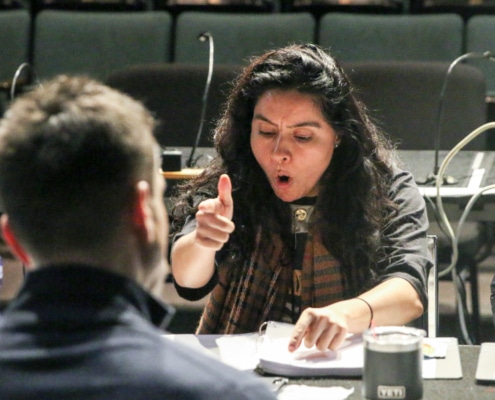 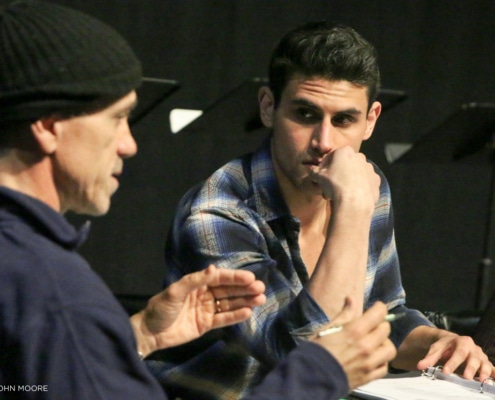 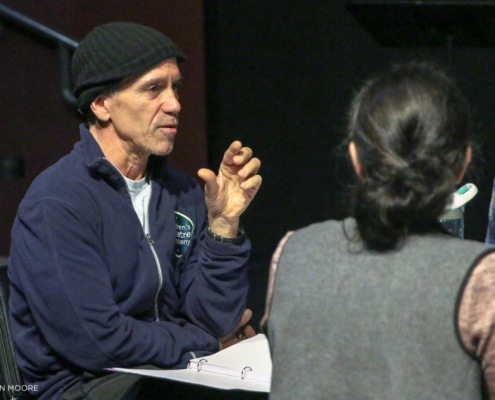 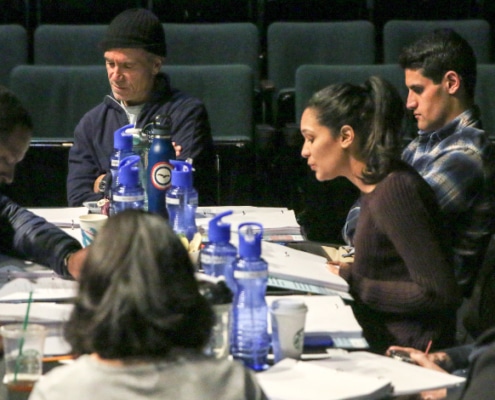 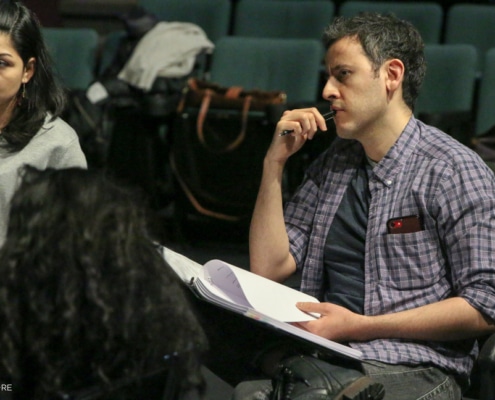 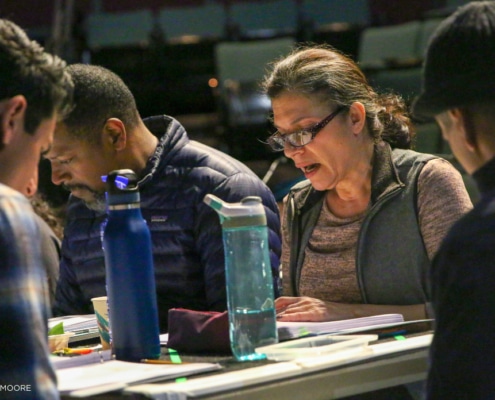 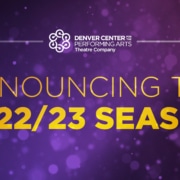 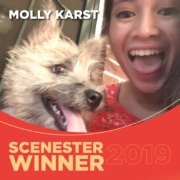 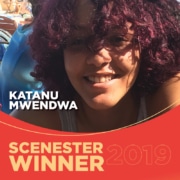 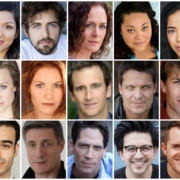 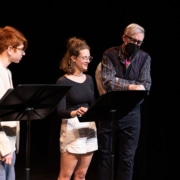